Last September, a team of computer science professors at the University of Michigan introduced an application developed in their research lab that they believed would change the way consumers would do banking in the future. Combining the science and technology from academia, with the needs for a better voice-first mobile banking capability, Clinc won ‘Best of Show’ honors at Finovate in New York City with their Finie (“the financial genie”) application.

The intelligent personal assistant uses sophisticated natural language processing engines that have been trained with a deeper knowledge of the financial and banking industry as opposed to using a rules-based approach. Unlike solutions that currently exist from Siri, Alexa and Cortana, Clinc’s machine learning capability allows the application to expand knowledge and improve responses with every query. By identifying and analyzing dozens of factors like speech patterns, word structure and sentiment, Clinc is able to understand, to remember and to respond to unconstrained, contextual, messy human language.

In a display of market need and institutional confidence, USAA has partnered with Clinc, integrating Clinc’s artificial intelligence platform with the existing Alexa skills at USAA. Initially available as a pilot program at USAALabs.com, members of USAA can personally test the first natural, human language conversational, non-chatbot AI.

“You can talk to it like it’s a person,” said founder and CEO Jason Mars, who is a professor of computer science and engineering at the University of Michigan. “It’s different from other chat bots on the market right now in that the user doesn’t have to remember specific ways to ask questions or speak any key words.” We’ve never taught this thing a single rule,” said Mars during his Finovate presentation. “We’ve trained it with experience and examples.”

With no specific rules or commands to learn, USAA members will receive an experience that feels like an intelligent human conversation. “Our members deserve great experiences each and every time they interact with us, regardless of how they choose to do so,” said Darrius Jones, assistant vice president, USAA Labs. “This pilot is designed to better replicate the interaction members would have with a USAA service representative on the phone, allowing our member service representatives to handle more complex member needs.”

As opposed to using specific customer data, the Clinc solution can plug in seamlessly to a mobile app and other digital products using an API (outside the core). According to Mars, “The apps used by financial institutions already interface to the core and [our  solution] can just use the data from the apps directly. This is how we partner with financial institutions to get the Clinc experience to their customers.”

“Clinc’s conversational Voice-First technology is in a category by itself,” states Brian Roemmele, Voice Technology Industry Influencer  “They have captured the essence of the typical interactions one would have with a personal banker. The natural interactions allow for deeper relationships with the customer. And the difference between a Voice-First interaction and a typical app is quite remarkable. Clinc’s work shows the future.”

How Does Conversational AI Work?

At the core of the solution from Clinc is the desire to create an AI where a customer/member can ask a specific question and get an accurate answer seamlessly. “We wanted to create an experience where the user can push a button, ask a question without thinking about how they had to ask it, and get a precise answer.” 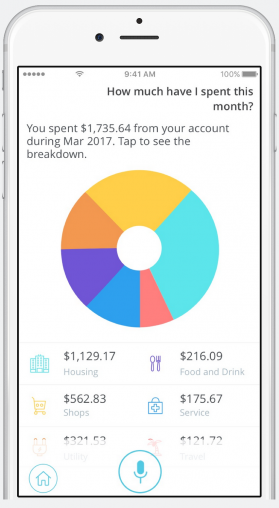 Request: “How much money did I drop on restaurants when I was in Chicago last year?”

Request: “Okay well how about just in Michigan in the last month?”

Response: “You spent $120.57 from your accounts on Restaurants in Ann Arbor, Michigan, which is 46.66% of your Food and Drink spending over the last one month.”

Request: “Well is it okay if I bump that spending up to $300 on dining out next month?”

Several other organizations are testing conversational AI for banking services, most notably Bank of America with their Erica solution. “Erica” — a play on the bank’s name — will be available inside the bank’s mobile app in the near future. Customers will be able to chat with Erica via voice or text message.

Erica will also use artificial intelligence, predictive analytics and human language messaging to help customers do things like checking balances, making payments, setting aside funds or reducing debt. As with the USAA solution, Erica will learn from a customer’s transactions, offering more to customers, like insights and advice, more proactively instead of merely reciting the information.

“In the next 18 to 24 months, the path is about how much functionality we can give Erica,” said Henry Agusti, digital banking executive at Bank of America. “We really want to make sure she’s able to help clients and customers execute on a lot of functionalities from day to day. That requires a deep level of [technology] integration.”

The bot is now in the beta testing phase.

Much of the rest of the industry may be falling behind. According to Celent, 85% of financial institutions agree that AI will have a significant impact on banking in the next three to five years. Unfortunately, only 32% indicated they’re making any direct investment into AI technology. Half of the banks surveyed indicated that the expense of integrating AI is a major concern.

According to Roemmele, “The next 10 years we will see the rise of Voice Commerce, Voice Payments, and Voice Banking on Voice First devices from Amazon, Apple, IBM, Microsoft, Google, Samsung and many others. Voice Banking is a natural extension to Voice Payments on to Voice Commerce. The impact is so wide and deep, it will change everything we have seen in the last 50 years.”

With USAA’s Alexa solution from Clinc and Erica from Bank of America, we have taken a large step into this Voice-First revolution.