Subscribe Now Get The Financial Brand's FREE Email Newsletter
The USDF Consortium navigates carefully to distinguish its bank members' plans from the troubles seen in the nonbank stablecoin sector. It's not just a matter of optics but also intentions.

Even before the “crypto winter” or “crypto meltdown” — pick your favorite temperature extreme — Washington was looking at stablecoins. This family of digital assets prompted a Presidential working group report and lay behind portions of an executive order released in March 2022. The order set an ambitious agenda to develop policy in the areas of stablecoins, cryptocurrency, central bank digital currencies and other digital assets.

Many of the headline-grabbing setbacks in the stablecoin world have not directly involved banks. But the ripple effects touch on virtually all firms in the business. The multibillion-dollar crypto industry doesn’t exist in some kind of financial vacuum.

In theory, stablecoins are digital assets that hold their value, pegged to a specific real-world currency. The idea is roughly equivalent to the way money market fund shares are denominated in $1 amounts to resemble deposits in traditional financial institutions.

In the fast-evolving world of digital assets, terminology and technology both tend to move around. At the beginning of 2022, USDF Consortium, a group of banks working on blockchain solutions for the industry, was calling its “USDF” — U.S. Dollar Forward — a stablecoin. Along the general lines of stablecoins, USDF will be denominated in $1 amounts and held to that.

“Use of the term ‘stablecoin’ was meant as a frame of reference to the broader category of tokenized money,” explains Robert Morgan, who became CEO of the consortium in July 2022. “Because there is no well-defined taxonomy of the space, the term ‘stablecoin’ has increasingly come to represent a narrower set of business models.”

Indeed, when the cryptocurrency et al executive order came out, some elements of the cryptocurrency and digital asset industry — including USDF —welcomed it as an opportunity to bring some regulatory clarity to an often confusing situation.

To many banks and credit unions all this may seem very leading edge. Morgan, who was previously head of the innovation office of the American Bankers Association, thinks this is shortsighted.

A few months after publication of the executive order, the stability of stablecoins as a sub-industry didn’t look so good, as the stablecoin TerraUSD crashed. In early May its $1 valuation fell as low as 23 cents and as of late summer 2022 it was worth pennies. Another major privately owned stablecoin, Tether, dropped slightly below $1 before recovering while another, USD Coin, held onto its $1 valuation during the crypto market’s turmoil.

Partly as a result, the term “stablecoin,” as it had evolved, didn’t fit USDF any longer. The founders of USDF include a group of banks; Figure Technologies, which develops blockchain financial services applications; and JAM FINTOP, a community bank tech investment group.

The intent from the beginning had been to create a mechanism to provide fast processing 24/7 of interbank transactions on behalf of customers through the Provenance Blockchain, with additional banking-style transactions coming along, also on that blockchain. Even before the TerraUSD crash, the consortium increasingly spoke of what it was doing as creating a form of “tokenized deposit.” Among the functions contemplated are business-to-business and person-to-person payments and merchant payments.

Not all stablecoins are created the same way. One group, including Tether and USD Coin, is built on the idea that the stablecoin is backed dollar for dollar by a basket of financial assets. Another concept, used by TerraUSD, is the “algorithm” approach. In brief, such stablecoins rely on a complex process of financial engineering. In TerraUSD’s case, the process broke down rapidly and impacted multiple cryptocurrencies along the way.

Such stablecoins are meant to be actively used for buying cryptocurrency and for other types of trading in the digital assets world.

As Morgan explains, “tokenized deposits” are different. “It’s a reference to an existing bank deposit which is held as a liability against an insured depository institution,” says Morgan. “Tokenized deposits are not designed to be purchased at exchanges, but function as an infrastructure layer to make bank payments more efficient.” (There’s another aspect, fractional reserves, that we’ll come to later.)

USDF “is not trying to create a bridge towards the crypto ecosystem that exists,” says Morgan. “We’re trying to help banks build on a new ledger technology (blockchain) for traditional financial services.”

“For a long time there was a narrative that the value was in the underlying [blockchain] technology, not the coins,” continues Morgan. “But it turns out the coins are still really important, and that’s because the coins are what allow you to ‘talk blockchain’ together.” The idea is to engage in traditional financial services but through blockchain technology, which can include such features as smart contracts, which are self-executing and self-enforcing, in time. One such application would be automation of advances on construction loans as a project hits milestones.

The schematic of a USDF transaction — none have happened yet beyond testing as the consortium and members are still navigating regulatory processes — is an evolution of one published on The Financial Brand earlier this year. 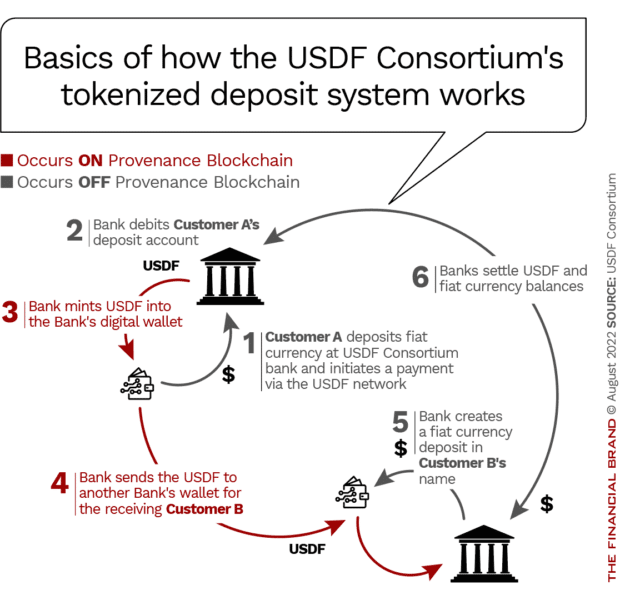 Read More: The Future of Central Bank Digital Currencies in the U.S.

Concerns about the stablecoin business have grown in Washington. Legislation pending in both houses of Congress deal with regulation of the stablecoin business. Much remains behind the scenes but momentum has been reported in the press for creation of an approach that would permit regulated banks to create stablecoins, subject to federal rules.

Meanwhile, non-bank entities that want to offer stablecoins would have to submit to Federal Reserve supervision. Being creatures of the blockchain world that would be a very new experience for them. Broadly the legislation is not expected to move beyond current negotiations until sometime in the fall.

“We don’t think we need explicit legislation to move forward with what we’re doing, because we think that banks have the legal authority under current frameworks to engage in these activities,” says Morgan.

USDF Consortium sees blockchain, used as it proposes, being a faster and more efficient form of ledger than many core processing systems.

Greater regulatory clarity would help, Morgan says, as institutions must seek agencies’ approval before moving into these areas and regulators haven’t established clear guidance for those seeking their approval.

In late summer 2022 comments arrived at the Treasury Department regarding the regulation of the stablecoin market, in response to a request for input. Viewpoints of traditional banking institutions of all sizes were represented. For example, the Independent Community Bankers of America stated that “Community bankers are increasingly alarmed by the risks presented by digital assets, including scams, misrepresentations to consumers, and a growing potential for these digital assets to threaten the financial stability of the traditional banking sector.”

An ongoing concern for banks in this area, and a key one for USDF, is the role of fractional reserves. A classic function of commercial banking intermediation of deposits is creation of new money through lending. Lending creates new deposits which, subject to capital rules, can create more lending. “Fractional reserve banking,” as it is called, can drive economic growth, and banks have been doing this for hundreds of years.

By contrast, the stablecoin concept, and what Congress has been leaning towards, calls for a one-to-one relationship, every $1 of stablecoin matched by a $1 of value behind it. Banks have been concerned about this idea in this context as well as in the development of concepts in central bank digital currency, especially if U.S. CBDC were issued directly by the Federal Reserve.

In its comments to Treasury, USDF makes a key argument: “Tokenized deposits … are the digital representation of existing liabilities — demand deposit claims — that a bank has on its balance sheet. Importantly, tokenized deposits are obligations of banks…”

Morgan says it’s critical for tokenized deposits to maintain a niche apart from stablecoins as legislation and regulation move forward.

“It’s important to maintain that separation,” he says, “because if you’re requiring full reserving, you’re forgetting the intermediation function banks serve and the credit creation function they provide.”