Subscribe Now Get The Financial Brand's FREE Email Newsletter
The pandemic accelerated digital banking adoption, with the reduction of branch visits by consumers reflecting a shift of transaction and engagement behavior. The question is whether these trends will continue, and what the response will be from financial institutions that are rethinking their service model and trying to reduce the cost of branch networks.

Financial institutions are continuing a trend of reassessing the way consumers and businesses are served in an increasingly digital banking ecosystem. According to S&P Global Market Intelligence data, banks and credit unions in the U.S. closed almost 4,000 branches and opened more than 1,000 new physical facilities during 2021. This activity resulted in a record net number of branch reductions of 2,927 according to the analysis, a 38% jump compared to the previous 12 month period. 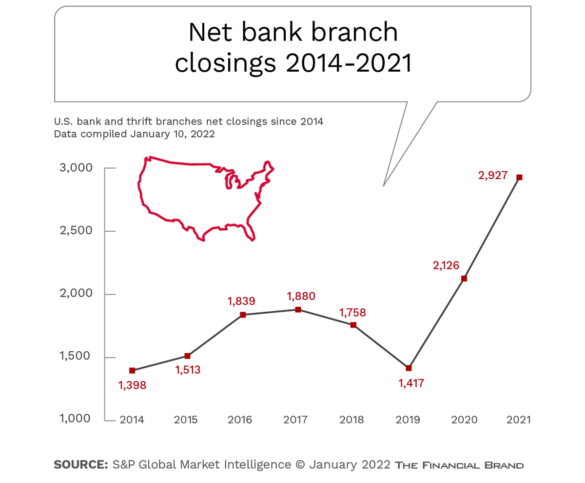 Beyond the shift in consumer banking transaction preference, the closing of branches reflected a significant increase in bank consolidations, with merger and acquisition deals exceeding $77 billion in 2021. This was the most activity since 2006, according to S&P Global. In most of these instances, financial institutions closed branches where multiple offices were located in close proximity to each other.

The question becomes whether the escalation of net branch closures will continue to gain momentum in future years or if financial institution branch consolidation will stabilize?

While the highest number of net closures happened at the largest financial institutions, such as Wells Fargo, U.S. Bank and Truist, the biggest percentage impact on overall branch network size occurred at Banco Santander (16.7%), Huntington (16.5%), Capital One (13.7%), and Hancock Whitney (13.7%). Some of these more significant changes were associated with M&A activity that had recently occurred. In other cases, such as with Capital One, the consolidation was attributed to changing customer preferences. The Capital One branch network has fallen steadily from 702 across the country in 2016 to 327 in 2021.

“Our customers are increasingly engaging with us digitally”, stated Capital One spokesman Derek Conrad. “We continue to see steady growth in mobile banking, online banking, enhanced ATMs, remote deposit capture, etc., however, we know that many customers still value some physical presence to provide assurance, advice, and the ability to facilitate and support some transactions. Our goal is to deliver a compelling and optimal customer experience across all channels, not just one.”

While other banks focus on consolidating branches, Chase closes and opens branches within and outside their existing footprint driving growth through digital and physical channels.

Chase was the sixth-largest net branch closer last year, however, the company also opened the most branches in 2021, with 169 new locations added as it strategically opens branches in under-penetrated markets. Combined with its significant investments in digital channels, Chase is a leader in creating a contrarian delivery strategy where digital and physical converge to drive sustainable growth. 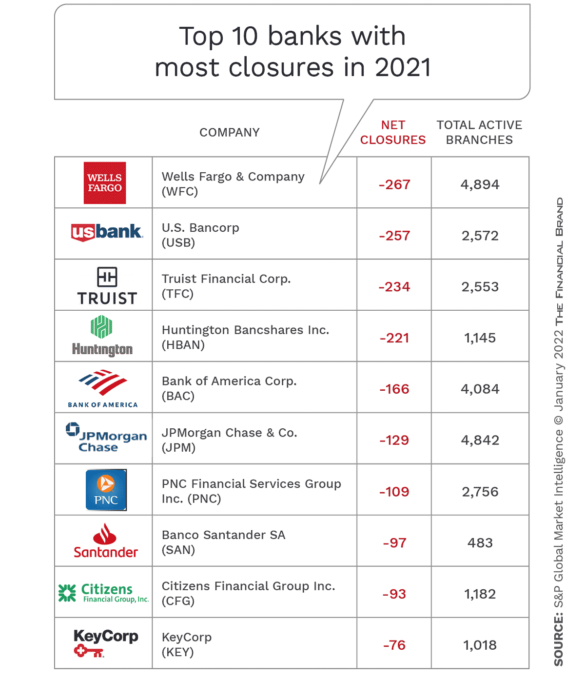 Among community banks, Heritage Financial Corp. (Olympia, WA) had one of the higher closure rates, shutting down nearly 18% of its footprint in 2021. The bank stated in an earnings call that it saves roughly $250,000 per year, per branch closed. Heritage Financial CEO and President Jeffrey Deuel said that the loss of deposits upon closing branches has been much lower than in the past (under 10%), attributing this to consumers shifting transactions to digital channels.

If recent branch network reduction trends continued unabated, bank branches could be extinct within 10-15 years. But, assumptions of continued branch closure momentum assumes that consumers and businesses will no longer want a physical presence. Despite a massive increase of digital channel use, research shows that a majority of consumers still prefer branches for more complex financial needs and that small businesses prefer human interaction.

A more likely scenario in the future is that digital channels will continue to supplement bricks and mortar branches for an enhanced (and differentiated) customer experience. In fact, when financial institutions were asked about branch consolidation plans, 64% of institutions said their branch network would shrink by 25% or less, 28% anticipated no change in their branch network, with 7% indicating their physical footprint would expand in the next three years. (A single organization anticipated shrinking their footprint by more than 50%). 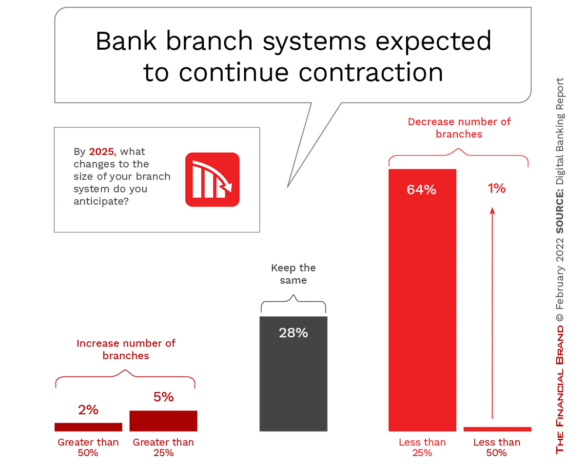 Reimagining the Delivery of Banking Services

When financial institutions were asked what would drive their branch network reinvention, 42% of banks and credit unions indicated the desire to improve efficiency (reduce costs), 38% stated that the focus would be on improving the overall customer experience, with 10% noting that the delivery strategy would be driven by advancements in digital technology. A much smaller percentage of financial institutions stated their branch strategy would be driven by fintech/neobank competition (7%), with 3% saying their strategy was based on a desire to expand their overall markets served.

Whatever strategy is selected, it is evident that bank branches are no longer the transaction hubs they once were. While there are still a large number of full-service branches in virtually every city, town and neighborhood, the demand for services continues to shift away from transactions and more toward delivering more efficient digital engagement, building 1:1 advisory relationships, offering differentiated services, and/or creating alternative uses for space (coffee shops and community rooms).

The Future of Bank Branches:

While many more branches will disappear in the future, those that remain will look much different than they do today.

The focus in all instances will be on driving efficiencies while creating loyal new and existing customers. Increasingly, this also includes an expansion of localized small business and commercial banking services.

As an example, PNC Bank has been opening 2,500-square-foot “solution centers” in place of some branches, allowing customers to interact with staff and conduct transactions using video teller machines, mobile work stations, ATMs and other digital tools. The centers do not resemble traditional branches, where staff and customers are intentionally separated.

This shift in the way consumers want to do banking will continue to have a significant impact on how financial institutions deliver services and the role of the bank branch. While branches will not disappear, they will be far less the center of banking transactions and more the center of advice and consultation.