Subscribe Now Get The Financial Brand's FREE Email Newsletter
Instead of setting a percentage budget-cut figure, CMOs and CEOs would do better to evaluate what can go and what's essential in the marketing budget. Frank discussions can lead to elimination of out-of-date legacy practices and setting triggers for new spending.

Many financial marketers will face budget cuts going into 2023. The difference between budgetary surgery and unfocused slashing will depend on how well bank marketing chiefs can make their case to senior management.

Doing so will hinge on how well they can learn to speak the language of CEOs and CFOs and to tailor their requests to a mindset shaped by inflation and recession concerns. Even if some cuts become inevitable there are strategies for using them as an opportunity to make tough decisions that have been punted to date. And other strategies can be set in motion now in order to regain budget more quickly should conditions improve more rapidly than anticipated.

The fundamental argument these steps begin from is the belief that marketing fulfills an essential purpose — producing growth, according to Jason McNellis, Senior Director Analyst in the Gartner Marketing Practice.

“If you think marketing is an investment for growth, then cutting it has tradeoffs that must be considered,” says McNellis in an interview with The Financial Brand. “That doesn’t mean it should never be cut. But I’m a firm believer that marketing does work. And if you are in an organization where that’s the case, then there’s absolutely an opportunity to push back against proposed cuts.”

In one of a pair of reports on marketing budgets, McNellis explains that the goal is not to eliminate marketing budget reductions, but to ensure that organizations retain sufficient marketing muscle to outmaneuver their competition in the uncertain period ahead.

In crafting ways to help marketers retain budget dollars, McNellis says he has drawn not only from research among CMOs, but also Gartner’s research among CEOs and CFOs across multiple industries.

Understanding the viewpoints of the latter two groups “can help you with some of the storytelling around parts of your budget that might make it easier to defend,” McNellis explains.

A Different Kind of Cutback:

Gartner research indicates that CEOs and CFOs will likely avoid the across-the-board percentage budget cuts that were mandated in the wake of the pandemic.

Gartner believes senior management will tend to prioritize maintaining certain spending that they see tied to growth, such as costs related to digital transformation. In addition, in the current tight market for talent, recruitment remains a priority and efforts will be made to maintain spending there, though with adjustments.

Here are four key ideas from McNellis for navigating this unusual budget season.

When banking budgets come under pressure the return on investment of every buck gets scrutinized. Looking at the ROI of marketing expenditures in isolation is not only misleading but not even an accurate way of examining spending, McNellis argues.

The error begins with the viewpoint that marketing represents an asset that’s invested in.

“In pretty much 100% of the organizations I talk to, marketing’s an expense. That’s literally the way that they see it,” says McNellis. “So this idea of marketing ROI doesn’t necessarily make sense.”

McNellis thinks CEOs and CFOs fall back on such usage because it’s a key way they view the world. But he says what they really mean is far different.

“What they’re asking for — and where the opportunity is for marketers — is proof that you’re being a good steward with the resources they’ve provided.”

Beyond that, they want to be sure that the marketing function can tell when marketing strategies are working and when they aren’t, and how readily they make changes. Building a understanding supporting that establishes trust. McNellis says he has known marketers to actually gain budget when they demonstrate they are good, knowledgeable stewards.

While not foolproof, using ROI thinking can contribute to an overall understanding of how well the marketing dollar gets spent, according to McNellis. But it’s critical to use it in conjunction with multiple measures, not by itself. 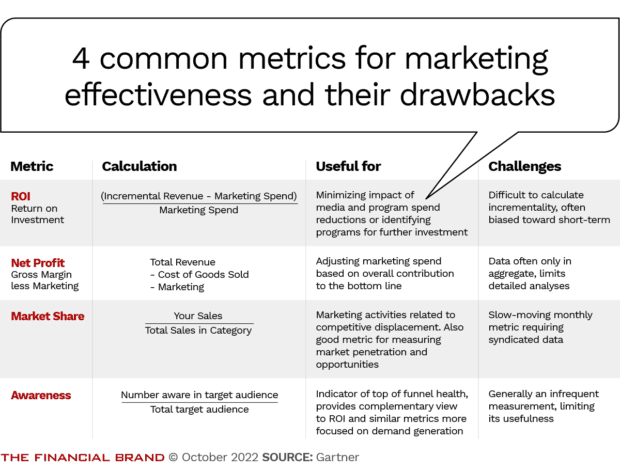 To illustrate the pitfalls of ROI blinders, McNellis points out that a 10% cut in marketing spending can make it look like ROI is improving. However, the reduction in volume that comes from that slash will reduce net profit in the end, which undermines ultimate performance. An institution that can work on cross-selling and up-selling existing customers may be able to make this work better than an institution whose current business model hangs on bringing new customers to the bank.

2. Don’t Expect Everything to be Measurable

McNellis advises using multiple measures to evaluate marketing spending and warns against “cherry picking” among different measures simply to make the best argument for not cutting something from the budget. He endorses the idea of adopting the viewpoint of “return on objectives.”

However, the consultant cautions that measuring some aspects of marketing still defies the goal of direct correlation between cause and effect.

For example, McNellis says that digital marketing has been notoriously difficult to measure precisely. There are multiple reasons for this.

One is that it can be difficult to prove that digital campaigns directly drive sales.

McNellis is a scientist by background and his training tells him to isolate a factor and see how changing it affects a process like sales. It’s hard to do that in digital marketing.

“There are more channels going on simultaneously these days,” says McNellis. Which one really influenced the decision to buy? It can be hard to say for sure. Efforts to stop advertisers from tracking behavior have taken a toll, also.

“If I’m on DuckDuckGo and I visit your website, you won’t know it. How are you going to take credit for that sale?”

Read More: What to Cut, What to Keep as Bank Marketing Budgets Get Squeezed

Often budgets contain spending deadwood that no one has gotten around to eliminating. When budget cuts become inevitable, this is a time to look at those items, according to McNellis.

“Many marketing teams overindex in legacy processes and skills. Use cuts as the ‘burning platform’ to lower the organization’s long-term cost base and accelerate simplification, consolidation, automation and outsourcing decisions,” he writes in his report, “How CMOs Defend Budgets During Inflation and Economic Uncertainty.”

The term “burning platform” refers to a business anecdote in which an off-shore oil rig worker awakens to an out-of-control fire. Faced with a choice between certain incineration on the burning platform and the chance of survival after leaping into the freezing sea, the worker jumps. Under ordinary circumstances, there is no way the worker would risk exposure in icy water.

“Change is tough,” says McNellis, “and so marketers can use mandatory cuts as a burning opportunity.” Urgency to cut marketing spending can get over the friction of making essential changes, McNellis adds.

When bank marketers have to take a budget cut, they naturally hope to get those dollars back someday. McNellis says that marketers have not had many chances to claw back budget dollars in 2022, given the inflationary environment and general economic turbulence.

Negotiating for the establishment of triggers for reinstating budget items help in multiple ways.

“The executive team did not cut marketing because it is unimportant,” writes McNellis. “If that was the case, the triggers would not be necessary. The executive team made a considered, yet hard decision in the face of economic uncertainty. If their scenario’s assumptions do not play out, it may be time to reinvest in marketing.”

Examples of triggers would be a competitor ramping up marketing spending and a noticeable loss of market share.