Subscribe Now Get The Financial Brand's FREE Email Newsletter
Quontic Bank has made a name for itself as an institution that likes to try out new digital ideas, in part to please a fan base that has developed beyond the young tech-savvy market it originally aimed for. Here's how the ideas germinate.

For most financial marketers federal deposit insurance is such a basic of the banking business that you just don’t mess with it. Consumers assume that it’s there, in the background, the same way people expect the lights to come on when they flip a wall switch.

And yet there was Aaron Wollner, CMO at Quontic Bank, testing whether highlighting FDIC insurance on the bank’s website was important to people.

Wollner loves data analytics, so much so that his marketing team of 15 includes a vice-president of analytics, who has her own team of three.

“I just love hanging out with them because they’re pumping out a really awesome dashboard of analytics insights that are driving Quontic’s whole business forward,” says Wollner. The “hanging” is figurative as the digital bank is a remote operation.

So why, of all things, test mentions of FDIC coverage?

Wollner’s explanation underscores why analytics can be so critical today.

What’s At the Top of Your Bank’s Home Page?

“You have to question the basics, sometimes,” Wollner states. Quontic is devoted to continuing to evolve as an innovative digital bank and he believes this requires questioning everything about the status quo. He’s a big believer in the power of A/B testing, for example, and “our testing road map is quite robust, so we leave room for even some of the more obvious questions.”

He likes asking obvious questions because they sometimes turn up truths that may challenge longstanding assumptions. In other words, what’s not so obvious.

Indeed, when the data team tested removing mention of FDIC coverage at the top of the bank’s home page, the initial results seemed to suggest that it wasn’t as important to highlight deposit insurance as traditional bankers would assume.

But this approach must be tempered. Though he loves data, Wollner recognizes that you have to step back from the numbers sometimes and mull what they mean and how significant they are — are they really saying what you think they are saying?

In the end, with the FDIC matter, he says, they got over being wowed by early results and decided to continue testing the concept since it is so fundamental.

But why did this come up in the first place? Wollner says that most people who arrive at Quontic’s website for the first time haven’t likely heard of the small bank before. The bank doesn’t advertise on the level of large retail banking leaders. So he wanted to see if, in this day of fintechs and neobanks, utilizing valuable web page real estate for highlight deposit insurance was essential.

Data Drives What Goes At the Top of the Website

The same kind of thinking was behind Wollner’s decision to feature a single product at the top of the bank’s webpage.

“In the olden days of bank websites, we would have featured an ugly rotating banner with little circles on the bottom, right? The prevailing assumption is that you have to promote the three most important things the bank offers,” says Wollner. (Actually, that describes many current banking home pages.) 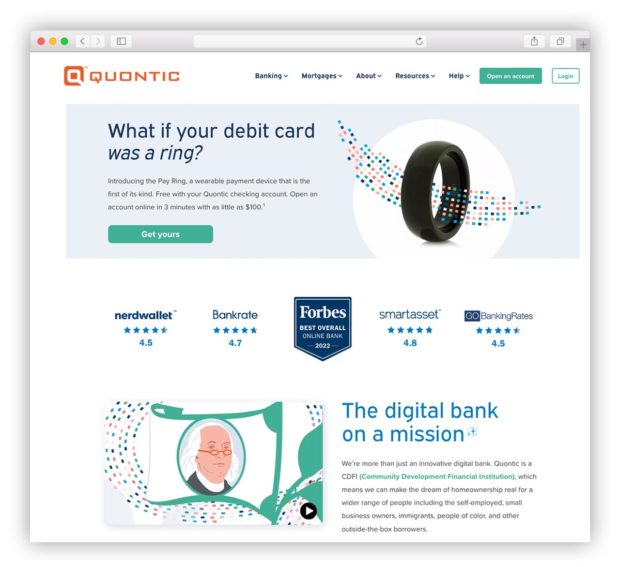 Wollner says it’s more important to think about what the customer or prospect might find interesting, which you can’t guess at. At this writing the topper is a single promotional banner for Quontic’s payments ring.

He didn’t wing that choice. “We tested it,” he explains, “and that’s just one example of the type of observation you want to make instead of just doing what folks always do.”

Being a Bank CMO on the Edge of Potential Stagflation

Wollner has spent most of his career in positions doing work that touched on financial services. But when he joined Quontic in the summer of 2020 as SVP of Marketing it was his first job on an actual bank staff. Quontic hired him because it wanted to be marketed more like a fintech, which reflected much of Wollner’s experience. He was promoted to CMO in early 2021.

As a consultant, Wollner visited one major financial company twice a week for a year and a half. He found it frustrating.

“That place was not alive, it was not lit up with ideas and energy,” says Wollner. “So that was my perception of banking. I think a lot of people share that perception, a business that’s stodgy and almost intentionally slow.”

He says Quontic’s game plan, moving from community bank roots to digital banking with an asset mix devoted to community development lending in the form of unconventional mortgages, had appeal.

Even though the mortgage business is going through rough times and the economy will likely be further troubled, Wollner thinks it is critical to keep perspective. He’s been through some scary times as a marketer, including a stint consulting at AIG when it was given a federal bailout in 2008 during the financial crisis.

“Headlines are scary today and anyone with a microphone is saying things will get much, much worse. But I do my best not to operate from a place of fear.”

He says it’s a given that ups and downs occur in finance, and marketers, like the rest of the business, has to roll with it.

“The sun will shine again,” he says.

Wollner says something that’s been somewhat helpful in weathering the current mortgage market slump is Quontic’s niche as a for-profit community development financial institution. A key specialty is mortgages for the self-employed, immigrants, gig economy workers and others who can’t necessarily document their income sufficiently to obtain conventional home loans.

How Quontic’s Audience Evolved and How It Appeals to Them

As Quontic first began to move towards becoming a digital institution its initial target marketing personas were young, digital-first, tech-savvy people. Wollner says the target has moved somewhat as other people were drawn to Quontic.

He explains that data analytics helped the bank develop a more nuanced view of where its appeal lies. The original audience remains part of the picture, he says, but the people opening accounts at Quontic are older than expected.

“We used to have a picture of a cool young person who’s super tech savvy, has an iPhone, and blah, blah, blah. Well, everyone has an iPhone these days.”

A core demographic for Quontic now is someone who is “a bit more established, a more financially savvy person, who has a bit of money,” says Wollner. He believes that fintech activity over the last decade or so has leveled up the financial consumer in many ways. When he meets people socially, he says, conversation often turns to the financial apps on their phones.

Why They Took a Plunge Into the Metaverse

Beyond the higher rates Quontic pays because it doesn’t have branches, a key to developing its audience is trying out new, on-the-edge digital activities.

“We’re not just taking random swings and putting what we think is cool stuff out there,” says Wollner. “We have a thoughtful road map, based on a commitment to ourselves to be innovative and bring new things to market. It’s about developing our fan base and doing great things people notice and care about.” 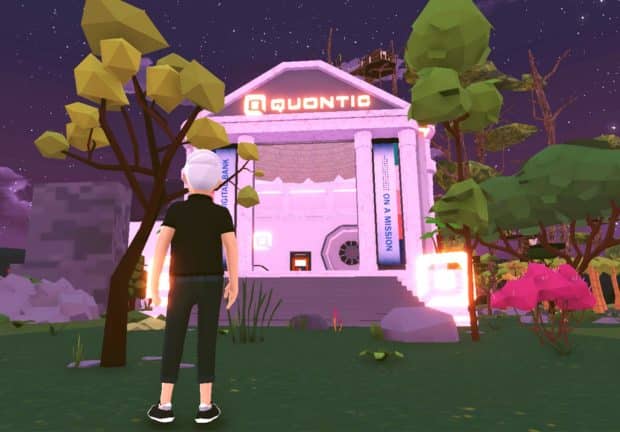 Examples include Quontic’s introduction in 2022 of a wearable payments device, a ring tied to its debit cards, and establishment of the first bank outpost in the Metaverse outside of the big banks. These efforts and others are about appealing to the fan base’s imagination and testing the waters.

The Metaverse outpost concept came out of Wollner’s group.

“If you close your eyes and picture the Metaverse, and you ask nine other people to do that, you’d probably get ten different images, because it’s not really clear yet what it is,” says Wollner. He says Quontic thought people would be interested in trying it out.

Speaking of “testing the waters,” the Metaverse location opened with pool parties. One was for staff and then a much larger one was held for customers and other members of the public, attendees coming as avatars. (Located in Decentraland, it includes a back yard with a virtual pool and a DJ station.)

“We didn’t do this entirely for brand PR, but that was no small reason,” says Wollner. “We got really good coverage from it. Whenever we can cement our brand with really good, meaningful stuff like that, it helps us with momentum.” The plan is to add new interactive components to the site quarterly, to keep people coming back.

Ultimately, he says, the strategy of cultivating an innovation image requires a balance between the leading edge and stability.

“In the massive fintech space, you’ve got companies that are quick and experimental, and everybody accepts that,” says Wollner. “But they can grow and they can fall at the snap of a finger. Would you want that from your financial institution? I wouldn’t.”