Subscribe Now Get The Financial Brand's FREE Email Newsletter
Banks, credit unions, fintechs and other providers keep increasing digital advertising spending because that's where people are now. But the Consumer Financial Protection Bureau has fired a warning shot. Officials believe third-party digital marketers — and their technologies — are wielding too much control over who sees which ad campaigns.

U.S. banks, fintechs and other financial services advertisers are pouring money into digital advertising, with an increasing accent on mobile channels. At the same time, the growing ability of algorithms, machine learning and other technology to pinpoint digital prospects concerns the Consumer Financial Protection Bureau enough that Director Rohit Chopra has fired a shot across the bows of the industry and its tech ad vendors and advisors.

In a speech about digital marketing, Chopra said that “relationship banking is at risk of being completely replaced by algorithmic banking.” He believes that “our sensitive data is viewed as more valuable to firms than our actual selves.”

“For most of the public, they increasingly understand that this is not passive, traditional advertising. It is an amalgam of an ad, a private investigator, and a digital door-to-door sales force.”

CFPB issued an interpretive rule on digital marketing addressing some aspects of Chopra’s concerns in mid-August 2022, and indicated that more rulemaking is coming. Most immediately tech firms and consultancies that assist banks, fintechs and other financial advertisers to target people have to scrutinize what they’re doing — as do their clients.

Let’s examine the growth in digital marketing being seen, and then CFPB’s actions.

Financial advertising on digital channels will rise by 18.1% in 2022, higher than the growth rate in digital advertising for all industries in the U.S., at 17.8%, according to a study by eMarketer.

Financial services advertisers rank fifth in terms of growth rate, behind the leader category, retail, followed by travel, telecommunications and entertainment. However, in terms of dollars actually spent, in 2021 financial services spent the third-highest amount — $27.17 billion — behind retail and consumer packaged goods. In its digital advertising study eMarketer projects this will rise to $32.09 billion in 2022 and will eventually hit $40.22 billion in 2024.

Financial services advertisers will represent 12.9% of total digital advertising spending in 2022, according to eMarketer. 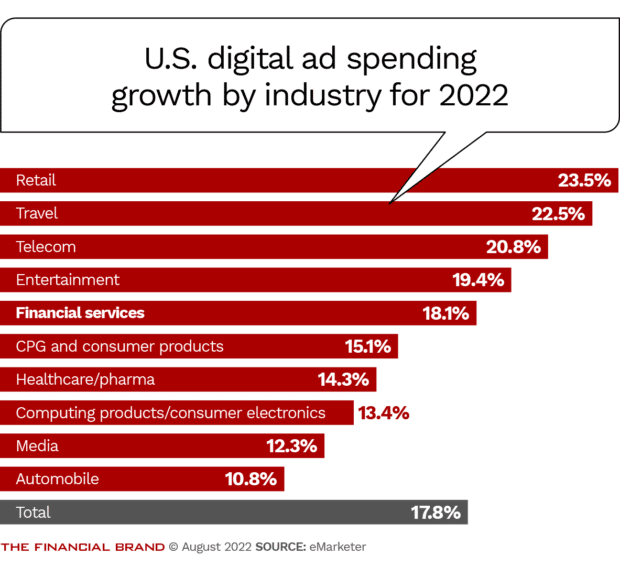 Total digital ad spending had a growth rate of 38.3% in 2021, but that year was considered an exception because it reflected a major pickup over 2020 pandemic-level spending. eMarketer projects that spending will continue to grow, though at a falling rate across all industries, moving from 17.8% in 2022 to 14.2% in 2023 and 11.4% in 2024. eMarketer characterizes the falling growth rate more as a steadying effect than flagging momentum.

The report breaks the spending into two broad categories. Overall, it found, “after years of mobile increasing its share, spending decisions seem to have settled in at a roughly two-thirds to one-third split between mobile ads and nonmobile ads.”

Banks and other financial services advertisers are more aggressive on the mobile advertising front than is typical. eMarketer expects 2022 mobile ad spending to be 70.5% of what financial firms put into digital in total. These advertisers’ spending represents the third-highest allocation to mobile ads at $22.62 billion. This comes to 13.4% of total mobile spending, behind retail, at 25.1%, and consumer packaged goods, at 15.7%.

By contrast, financial services advertisers represent 11.8% of total nonmobile digital ad spending, allocating $9.47 billion to that side of digital. That’s behind retail, at 28.7% of nonmobile, and consumer packaged goods, at 13.3%.

The study also probed the difference in spending overall on display advertising on digital versus paid-search advertising. 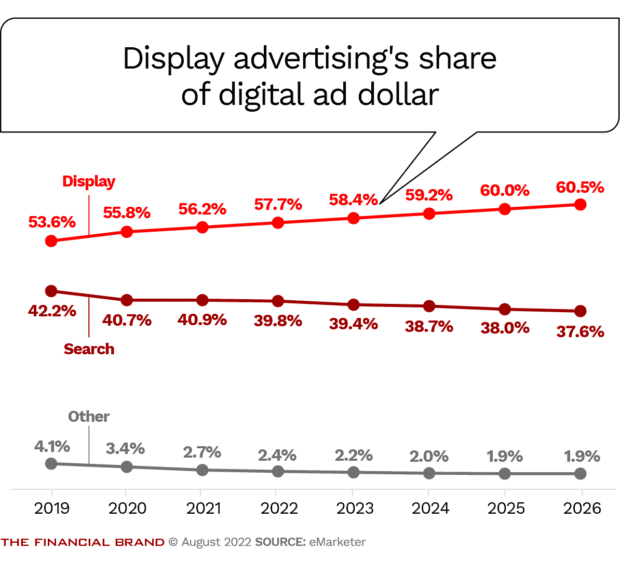 “Ten years ago, display advertising accounted for less than 40% of U.S. digital ad spending,” the study reported. “Its share rose steadily, however, and in 2017 display claimed more than half of the digital ad pie for the first time.”

By 2025 eMarketer expects 60% of digital ad spending to be going to display advertising. Financial services came in third in both display and search spending as well, behind retail and consumer packaged goods again.

Of display ad spending, financial services advertisers spend just over half of every dollar on video display ads.

Read More: How Banks Can Engage Customers Who Ignore Their Digital Marketing

Historically regulators have not held providers of advertising services accountable under rules on how banks and other players promote their products and services. This treatment came about because selling space or time was a matter of exposure and seen as a relatively passive role.

Now, under the digital marketing rule issued in August 2022, digital marketers providing services to banks and other covered entities could be considered liable by CFPB for unfair, deceptive, or abusive acts or practices, as well as violation of other consumer financial protection laws.

The bureau considers digital marketers to be playing a much more active role than providers did traditionally.

“They may harvest personal data to feed their behavioral analytics models that can target individuals or groups that they predict are more likely to interact with an ad or sign up for a product or service,” CFPB stated in an announcement. This and other active involvement in content marketing strategies could pull digital marketers out from under traditional regulatory exemptions.

Interestingly, given the high spending on digital display ads mentioned above, Chopra noted that the banner ads on websites in first-generation digital advertising were little more than electronic print ads.

Today, however, “the banner ad is targeted at an individual, and networks run by Big Tech firms and other digital marketing players can use technology to essentially follow you across the digital world with the same ad,” Chopra stated.

“More and more Americans are experiencing the feeling of being digitally stalked by specific ad content.”

Chopra also pointed out that often digital marketing platform providers are paid for converting contact with users into revenue for financial providers.

The rule itself notes that third-party digital marketers may decide which people a financial firm advertises to, even selecting the specific ad used to reach out to a specific person based on analyzed attributes.

In his speech Chopra referred to a complaint by the Department of Housing and Urban Development against Facebook, brought during the Trump administration, that involved the social media company filtering ad recipients in such a way that potentially discriminatory promotion patterns could occur. That case was settled out of court.