Subscribe Now Get The Financial Brand Newsletter for FREE - Sign Up Now
As digital payments rise sharply, traditional banking providers struggle to keep up. Here's what banks and credit unions need to know to remain competitive in the year to come — everything from digital wallets to mobile P2P and GAFA threats like Apple Pay.

“Collaboration holds the key to success in the future payments ecosystem,” says CapGemini, “and APIs (application programming interfaces) act as the collaborative ‘glue’.” Banks are working to reposition themselves to compete with agile fintech payment entrants that were built from day one with APIs, as well as the Big Tech and e-commerce companies that implemented APIs much earlier, notes the consulting and digital transformation firm.

“With payments migrating into native apps, POS software, wallets and other connected environments … banks and payment companies now have a seemingly endless list of partners to align with, running the gamut from application developers and technology partners to emerging payment gateways and ISVs (independent service vendors), says McKee in an article appearing on Forbes. ” Dealing with this more complex ecosystem requires APIs and agility to meet the needs and expectations of consumers.

APIs are not new to banking and are nothing more than a structure for how software applications should interact. But they provide the gateway for innovative, contextual solutions.

Most of the focus now is on “partner APIs” between a bank and specific third-party partners, and “open APIs.” The latter enable a bank or credit union’s data to be made available to third parties with whom they may not have a formal relationship. This category is particularly significant as open banking initiatives (e.g. Europe’s PSD2 regime) force banks to open their systems to third-party developers. While no such regulation exists in the U.S., the banking industry recognizes there are advantages to moving in this direction.

“Open APIs, combined with advanced technologies, are being used to deliver more personalized and cross-device payment options,” says Accenture. Globally, the firm points to several new payment platforms built on this foundation, among them: Zelle in the U.S., India’s Unified Payment Interface (UPI), MoneyTap in Japan, and New Payments Platform (NPP) in Australia and the U.K.

At a more granular level, open APIs can assist banks and credit unions to distribute data or services through new payment channels or devices (like Alexa), and to leverage emerging artificial intelligence applications far more quickly than with traditional methods.

Closely aligned with the open banking/API is the concept of “banking-as-a-platform” — what many in the financial industry have dubbed “platformification.” Amazon is generally held up as an example of the platform business model.

As described in an earlier article on The Financial Brand, “a platform is a plug-and-play business model that allows multiple participants (producers and consumers) to connect to it, interact with each other and create and exchange value.”

CapGemini in its payment trends report explains that changing customer expectations for more contextual and value-added offerings is forcing banks and other payment players to rethink their business models. Collaboration, whether through partnerships, or less formal arrangements, is the new name of the game as most banks no longer view fintechs as a threat, but as part of the solution. 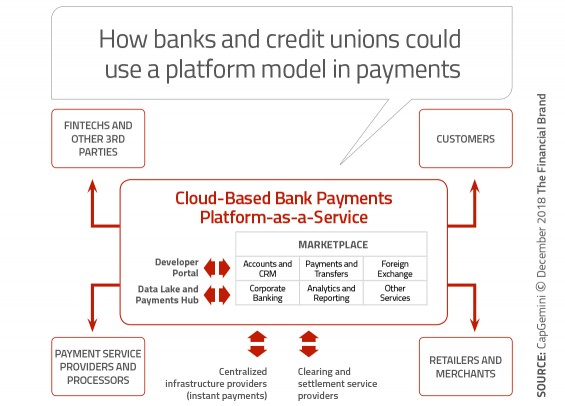 A cloud-based platform approach would allow traditional financial institutions to connect with fintechs and other third parties to create consumer-payment solutions in a single ecosystem, CapGemini explains. Such an arrangement would enable banks and credit unions to quickly scale up to meet changing consumer demands.

Deloitte agrees that collaboration through partnerships or otherwise is a way for the industry to manage payment-related investments and increase speed to market, but points out in a report that platformification is not all kumbaya. “Key issues to resolve will likely center on data sharing, who owns the customer, ease of integration, and data security.

Unlike China, where 40% of in-person spending takes place using digital wallets, the U.S. continues to move more slowly. McKinsey estimates  in-person use of digital wallets (Apple Pay, Google Pay, Samsung Pay, plus private-label wallets like Starbucks and Walmart Pay) will increase at a 45% compound annual growth rate to reach nearly $400 billion by 2022. That may sound impressive, but it will represent less than 10% of U.S. consumer in-person POS payments by 2022. McKinsey says the bulk of the growth will come from “pass-through” wallets like Apple Pay, although the private-label wallets will also continue to grow.

According to eMarketer, the number of consumers using Starbucks mobile wallet in 2018 exceeded the #2 wallet, Apple Pay, by over a million. These figures include mobile phone users who made at least one proximity mobile payment transaction in the past six months.

Digital Wallet Transactions in the Past Six Months

By comparison, eMarketer estimates that by 2022 nearly 130 million mobile phone users will use a P2P service such as Zelle, Venmo or Square Cash at least once per month.

“This will take time, and requires converting the next wave of consumers who are perfectly content with cash and cards, which work well and are accepted ubiquitously,” McKee explains.

McKee says wallet providers must do a better job of aligning with retailers’ goals, such as decreasing transaction costs, driving loyalty and courting new customers.

Even though mobile wallets have not taken off in the U.S. as expected, their success in China and other countries suggests that the potential is there… and quite large.

“There is a rise in demand for seamless and integrated digital payments methods,” CapGemini notes. “As the [payments] industry moves to a collaborative ecosystem, the adoption of mobile wallets is expected to gain prominence.”