When researchers compared financial services providers to popular consumer brands, they revealed exactly how big the "experience gap" is in the banking industry.

In a report based on a major survey of consumers in 17 countries, the Deloitte Center for Financial Services pits consumers’ favorite brands up against financial institutions to gauge people’s feelings and sentiment about their primary banking provider.

As you might expect, consumers felt non-financials delivered more value than banks via an exceptional digitally driven consumer experience, saying companies like Amazon, Apple, Google, and Microsoft outshined banks with respect to both quality and convenience.

Granted, Deloitte used a tough yardstick for its analysis. Few organizations in any industry could ever dream of keeping pace with big tech brands, and the bar is particularly low for banking. So it’s no surprise that financial institutions lagged behind such giants anywhere from 12 to 25 percentage points along six key metrics Deloitte studied. 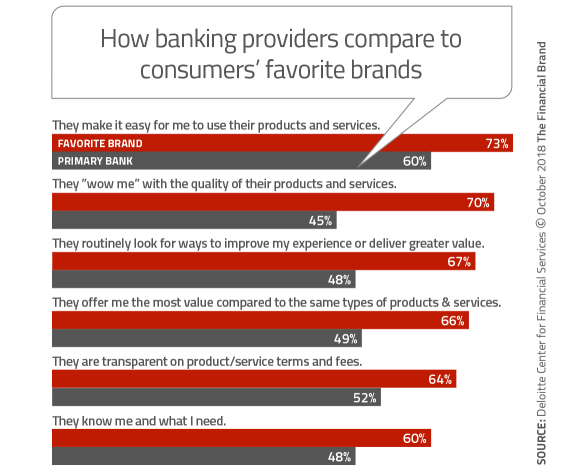 And yet the study found that consumers were generally satisfied with their primary banking providers, saying they would readily recommend their institution to friends and family. Deloitte found that among the top quartile of these consumers saying they favored their primary bank, there was a clear correlation between their degree of satisfaction and the number of product relationships they had with their institution.

Deloitte’s conclusion? As banking providers engross themselves in “omnichannel digital transformation strategies,” they can’t lose sight of the importance of customer satisfaction. Financial marketers must remain vigilant, and pay close attention to how they are making people feel so they can build such “sticky relationships.”

Deloitte parsed the findings in its report by dividing financial consumers into one of three segments:

1. Traditionalist. This group represented 28% of the survey sample. These light digital users do most of their banking at branches and ATMs. One in four have never used online banking, and 44% have never used a banking app.

2. Online Embracer. They are much more digitally engaged than Traditionalists, but they prefer online over mobile apps. 43% of respondents in the survey fell into this group.

3. Digital Adventurer. They exclusively use online and mobile channels for most transactions. Their mobile device is their channel of choice. They love digital P2P payments. Adventurers tend to transact more frequently than an Online Embracer, accessing digital channels ten or more times monthly. These consumers represented 28% of the respondents. The majority of Adventurers are Millennials. 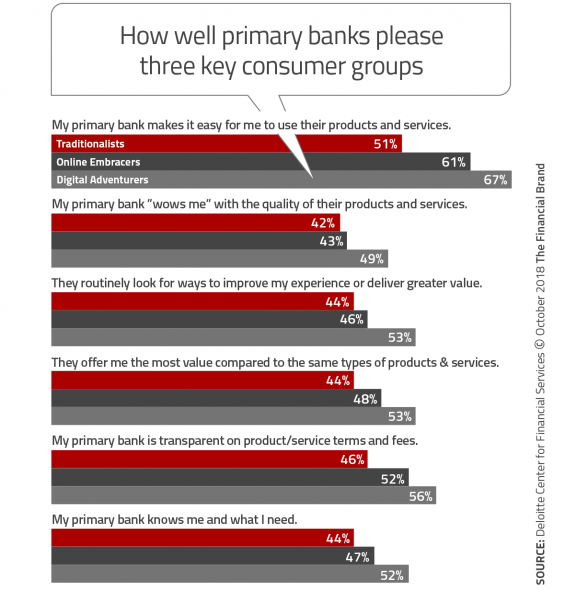 “Compared to Online Embracers or Traditionalists, Digital Adventurers demonstrate the highest levels of satisfaction and advocacy for their primary banks,” Deloitte notes in its report. “They also generally express a deeper emotional engagement with their primary banks.”

From the survey’s findings, it might be easy to conclude that all a financial institution needs to do is bump more people into the Digital Adventurer camp. Just find ways to get holdouts to adopt more mobile and digital solutions, and everything would be great… right?

Deloitte says banking providers have a long way to go with digital satisfaction levels when even their most satisfied and engaged consumers are significantly more impressed more by big brands.

Reality Check: While it may seem unfair for Deloitte to use a yardstick like Amazon or Apple as the basis of comparison, you have to remember that this is exactly what consumers do. They constantly use their experiences with other brands in other industries to evaluate and judge the other companies they interact with — including banking brands.

This is a huge concern for analysts at Deloitte who worked on the study. In their report, they wondered what might happen if consumers’ favorite tech brands decided to get into the financial services game. Because big tech firms clearly have the edge when it comes to meeting people’s expectations, its likely that such a move would strain even the most “sticky” relationships in the banking world.

Deloitte’s report looks at a huge cross-section of consumers, comparing usage across countries in three continents. Some interesting trends and contrasts emerged.

For starters, the U.S. (highlighted in red type below) still demonstrates a strong Traditionalist bent, higher than 14 of the 17 countries surveyed. By comparison, the U.K. — home to many of the world’s “challenger banks” — has exactly twice the level of Adventurers as does the U.S. 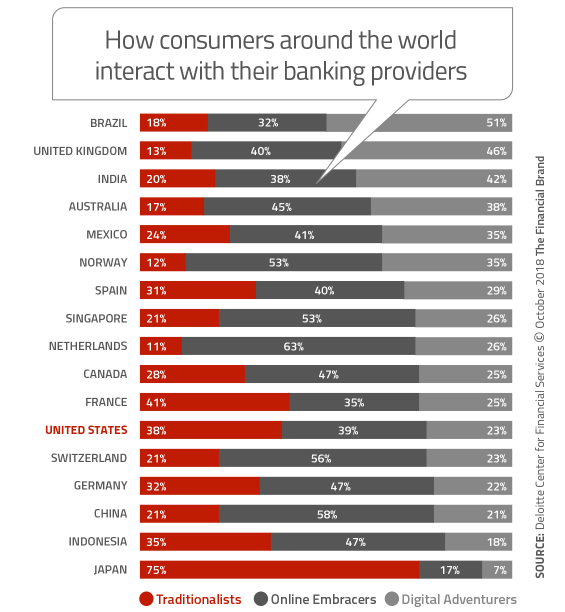 The researchers suggest that cultural differences and embedded branch systems may account for some of the differences. For instance, Japan has more Traditionalists than any other country, with three quarters of consumers preferring branches and ATMs, while only 7% are Digital Adventurers. This is, in large part, because Japan remains a heavily cash society. Go figure.

But generally speaking, among all but one of the 17 countries in the study, more banking transactions are now occurring online and on mobile devices than through traditional brick-and-mortar channels. But analysts noted that volume alone doesn’t tell the whole story.

Many of the respondents prefer to tap traditional, non-digital channels for complex or advisory services. For example, for filing complaints, many more consumers used call centers or branches than either online or mobile channels.

In addition, the report points out that uptake on online loan applications remains low, even though fintechs have been offering this service for years now.

The report notes that digital channel usage is dominated by informational and transactional services, options that have been available to consumers via online banking for over a decade. 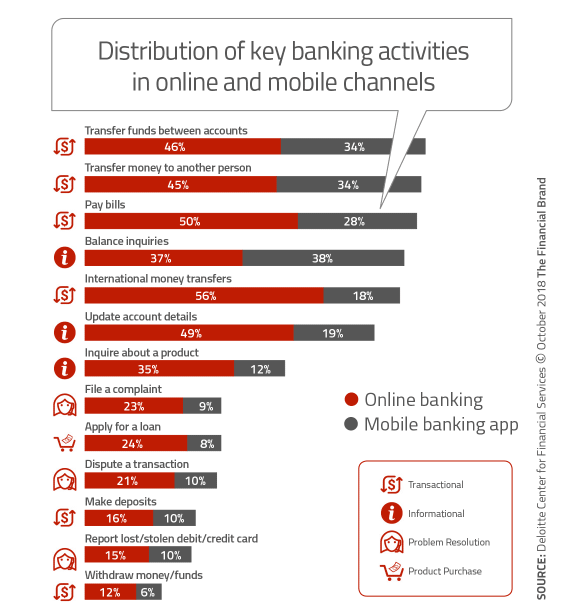 1. For the millionth time already, blow up those silos. Bankers still tend to think “channels,” but consumers think “bank.” Make it all work together. Connect all aspects of the institution — branch, ATMs, online, mobile, and call centers, including digital assistants like Amazon Alexa and Google Home. Not only are consumers fascinated by the potential of true omnichannel service, but seven out of ten consider consistent experiences between channels to be “very” or “extremely” important.

2. Emphasize and improve security. In these times of frequent data breaches and other ID theft, protection looms large as an issue for all three consumer segments in Deloitte’s study. And after an institution beefs up its security, it needs to promote the fact that it’s been adopted.

3. Preach digital convenience to Traditionalists. Many just don’t get digital channels’ point. Financial marketers need to find ways to help them try out these options. One successful effort summarized is the Capital One partnership with OATS — Older Adults Technology Services. Branch staff can become digital evangelists, using tablets and other devices.

4. Make mobile apps friendlier to Online Embracers. This segment tends to regard mobile apps as limited in functionality compared to their computers. Deloitte recommends institutions “focus on making mobile apps more intuitive and more comprehensive” for this cohort.

5. Transform mobile into an experiential channel for Digital Adventurers. Play to your fans, the report suggests. “Digital Adventurers are already avid users of banks’ digital channels,” Deloitte says. “They expect more from their primary banks, which can be seen in the gap in emotional connection between their favorite branches and primary bank. With this segment, banks should use mobile as a differentiator to build sticky experiences.”