Meaghan O'Brien at Launchfire sat down with Dr. Wei Ke, Head of Financial Services at Simon-Kucher & Partners, to discuss innovation in the banking industry, and how financial institutions can successfully drive digital adoption using a combination of technology and empathy.
Subscribe Now!

MEAGHAN O’BRIEN: Dr. Wei, you’ve advised leading financial institutions around the world on product innovation, customer value management and risk management. What are your thoughts on innovation in the banking industry? With fintech upstarts and large tech players challenging the traditional model, are traditional banks innovating quickly enough to keep up with the market?

DR. WEI KE: I want to be a little nuanced. It’s a very interesting phenomenon in the banking industry when it comes to innovation. I do agree with you that the fintech disruptors are putting a lot of pressure on the incumbent players, but there are two perspectives.

One, is from the fintech standpoint. It’s easier to have a fintech company that’s organized as a disrupter, and really, at the end of the day, most of them focus on one thing that they are doing differently compared to the status quo. If you think about a small business lender like OnDeck, the underlying product is still a loan, but the way they engage with clients, the way they sell their product, the way they simplify the communication of their product features, is what they’re innovating on.

And there are many many examples like this where disruptors are actually doing what I call a Core+1 innovation. ‘Core’ is you try to replace a core feature or core functionality, and essentially how you replace it is through the introduction of an innovative feature — so it’s Core+1 in that regard. But for banking providers it’s a collection of innovations that have to come in place, and that’s why it makes it a little bit harder.

That’s the first perspective. The second perspective is banking is a very interesting industry, because it tends to be the case that there’s a bit of a group think mentality. If one bank jumps on board with some kind of so called innovative idea, what tends to happen is then everyone starts to jump on board. But what’s usually not clear is whether they have a deliberate strategy or not.

One example I can give you is remote deposit capture. Now at face value, it seems like a pretty cool feature. But if you really think about it, the whole feature in and of itself is kind of a ridiculous feature. Why bother creating some sort of 21st century technology to hold on to a piece of paper that’s been around since the 17th century? Why not just come up with a fast payment system for P2P payments that essentially takes care of that transaction in the first place?

I’ve said that to the industry at a couple of conferences, that basically we should treat these types of innovations as necessary evil. It’s a necessary evil in the sense that we do have to make that transition from paper checks to digital payments — and you need some sort of technology to smooth that transition over — but it’s not going to last.

MEAGHAN O’BRIEN: What factors do you think are often overlooked when financial institutions plan for digital transformation? 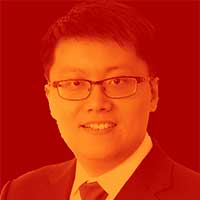 DR. WEI KE:I would say two things. One, is banking providers think they can nudge customers into the digital channel. The original thinking, the digital transformation, was more based on the cost cutting side because serving a customer through a digital channel is cheaper than a conventional channel like a teller. And so the original thinking is purely cost-driven, because banks wanted to cut costs. And they are doing that, but there are two things they are forgetting.

One is how customers actually behave. The digital behavior of a society, of a customer base, is not something you can necessarily steer very effectively as a single player in the whole financial services market. What I mean by that, is people are increasingly getting more comfortable with digital, but it’s driven by how consumer technology has evolved.

If you look at five years ago, the smartphone adoption rates, it was maybe 30% to 40% and these days it’s like 80% to 90%. That makes a tremendous change in how we actually use technology as consumers and whether we’re increasingly more comfortable with digital technology compared to before. And if a bank wants to spend a lot of effort trying to steer customers — with the original objective of minimizing costs — into the digital channel, they’re going to run up against big societal forces of how we actually evolve as a society to become more digital.

Secondly, the other thing banks and credit unions are forgetting is there’s some unique experiences that we can create in the digital channels. That basically means revenue options. You can actually make some money for unique experiences in the digital space and those are features, products, services, that otherwise wouldn’t be available without using the digital media. So that is something that you could potentially monetize to see revenue — and I think most banks and credit unions are forgetting that that’s actually possible.

MEAGHAN O’BRIEN: The2017 EY FinTech Adoption index showed that 84% of Americans are aware of fintech products, but only 33% have adopted them. Why do digital banking products fail to be adopted by users?

DR. WEI KE: Every time you look at a population level study, I think you should always drill down to specific segments. I do think that the younger generations tend to be a bit more comfortable than older generations, and it’s not necessarily because older generations aren’t willing to change, it’s more of a habit forming thing. You already have your accounts somewhere, and there’s no reason to change. Why change?

The younger generation, they’re starting out, if they don’t have a whole lot of money, it’s easier to switch bank accounts to begin with. There’s also a social network where it’s word of mouth. For example, my friends are on Venmo, so yes, I’ll sign up. So there’s that kind of a peer effect when it comes to adopting newer technology.

MEAGHAN O’BRIEN: How can retail banking providers get consumers to embrace digital adoption?

DR. WEI KE: I think what mentally prevents a higher level of digital adoption, other than the big societal forces that I mentioned, is indeed a confidence level — whether I’m confident that I can actually do this properly. And that tends to be what is called a ‘barrier’ for adoption, for digital self-service, by the client. So what banks should be thinking about is actually how to resist those barriers.

To use a very concrete example, people still go to the branch to do large transactions. Why? Because they weren’t confident that they did the transaction properly.

So from an internal organization standpoint, there need to be people in the banks who are not just designing digital features, but actually thinking about the customer engagement perspective and the barriers that customers typically face — and then putting that thinking into the technical design.

The other side, of course, is you need to have organizational functions, sometimes I call it the “educator function” where you can proactively steer customers towards digital — or at least expose them to the possibility of using digital as a way to do that transaction.

And some of the large banks are installing these type of “educators” in the branches. When a customer comes in to do a transaction, they do a bit of triaging to find out what they’re here for, then they would ask the customers whether they would be willing to explore completing that transaction through a digital means.
So you could call it “educators” or “digital ambassadors” or something similar to that concept, but they essentially help the customers to become more comfortable.