Subscribe Now Get The Financial Brand Newsletter for FREE - Sign Up Now
By researching what their customers wanted in an online and mobile banking platform, Ally Bank has delivered a unified experience that is purposeful to users, enhances their product strategy and has obvious competitive advantages, all while living true to the Ally brand.

Banks are not only evolving to bring better mobile experiences to their customers, they’re strategically making design changes across every platform so that their online, phone and tablet experiences remain in synch. This is because 59% of people now own three devices that they regularly use, according to a recent study by Carlisle and Gallagher.

“It was important for us that as people were navigating their Ally Bank experience, they were having a consistency across channels that felt unified,” said Carrie Sumlin, digital deposits executive at Ally Bank. “Usability was a key objective for us.”

Sumlin, along with her entire brand and digital team at Ally, work to understand and prioritize what’s important for the organization about deposits and products, and then bring that to life online or on the mobile app in a way that’s meaningful to customers.

Mapping out the direction of Ally’s online and mobile banking platforms was never a process of adding features simply to check them off of a to-do list. It was a purposeful exercise about designing for the Ally customer. It was influenced by research and tested with the people who would truly embody the persona of their audience.

Today’s customers are more demanding than ever. They want more than just the basics, and expect products to fit their mobile lifestyles. They want apps to be easy to use on the go, not taking an unnecessary amount of time, and bringing value to their lives.

Lucky for Ally, their entire business model is based on that principle. If they build online and mobile banking platforms that are simple, better and beautiful, the customers will come – now to the tune of over 900,000 customers.

Ally is known for not being a typical bank. Not just because it’s a completely online entity with zero physical branches. The Ally brand promotes open communication with customers – being straightforward on rates and terms, without hiding disclaimers or fees from customers.

Rewind to the marketing campaign from 2009, when Ally Bank first launched from GMAC Financial Services, and you’ll quickly understand their brand promise.

“Talk straight. Do right. Be obviously better. As we evaluate and critique designs from our creative teams, that’s a filter we use as we approach everything,” said Sumlin. “It’s been a big part of our brand promise and the experiences that we’ve tried to create.”

Ally’s User Experience Team, a full service, in-house agency made up of user interface designers, usability engineers, copywriters and people from all different needed disciplines, was tasked with creating the experience of its new online banking platform that launched in January 2015.

“From an actual implementation perspective, having that strong and cohesive team really played out well for us,” said Sumlin. “We had the right team that already had experience building out things like the mobile app.” The team did about two months of initial discovery work, focused on how consumer preferences are changing by owning and using multiple devices.

By the end of last year, 75% of people in the U.S. owned smartphones. It’s something we know is quickly becoming universal – people are drawn to mobile phones.

So when Ally’s new online banking platform was introduced, it was launched with a true mobile-first design. Ally’s first generation mobile banking platform was launched in 2012, with an updated app launched in 2014. It’s now available on multiple platforms, including iPhone, Android and Win8 phones and with iPad, Android and Kindle tablet apps – all of which are natively coded.

For the online banking platform, Sumlin and her team leveraged the usability wins that their mobile banking app had already created – hamburger menus (a commonly used three-lined side menu), hidden menus and hidden navigations, all to create an uncluttered experience that brought the most relevant information to prominence. 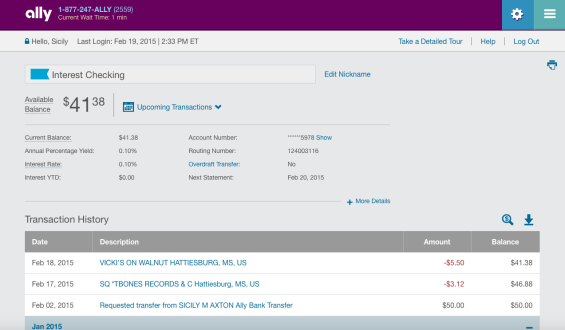 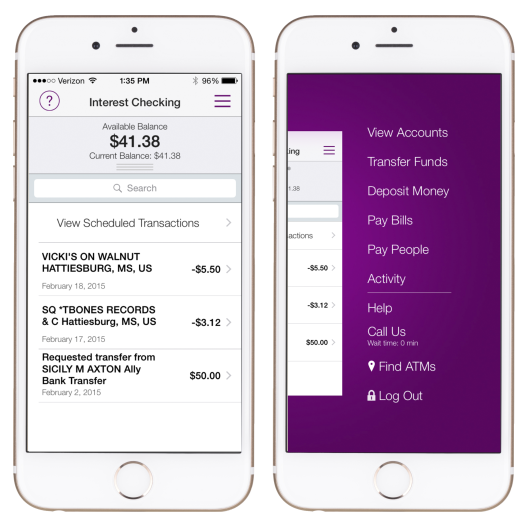 The common trait? An uncluttered experience, where relevant information is prominent and functionality is simply enhanced by design. Because it wasn’t always an exercise in adding new features, but instead, making existing features easier to use and more consistent across online, the tablet and the mobile phone. For example, P2P payments gained a higher prominence on navigation. 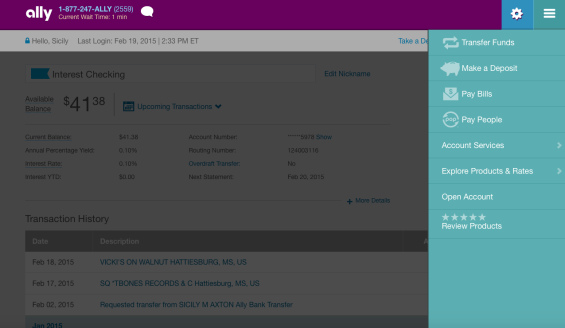 Plus, customers see a different dashboard or landing experience based on the number of accounts they have. If a customer only has one service, they go straight to the details of that account without needing an extra click. If the customer owns more than one, their dashboard view is more robust and lets them easily move between accounts. 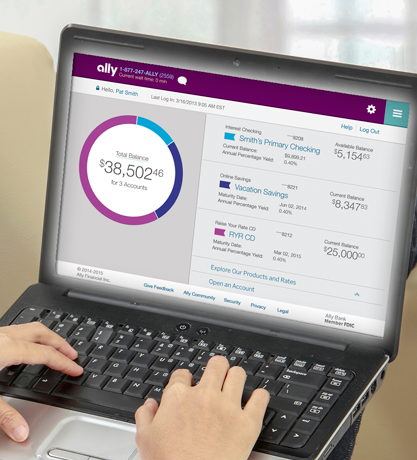 Ally has also simplified their login experience by taking it from a two-step process to a one-step process. They’ve removed the ‘trusted image,’ (the picture that users once had to select at login when also entering their username and password). To replace this step, they’ve deployed security technology that runs in the background and involves sending the customer a security code to verify their device. It’s not less secure; it’s simply evolved to be even easier for customers to log in.

The new account details page also includes a widget of upcoming scheduled transactions as well as a transaction level search that allows customers to use keywords and date ranges to quickly find transactions.

And to better understand the new features, customers are first prompted to take an online banking tour. 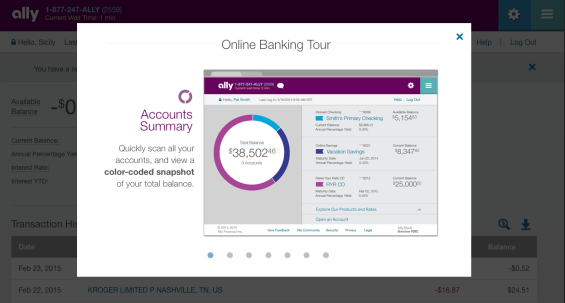 More views of the new design enhancements on the ally.com storefront trailer.

The percentage of Ally customers using online banking is at 60%, while 40% of total digital logins are happening through the mobile app.

Putting It To The Consumer Test

So how do you know if people will like what you’re creating? That’s where consumer level testing plays a huge role in Ally’s strategy.

“We developed the design in phases,” said Sumlin. “As we completed each phase, we actually did extensive usability testing in our in-house lab, where we brought both prospective customers and actual customers to our lab to review the design and make sure they were resonating, both from a branding and a usability perspective.”

The customers were given tasks to complete from a working prototype of the online banking platform. They were asked to, for example, complete a transfer, view a statement or change their email address in order for the team to evaluate whether those common and important tasks could be easily achieved with the new design.

At the end of the session, the Ally team would ask general questions, such as, “Is there anything you would change? Do you have any other ideas or suggestions? Do you like this portion of the site?” And existing customers were asked: “Do you feel like this process is better, the same or neutral from what we have today?”

The feedback was handed off to the tech team, who continued to develop and deliver their code in different phases. “What we call it internally is an ‘iterative waterfall,’ where we’re going through phases multiple times in rapid succession,” said Sumlin.

As the team was going through these design phases, they also tested them with personified user segments that were defined by the types of people that were expected to use the site. These generic characterizations of people were based on things like the types of accounts they would have and types of transactions they would do.

“As we were going through design phases and reviewing designs, we would say them by name,” said Sumlin. “Would Hal be able to use this and be able to understand this? Would Sheila? Would Alex? We wanted to make sure we were covering all of those dynamics.”

Understanding the persona of the Ally customer is not only beneficial to its online and mobile banking … it gives Ally the opportunity to further leverage its entire product strategy in a way that competitors can’t match. Because, despite some similarities in design and functionality of other financial sites like Mint and Simple, Sumlin says Ally’s differentiator is its focus on products … particularly those designed to appeal to savers.

Ally saw the opportunity at hand to reach the ‘super savers,’ their key customer segment of people who are particularly interested in using CDs to achieve their financial goals. That’s why the team made it a mission to educate these super savers about a powerful investing technique called CD laddering, which allows investors to get the advantages of both long and short term CDs.

Ally created step-by-step instructions and graphics to help a user discover this tool and understand how to use it. 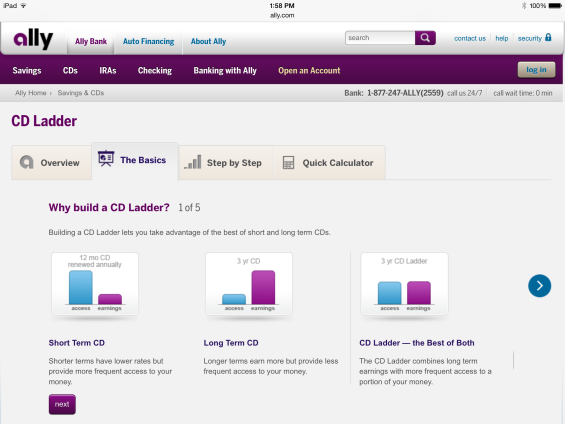 It’s a one-stop shop for the user thanks to the content provided, but also because that user wouldn’t see any other bank in search results without some digging. If you Google ‘CD laddering,’ for example, Ally’s landing page shows up first, with no other banks appearing on the first page. 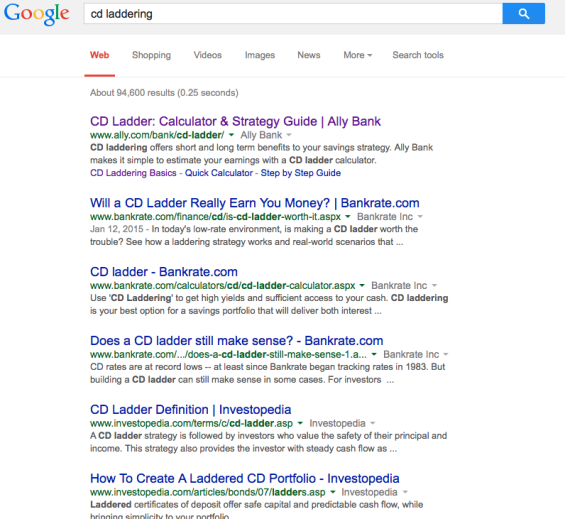 While some other banks talk about CD laddering, few have taken the care to explain it or give it the design attention it deserves the way Ally has.

The team also knew that the new platform should do a better job of supporting its key products. The Raise Your Rate CD, Ally’s greatest competitive advantage and the centerpiece of its product strategy, gives customers the option to raise their rate during their term if rates on CDs go up.

Customers with this CD can use online banking to view their actual balance, but also their interest that has accrued and is projected to accrue, as well as interest payout projections, alerts about maturities and opportunities to raise their rate if it goes up. 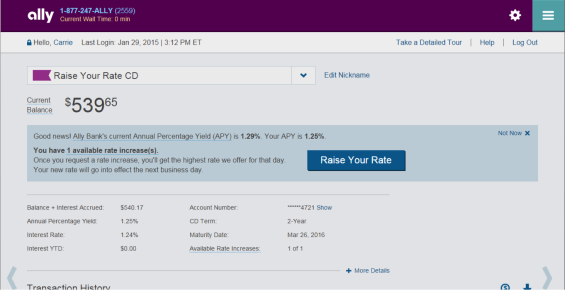 They also tuned their product views for multiple devices to support this key product, allowing customers to see their account details on the app. 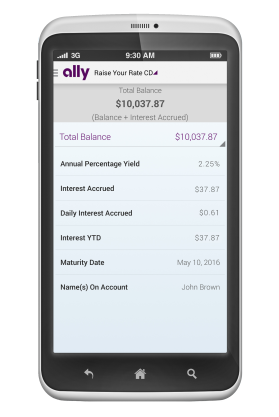 By leveraging this product strategy, Ally is positioning itself as a clear leader in giving savers the information they’re wired to want to know about.

Because Sumlin and the Ally team put their customers at the center of their process to create the new online banking experience, they took a constructive direction in the continuous evolution of banking.

“For customers to get to use these new features and have this upgraded experience is right in line with the types of services we want to be offering people digitally, and we feel that it aligns with our product strategy as well as our brand strategy,” said Sumlin. “It’s a huge accomplishment for Ally.”