Design consultancy Continuum says their branch and service model for BBVA will help transform the way consumers do their banking.

If you’ve been in the financial industry for any length of time, you’ve probably noticed that just about every major global bank has some sort of ‘bank of the future’ or customer-centric branch concept that they’re working on, testing, piloting or deploying.

The trouble is, according to Lee Moreau, a principal at design consultancy Continuum, most of those efforts “haven’t gone anywhere.” So he and his colleagues at decided to take a different tactic when tasked with developing a new a branch and service model for multinational Spanish banking group BBVA.

“We took a step back, looked at the situation and then decided that you really don’t need a ‘flagship branch’ to serve as some centerpiece of your service model,” Moreau explains.

Continuum began work for BBVA in 2009 when the design firm took a thorough look at the bank’s entire retail banking platform. “We wanted to figure out — or at least understand as fully as possible — why the branch was still a relevant consideration,” Moreau continues, “because no one on our project team had been to a bank branch recently and, frankly, we couldn’t believe we were being asked to look into this at first.”

Moreau discovered that historically the branch had served as “the place where all of a bank’s channels, all of its promises, came together.”

“In 5 to 10 years your digital and remote channels will be so sophisticated and appealing that, frankly, consumers will find coming into your branches to be an inconvenience.”
— Lee Moreau, Continuum

“That’s the model we had to work with,” he says. “So we decided to turn it on its head in order to help the banks see the world, with the consumer at the center, surrounded by a bunch of both physical and digital touch points that are equally accessible at any point in the process.”

In the end, Continuum focused on developing a local retail branch model that could be used “as a transitional tool for the future.” After all, Moreau explains, “the days of building branches that basically serve as billboards for your bank’s brand… well, maybe they’re not over yet, but they’ll be over soon. In our minds, the goal should be to become sophisticated enough that you don’t have to have a staffed branch on every street corner as a brand play, because you’ll be communicating your value through other channels as well or instead.” 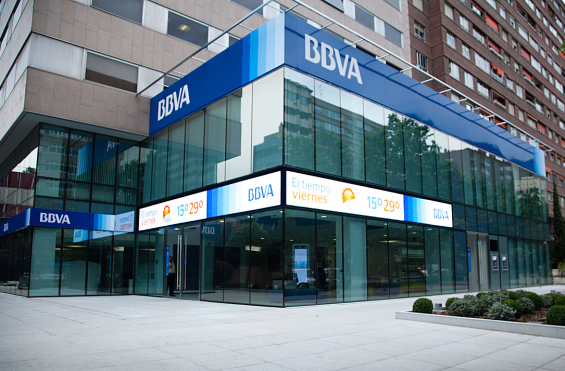 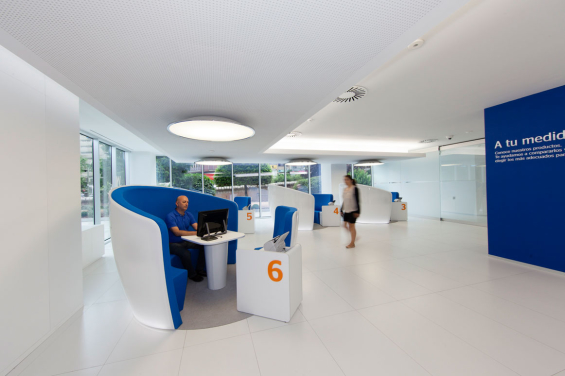 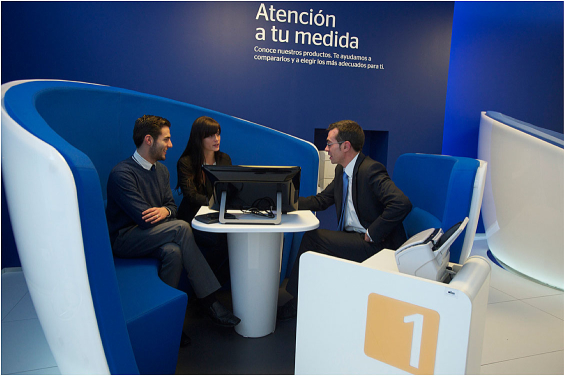 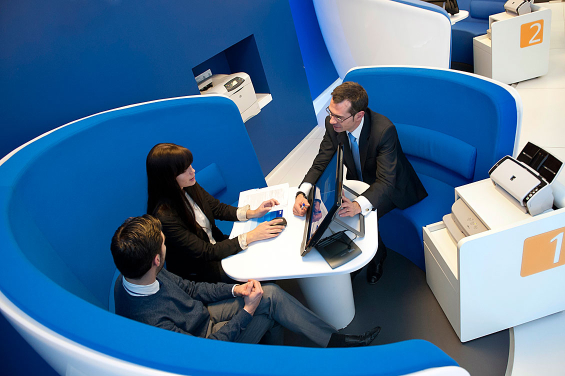 See More: Branch Showcase of 12 Concept Designs From Around The World

BBVA is working to combine virtual experiences with hands-on relationships both on line and within its current and future branches in a number of different ways:

Pods – Probably the most obvious of the physical or architectural changes that are being made to BBVA’s service model are the pods — or “cocoons,” as Moreau calls them — that can be found in its pilot “EasyBank” branch in Madrid and are used to provide “a private, accessible space for financial advice” in which the customer and advisor sit side-by-side, view the same computer screen and access the same information. They’re also intended to “help ease the transition of consumers out of the branch and into digital and remote channels,” Moreau explains.
https://www.centrodeinnovacionbbva.com/en/videos/13985-customer-centric-bank-a-different-way-of-understanding-the-relationship-with-the-client

The “Collaborative Front” – Moreau describes this as an in-branch portal that’s essentially an assisted version of online banking. “This lets the customer drive [the experience] in branch, become confident with it and then migrate to even more convenient channels, like doing it at home or on their mobile phone,” Moreau explains.

LOLA – BBVA’s intelligent virtual personal assistant designed in partnership with SRI International, the research and innovation center that had a hand in creating Apple’s Siri technology, that “understands, advises, recommends and operates on behalf of customers with the same assistance that an actual employee would facilitate.”

“It’s about creating these kinds of customer-owned experiences, driven by a similarly customer-centric user interface,” Moreau adds. “So in the end you’ve got a new digital platform and a new physical platform, but you’ve also got new ATMs and other related elements that help streamline customer transactions as well as allow for more and different and new types of customer interactions to take place.”

Trying to integrate all of these new digital channels with old legacy ones ends up being a huge challenge,” Moreau said.