Former Citibank fintech and marketing expert Linda Duncombe was brought in to get the 'bank to the stars' back on track digitally. Part of the turnaround hinged on use of 'co-creation.'

Digital technology has remade the financial marketing function in multiple ways, from the types of services banking institutions need to develop and often partner on to the techniques used to reach out to customers. At City National Bank Linda Duncombe balances both sides of the equation.

Duncombe carries multiple titles at the bank. She is EVP and Chief Marketing, Digital and Product Officer. When she arrived one of her first challenges was putting City National back into the digital game, starting with its mobile banking app.

“The digital space had gotten a bit away from us,” says Duncombe. City National is an entrepreneurs’ bank with heavy involvement in the entertainment business, including serving entertainers and their business managers. Duncombe was brought aboard for a fresh perspective, to look at digital in all its forms.

She brings an unusual combination of experience to the job, which she took in 2019. Duncombe spent time in the front lines back in her native Australia, learning the banking business at the customer level. Then she segued to marketing and technology, spending nearly six years in these areas at Citi Australia and seven more in fintech and consumer banking at Citi in the U.S.

The first urgency at City National, owned by Royal Bank of Canada, was mobile banking.

“When I came here we had a white-label product that was very counterintuitive to our client base,” says Duncombe. Her assignment was to get a better product on the street as quickly as possible.

One of the drawbacks in product design for financial institutions is the need to avoid thinking like a banker. In working to take City National’s offering beyond a generic app, Duncombe tapped a process she believes in strongly: “co-creation.”

This outwardly resembles focus groups, in that it involves working with groups of customers or prospective customers, but it is more than that. Traditional focus groups put many questions to people to probe preferences and attitudes, but then design remains the banker’s responsibility, according to Duncombe.

Co-creation resembles co-authorship, though staff remains in charge of the ultimate product. Duncombe explains that along the way the customer group the mobile team was working with saw ideas go from PowerPoints to “wireframes” (skeletal, nonworking representations of potential screens and features). 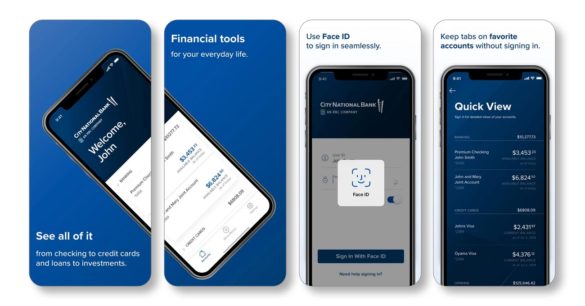 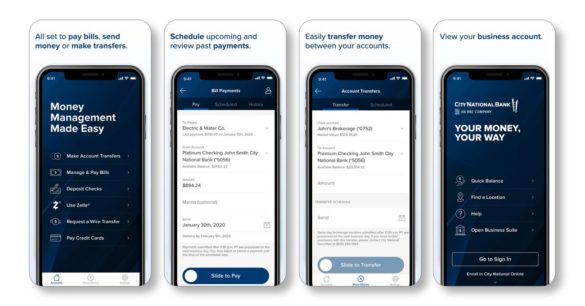 The co-creation process serves multiple purposes, a key one being prioritization. “You may have 150 features you want to include, but if you try to put it all in at the beginning, you’ll never go to market,” says Duncombe.

Bypassing the customer input is at the team’s own risk, according to Duncombe. She gives this example. Mobile capture represented a must-have, which was reconfirmed as the new mobile product debuted in the midst of the initial Covid wave in June 2020. (The bank’s website was revamped in the first half of 2021.)

“We built the flow for check deposit and we thought it was amazing. We were proud of it,” says Duncombe.

The customer group, however, hated the flow and said so. “We just had to talk them into it,” Duncombe admits.

Duncombe says pushing the consumer panel to accept the original approach broke one of her principles of co-creation — and soon it became clear that the customers had been right. “So we pivoted in mid-air and changed the flow based on their feedback,” says Duncombe.

Building Mobile Further for the Future

Duncombe says she’s proud of the new mobile app but sees it as a beginning only. “We have a lot of work to do.” The new app’s rating is higher than the old app’s, on Google Play and Apple’s App Store, but there’s room for improvement yet.

Co-creation, on a continuing basis, is critical, and for a reason that, at first, seems counterintuitive: A bank can get too far ahead of its customers in technology.

“I’m a client of an Australian bank that is very progressive in mobile, and they grew so good at agile development that they were pushing out far ahead of what clients needed.”

A point Duncombe frequently makes is that consumers rarely compare their mobile banking apps to other mobile banking apps. They have all sorts of apps on their devices and all get lumped together in terms of functionality. She says it’s not unusual for co-creation group consumers to hold up a nonfinancial app and say, “Why can’t your app do this, this way?”

Something that Duncombe keeps in mind is that if banking institutions fail to improve, others will step in.

“Think of why PayPal and Venmo have done so well,” says Duncombe by way of illustration. “It’s because many banks in the U.S. and elsewhere were not doing so great in the payments space. On the other hand, if you look at Australia, why is there no Venmo there? Because banks did very well with payments there, they didn’t take their eye off the ball. I’ve been able to move money with my mobile phone number from my app from Australia for over ten years.”

Digital development at City National is not in-house only. Partnerships with fintechs are used when this makes sense. One example is a virtual Visa commercial card. One use is to issue virtual cards to people working on movie sets who for that gig need to be able to charge things to the production company. The card has a unique card number, a unique security code, and an expiration date, and draws on an established credit line. The cards are issued in partnership with the fintech Extend Enterprises, Inc.

Duncombe explains that the bank didn’t set out to get into the virtual card business, but to fill a gap that customers in the film business told them about. Absent a card, studios have to issue reimbursement checks and the recipients have to get to a bank to cash them.

“We have seen incredible uptake,” says Duncombe. “The volume we expected to see in the first four years, we saw in less than 12 months.”

When Is Outreach Going Too Far?

One of the good things about digital channels is how closely a financial institution can monitor usage (or lack thereof) and then reach out to customers to suggest alternatives or ideas.

And one of the bad things, when overdone, about digital channels is how closely a financial institution can monitor usage and then reach out.

Explaining this apparent paradox, Duncombe says during the height of Covid the bank was monitoring usage of Zelle and reaching out by email to people who weren’t using it, or only infrequently. The messages offered a link to a tutorial.

That helped a lot of customers, but Duncombe says the power of technology to do that sort of thing must be used carefully.

“As a bank, we prefer to go under the limit than over it, in terms of outreach,” especially when it is tailored. While the bank reached out to promote Zelle during the pandemic, controls, policies and permissions govern all outreach. 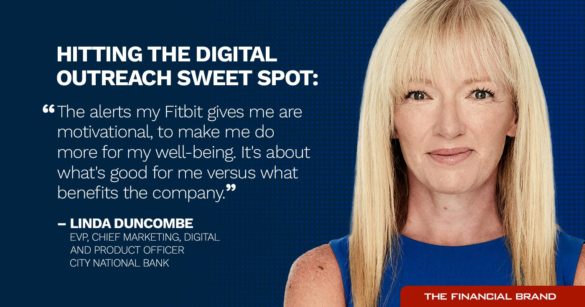 “You have to be careful when you are pushing information to people’s personal devices,” says Duncombe. “It’s a personal device, right? It’s your virtual world, very specific to you. And when you start getting alerts that you don’t believe are of value to you, you switch them off. Then the company loses connectivity with that particular individual.” Duncombe points out that reinstating alerts takes more time than killing alerts.

Duncombe loves her Fitbit and uses her experience with it as a touchstone.

“The alerts my Fitbit gives me are motivational, to make me do more for my well-being. It’s about what’s good for me versus what benefits the company,” she explains.

So decisions to reach out get handled very carefully, whatever the channel. An example of something that would likely be quashed would be a message about new deposit rates. Duncombe says the bank’s website would probably be used for this kind of message instead.

“We absolutely have to protect our clients identity, their data and their money,” says Duncombe. “If you can’t do that, you shouldn’t be in banking.”