Subscribe Now Get The Financial Brand Newsletter for FREE - Sign Up Now
America isn't done with branches by a long shot, new statistics suggest. When even ecommerce giant Amazon is considering more physical locations, it seems that physicality still counts.

Despite the popular narrative that branches will soon go away as digital banking plays a more dominant role in consumer’s lives, a combination of new branching and closures continue to produce only a slow erosion among banks and credit unions.

Everyone has their opinions, but facts in the form of branch statistics are irrefutable.

In the last ten years total branches declined by 10.4%, or about 1% annually, and now sit at just over 100,000 branches nationwide. Bank branches make up nearly 80% of the total and declined faster than credit unions at a ten-year rate of 11.5%, while credit unions saw only a 6.3% decline in branch counts.

Since the release of the mid-year 2020 FDIC Share of Deposits database, banks witnessed a slightly higher annual rate of net closures of 1.7%, according to filings analyzed since then. Credit unions shrunk at a slightly increased rate too.

The bottom line is that net closures are up only slightly. Far from the dramatic predictions of branches becoming extinct. 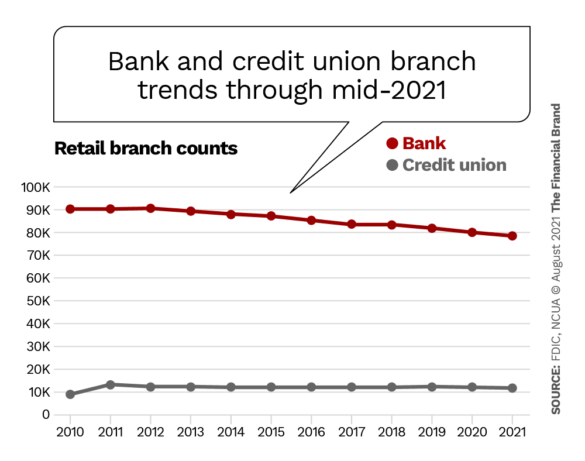 Even During the Pandemic, Financial Institutions Have Continued Branching Efforts

Looking at new bank branches over the last 30 months helps paint a picture of why so little has changed. In the months leading up to the Covid shutdown, banks were opening an average of 99 branches monthly. During the Covid19 period in all of its combinations, that number has been off, but only slightly, at an average of 94 per month.

What’s behind this? It’s not complicated. Multiple studies indicate that consumers of all ages still want branches. They just aren’t going to visit them as often as they used to because the industry took away the need to do so by offering other ways to get information, obtain cash and make deposits. Bank of America has noted that 85% of all deposits are now made at ATMs or through digital channels. 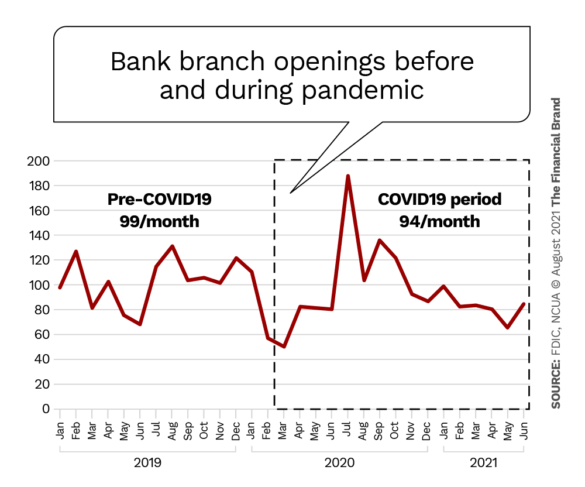 If I don’t need to see a teller to make a deposit, then I won’t, and you know that means that branch foot traffic has to go down. But it doesn’t render the branch unnecessary.

Chase Leads the Trend, but It’s Not Alone

During the Covid period, over 700 banks opened over 1,500 branches, so it doesn’t seem like new branch building is isolated to just the big banks, although Chase did open 254 new branches, or one in six of them, during this period.

Here is a look at the top ten new branch builders:

It’s not like new branch building is only occurring in high-growth markets either. During this Covid period, new branches were built in 340 metro areas. In fact, 96 branches, or 6.3% of the total, were built outside of metro areas in rural markets.

New York is noted for being heavily branched already, yet 58 new branches opened there during this Covid period. That’s a tie with the much different Houston-area market.

Looking at the Trends and Their Implications for the Future

Covid slowed down new branch building, but only slightly. It increased the pace of branch closures but didn’t deliver the death blow to branches that many experts predicted. Given the major changes Covid has wreaked on other elements of the economy, this says something for the resilience of branches.

More than 13% of all banks opened new branches during Covid, showing a strong sense that CEOs still see value in branches. And new branches were built in over 300 markets, so these initiatives are not isolated to any one part of the country either.

The latest FDIC data comes out in September, and at that point I’ll take a look at new branches’ deposit growth. I speculate it will be better than in previous years as stimulus monies have made it into people’s wallets. From 2019 to 2020 FDIC Share of Deposit reports indicated that branch balances grew at twice the historic rates. Expect more of the same.

So we continue to have a blend in retail banking channels. Digital must work with branches, as they won’t replace them fully any time soon.