Subscribe Now Get The Financial Brand's FREE Email Newsletter
The future of retail financial services is going to be less about banks and credit unions and more about a broad array of providers. Many consumers 'bank' with new players by preference. So why do people still speak as if banks are the only game on the block?

Increasingly it looks like the rhetoric of financial inclusion needs a recalibration. Failure to do so could drive erroneous business decisions and public policy.

Commentary from regulators, members of Congress, fintech players and banking executives have for a couple of decades talked about first the “unbanked” and later the “underbanked,” people that traditional institutions weren’t always reaching.

Some institutions have worked to devise special products and services to meet the needs of people they haven’t served before and some neobanks and fintechs have made these groups their focal point. The concepts of unbanked and underbanked are very much in the mix of continuing evolution of the Community Reinvestment Act and related regulations.

“In the future, everyone will be underbanked.”

Why Banking Is Less About Banks Now

“The terms ‘unbanked’ and ‘underbanked’ are becoming antiquated as consumers’ adoption of nonbank financial services continues to grow and fintechs continue to innovate. If banks and credit unions want to remain essential to consumers’ financial lives, they must rethink what it means to be underbanked and come up with new strategies to address gaps between their services and customers’ needs.”

Official numbers out of FDIC and Federal Reserve studies have held that the proportion of the U.S. population that is unbanked and underbanked has been relatively steady in recent years. But Principato argues that being “banked” is becoming something of a non sequitur.

The analyst has been digging into this area for about a year. What motivated her, she says in an interview with The Financial Brand, is her view that “the future of consumer financial services is going to be less bank-centric than it is now.”

“Consumers can manage more of their financial lives without the help of a bank than ever before, which means the term ‘underbanked’ is rapidly becoming outmoded.”

Not so long ago, Principato says, “underbanked” implied that people with bank relationships were going to nonbanks for services that they could, in theory, obtain from their banks.

Today, she believes, many of the underbanked are not “underserved but serving themselves.”

From the perspectives of regulators and others, Principato believes that many “underbanked” and “unbanked” people have specifically chosen to have a financial relationship with a nonbank. Both government officials and industry leaders need to recognize the change, she says.

There’s a strong portion of consumers who have made a choice. “They are on the cutting edge of accessing what’s available to them today, and they are cobbling together all the different ways they can access financial services now,” says Principato. Research by Galileo and others has indicated that a fair number of consumers like to “mix and match” the offerings of multiple providers to bring together their personal blend of financial services.

A Deeper Look at Unbanked and Underbanked Americans

In her report Principato used the company’s own survey data to evaluate unbanked and underbanked segments. The relevant categories were defined as follows:

Getting a Fix on Bank Usage:

About 16% of Americans are underbanked and 8% are unbanked, according to Morning Consult's definition of the terms.

Principato says the research suggests that conceptions of both groups may not be correct.

“The long-held assumption in the financial services industry is that consumers wouldn’t choose to use services qualifying them as underbanked — cashing checks, purchasing money orders or paying bills through nonbank providers — if they had a banking relationship that provided such services,” Principato writes. She adds that many believe such services prey on lower-income people.

However, as reflected in the chart below, “the demographic makeup of fully banked adults compared with underbanked adults doesn’t support this theory,” writes the analyst. 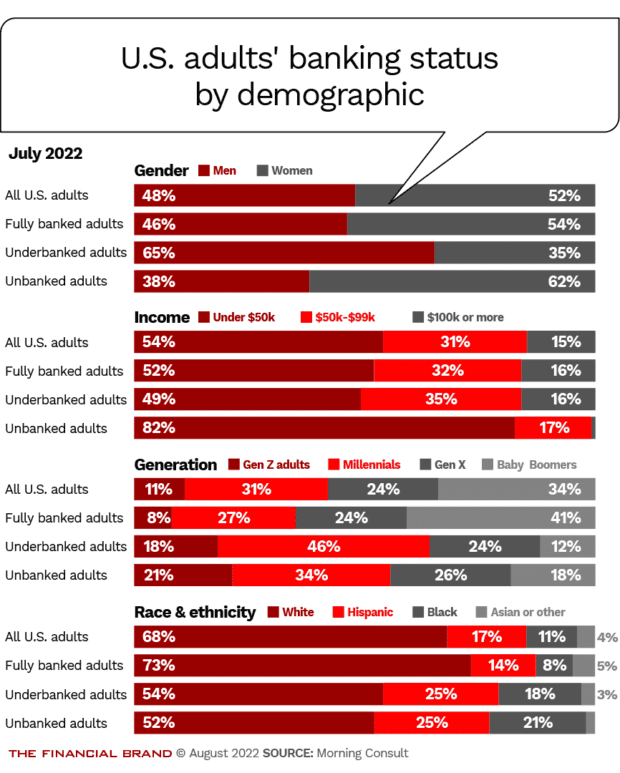 “Across income brackets, underbanked adults are choosing to go outside of their banking relationships to access their money and move it when and how they need.”

“Beyond the alternative financial services that define them as underbanked,” Principato continues, “these adults are more likely to use digital wallets than the general population (89% compared with 64%), to have made a purchase using ‘buy now, pay later’ in the past year (54% compared with 26%), and to report that they or someone in their household owns cryptocurrency (45% compared with 19%).”

Principato says these people are not underbanked — in the sense that they have services available that they want to use. They are making use of today’s substantially broadened range of financial options. The more alternative products that are included, the more people would fit the “underbanked” category, which of course isn’t what’s implied by the term.

What Are the Implications of Banking as a Service?

A complicating factor that Principato is analyzing: the role played by banking as a service, embedded finance and similar arrangements. In other words, when using a fintech service, there is often a bank in the background.

“From the consumer perspective, they’re not interacting with a bank,” says Principato in the interview.

For example, Chime, which many consider the leading consumer neobank, is estimated to have 13 million active customers. That leaves many traditional banks in the dust. On the other hand, since underlying insured deposit relationships reside at chartered banks, could a Chime-only customer be considered “unbanked”?

Regarding “underbanked,” Principato argues that the growing role of BaaS supports her viewpoint.

“We should remove the term ‘underbanked’ from the lexicon of banking professionals and just break down what the individual consumer’s need for financial services is,” she says. “We have to look at the front end. What does it say about consumers that they are not walking into a branch to do this activity, but instead pulling out their phone and going to a fintech app?”

Ultimately, the banking industry must take a more nuanced view of how people are now managing their finances, says Principato, in order to best serve them. The alternative may be to lose them.