Coronavirus impacts on the U.S. economy deepen and more and more citizens will be suffering financial anxiety. A concern is that where banks and credit unions are reaching out with messages of potential relief for consumers, they are failing to connect.

The impact of the coronavirus pandemic on the U.S. economy is all over the nation’s front pages, but nothing registers quite like news directly from the home front. Fresh findings about the impact on the individual from an ongoing consumer poll by J.D. Power indicate that the pain of shuttered businesses, layoffs, furloughs and pay cuts has not yet hit its own peak, even as the nation awaits the peak of the virus at the local, state and national level.

J.D. Power has been performing its poll since late February. In the latest, taken between April 3-5, the firm asked how the COVID-19 crisis has affected respondents’ personal financial situation. Nationally, they answered:

This is the state of things one week into another full month of social distancing, voluntary isolation, and schooling and working from home. The journey to April 30 will be a rough one. The research found that 55% of those surveyed report being somewhat stressed over their overall financial situation — and 27% say they are very stressed.

In terms of employment, respondents told J.D. Power this:

In an earlier edition of the research, in mid-March, 44% of those responding said they have to go into work to get paid. While some shuttered companies have kept people on the payroll, how long that lasts even with federal assistance is iffy at best.

In terms of the outlook, these Americans are veering to the pessimistic. While 55% of the sample expect the unemployment rate to return to pre-coronavirus crisis levels within a year, 37% expect the employment slump to continue beyond that, with 14% predicting that it will last three years or more.

While many scoffed at the illness in its early days here — the TV interviews with arrogant spring breakers complaining that beaches and bars were closing up in Florida are still fresh in mind — 71% of Americans now consider the pandemic to be extremely serious.

The COVID-19 pandemic’s economic impact has hit two out of three Americans ‘ pay. While 33% have not seen a change, and 2% have seen an increase — perhaps they are scalping toilet paper — of the rest, their paycheck has:

Reality Check: A point that is troubling for financial institution marketers is that an increasingly anxious public may not be hearing its messages.

More about this later in this article, but here are some figures on communications from primary financial institutions about coronavirus issues of all kinds:

Further, while 32% of respondents said they felt their primary financial institution had shown concern for their personal financial situation, 35% said it had not. Another 32% didn’t know.

For only a third of consumers to think financial institutions care is “a huge emotional disconnect,” according to Bob Neuhaus, Vice-President of Financial Services Intelligence for J.D. Power. He says institutions need to start getting more specific about how they can help and what consumers should be doing. As the following will show, the hunger for help is going to grow.

Where and How Badly Economic Impact is Hitting

Looking at the two major economic status measures in the poll — personal financial situation and family income — by region and by other groupings highlights trends of concern. 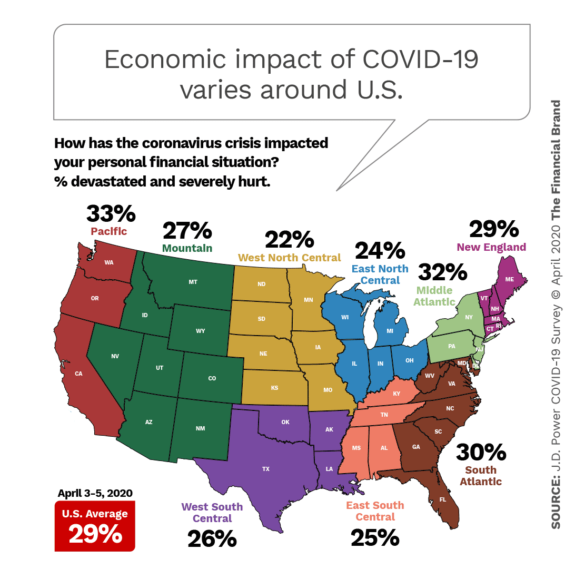 In terms of personal financial status, the middle of the country, as demonstrated by the map above, has been hit somewhat more lightly than the Pacific and Eastern coastal regions.

Remember the Day After Tomorrow. In relief efforts now and in later credit decision making as the economy comes back, banks and credit unions will need to be careful that well-intentioned efforts don’t backfire and trigger “disparate impact” lawsuits by private groups or federal agencies such as the Justice Department and the Consumer Financial Protection Bureau.

In terms of the impact on family income, looking at the trend regionally for those who saw a decline of 50% or more, the Mountain region has actually felt the least pain so far and the Pacific Coast the most. 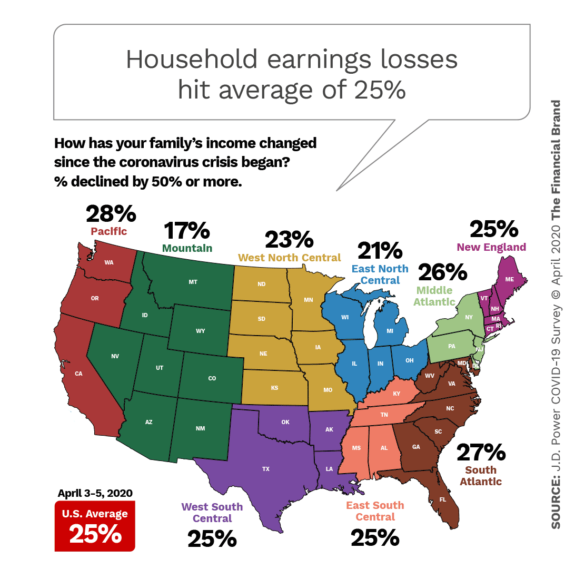 By age, 30-44 year-olds have felt the biggest effects on income, with 29% saying they have seen declines of 50% or more. Again, people over 60 have seen the least effect, only 12% reporting such declines.

Falling Back on Personal, Private or Federal Resources

At this writing in early April federal stimulus checks issued under the CARES Act had not yet been received, with The Washington Post quoting an Internal Revenue Service internal memo indicating that Americans could begin receiving the one-time checks as early as April 9. Other sources indicate later dates.

Prior to passage and signing of the act, consumers were asked how they would pay for living expenses if they couldn’t work for a month. At that point, in mid March, when things perhaps seemed a bit less grim, over four out of ten Americans expected to get by tapping their savings. Comparatively few people expected to borrow or rely on credit cards. 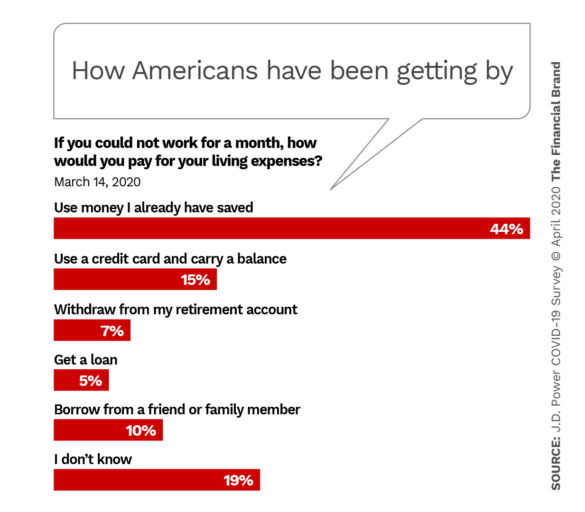 As noted, this came before the stimulus package’s passage.

In the April 3-5 research, people were asked if they were financially prepared to deal with the COVID-19 crisis. Their answers are below, There was almost no change from the previous survey on March 15 survey.

By contrast, concern about the impact of the crisis on personal financial status has ramped up considerably since the firm began its polls. The April 3-5 numbers appear below, with the late February numbers in parentheses:

Nearly one in three expect the hurt to last six months to a year and one in four for three to five months.

In the April 3-5 research, the company asked how people felt the Act would benefit them. 58% saw no benefit or only minor benefit resulting from the aid package. 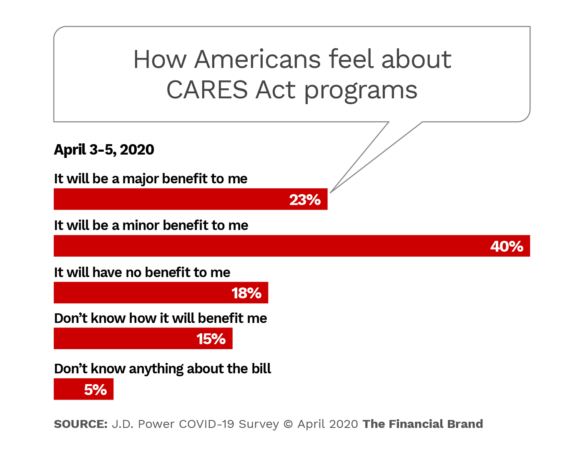 Note that on those dates reports were hitting the media of trouble with the Paycheck Protection Program created by the Act and that stimulus checks had not been received. Good news in both areas could affect opinion later on.

In the face of all these developments, what is the industry doing? The Financial Brand has reported on efforts announced by banks and credit unions large, medium and small, and other efforts have been seen. Going by appearances on websites, news releases received and social media observed, it would seem like flocks of institutions are offering some kind of credit help.

But either the overall industry effort is still small or a communications gap exists. In the April 3-5 research, a whopping 67% of the sample said their primary financial institution has not announced any of the relief measures commonly adopted.

The incidence of announcements seen is incredibly small:

The CARES Act includes accommodations for institutions to make it easier to grant relief, such as postponement of accounting standards and easing of debt classification standards. Federal regulators have been issuing guidance along these lines both before and after passage of the Act. It may be too early for consumer data to reflect changes being made. 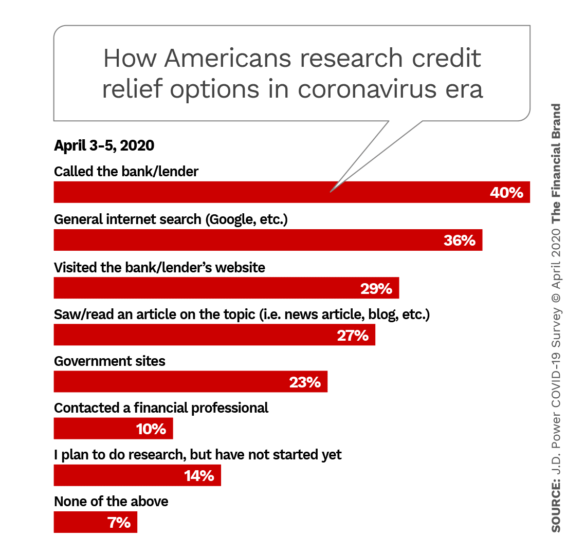 While one in three people go to their institution’s website to find information about relief availability, financial marketers need to consider what consumers will find there. As The Financial Brand has pursued marketing stories in the COVID-19 period, we’ve found a strong minority of sites don’t make it easy to find coronavirus-related information. Some home pages give absolutely no clue that anything out of the ordinary is going on.

Other financial sites have been quite explicit and complete. Examples can be referenced in this article.

“I’m not sure that the banks’ messages are getting through effectively to consumers,” says J.D. Powers’ Neuhaus. “The banks have a long way to go.”

What types of loans do Americans likely need to defer? The respondents ranked them this way:

As high as that top-ranked number for credit cards is, Neuhaus thinks this is just a beginning.

“It’s hard to say how much,” Neuhaus predicts, “but that will look worse in a month.”