Subscribe Now Get The Financial Brand Newsletter for FREE - Sign Up Now
Despite a decade of promotion and hype about mobile wallets, the dirty truth is that most American consumers don’t see any reason to adopt them. Nevertheless, as a perfect storm of drivers could tip the scale towards adoption in the next few years, banks and credit unions should be prepared for when it comes.

When Pew surveyed 1,200 American adults in 2018 it found most were still hesitant to adopt mobile payments. Many remained skeptical of the technology, had concerns about security, and were more likely to trust traditional payment methods like credit and debit cards.

Since then, the 2019 announcement and launch of the Apple Card led to a rush of glowing predictions for mobile wallet usage. The Apple Card, most agree, has been a success so far, but has it really moved the needle for wallets overall?

Some analysts continue to believe growth in mobile wallet usage will be slow for all but dedicated digital enthusiasts.

“Consumer attitudes towards payments change glacially,” Peter Reville, Director of Primary Research Services at Mercator Advisory Group, told The Financial Brand. The analyst says adoption of mobile wallets has never lived up to expectations, including his own, early on. “I can’t tell you how many times people have said ‘Next year,’ about wallets.” A mobile wallet user and fan himself, Reville says he has given up trying to predict when usage will “cross the Rubicon,” although he continues to believe it will.

Even payments industry insiders have doubts about when mobile payments will finally take off. Will Graylin, a former Samsung Pay executive, told CNBC that merchants need to hit a certain threshold of adoption to get consumers to change habits. And with a perfectly-functioning card payment system in place, consumers still have little incentive to move to mobile wallets. 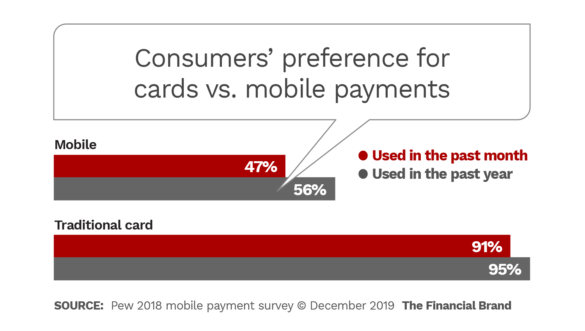 “The reality is we’re not there yet…There is simply not enough ubiquitous acceptance,” Graylin said.

What’s the Benefit Over Using a Card?

To be fair, there has been some growth in mobile payments in the past year.

A report by Mercator Advisory Group found the percentage of consumers using any kind of mobile payment increased from 48% in 2018 to 60% in 2019. There’s been moderate growth in built-in payments like Airbnb and Uber, and Apple Pay recently surpassed Starbucks’ mobile wallet with more than 30 million users, eMarketer found. 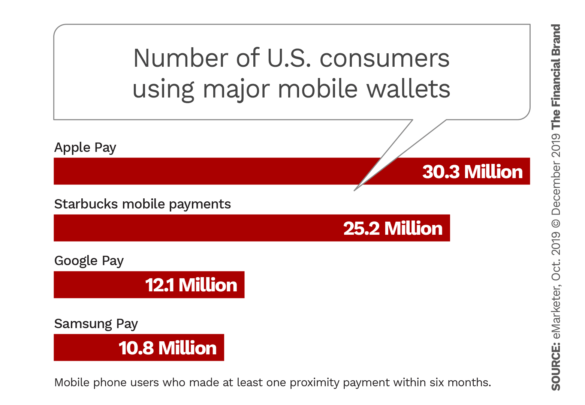 Yet half of consumers still find “no reason” to use mobile payments, and 63% say they need clear and consistent clues around mobile payment options, according to a report by Origin.

And even when they’re willing to try mobile payments, few people use them regularly. Only 6% of consumers that install a digital wallet or payment app will use it again within 30 days, according to a report by Adjust and App Annie. That compares to a 30-day retention rate of 15% for mobile banking apps and 9% for apps overall.

“Winning users is an uphill battle — even if marketers invest in paid campaigns to do it. … The hardest part may be the effort required to change current consumer attitudes,” the report says.

Then there’s the fact consumers aren’t buying into the selling point that mobile wallets are more convenient than plastic, as it takes just as long to pull out and scan their phone as it does a card. There just isn’t yet a strong enough value proposition, says an analyst from 451 Research in a Pew report.

Even though tokenization makes mobile payments very safe, consumers still have big concerns about security, Reville observes in Mercator’s Payments Journal. And while many merchants do accept mobile wallets, the concept is so new and little used, consumers and staff are often unsure how to do it. This leads to what Reville calls the “burn factor.”

“If someone tries to pay with their mobile wallet and it doesn’t work after one or two tries, they are much less likely to try it again,” he says.

Okay, But Maybe this Really Is the Time for Mobile Wallets

Mobile wallet advocates continue to put a positive spin on low adoption rates by saying we’re right on the tipping point. Are they right this time?

As we’ve seen with electric cars, it make take years before a new a development gets legs. With mobile wallets, several forces converged in 2019 to potentially make the next two to three years a period of pivotal change.

First, the growing deployment of NFC technology by retailers and consumers is expected to expand the infrastructure to support mobile wallets. According to Berg Insight, NFC will be a part of almost all POS (point of sale) terminals by 2022. In addition, most new consumer phones are now NFC-enabled and come preloaded with mobile wallets.

Second, big tech is also using its scale, infrastructure and influence to lead consumers away from their physical wallets and into their mobile ones. We’ve already mentioned Apple Pay. In addition, Google’s new offering of “smart checking accounts” in partnership with financial institutions could be a boost to Google Pay. Amazon and Chase are also working on a financial wallet. And retailers such as Starbucks and Walmart have lured millions of customers to the concept with rewards and convenience.

But what could complete a perfect storm for mobile wallet adoption is what Morgan Stanley says is an economic “youth boom” by Generation Z. Conservative estimates say their buying power is already $148 billion, and young consumers love person-to-person payment mobile apps such as Venmo and Zelle, according to a report by Billtrust. Nearly four out of five of them use P2P at least once a month. Even though Gen Zers are not overly fond of credit cards, it’s not a stretch to think they will embrace digital wallets.

Meanwhile, adoption of digital wallets is already surging around the globe. Bain predicts that by 2022, half of all e-commerce payments and more than a quarter of point of sale payments will be made by e-wallets.

Financial Institutions Must Be Ready

Whether mobile wallets take off in 2020, 2025 or 2030, banks and credit unions must be ready to capitalize on the evolution of payments.

Certainly there are benefits. One study by the University of Illinois found the average transaction amount and frequency increased after adopting mobile wallets. Much as they do with credit cards when compared to cash, consumers spend more and make more frequent purchases with non-cash payment methods.

Bain banking consultant Gerard du Toit told CNBC that banks and credit unions may find it harder to stay top of wallet with mobile wallets. Unlike with a physical card where consumers make a conscious choice on what to use, they tend to set a default method and forget it.

“With mobile you have a registered card on file, and you’re going to stick with that card in perpetuity unless something happens to jolt you out of using that card,” he said.

What banks must do now is position themselves and their cards to be the go-to choices for payments in the big wallets. Many are already integrating services such as Zelle and Venmo into their apps to enable customers to send money to each other.

Some now take proactive steps to guide their customers to adopt digital wallets. For instance, Bank of America promotes digital wallet adoption on its website by guiding consumers on how they can use them in-store, online and in-app. There’s a section on how to install and set up the wallets.

While mobile wallets aren’t expected to instantly catapult to the mainstream payment method, financial institutions must stay on their toes as the risk of moving in early far outweighs the risk of falling behind.

“One year’s results don’t necessarily mean we are on the verge of a ‘hockey stick’ curve on the horizon, but it does give a digital pay enthusiast like myself some hope that others will be join me in using their phones to pay,” says Mercator Advisory Group’s Pete Reville.