Banks and credit unions have wildly different strategies with respect to both loan and deposit growth in the year ahead. There are a few areas, however, where everyone agrees: digital channels are critical, starting with online account opening tools. But not everyone is actually walking the talk and putting their money where their mouth is.

Only one in five bankers feel their institution has the data analytics skills it needs. Three quarters say their contact centers are lagging. A third feel their branch delivery model is outdated. And about half say their digital banking capabilities are not ready for the future. Credit unions give themselves similar grades.

These are among the findings in a report from Cornerstone Advisors, What’s Going on in Banking 2019: Is the Party Over?

While the level of “future readiness” among both banks and credit unions may be similar, their strategic priorities for the year ahead vary greatly. Banks will be concentrating on business relationships, with commercial loans and deposits as major areas of emphasis. Credit unions, however, will focus on consumer relationships, with greater importance placed on products like auto loans and checking accounts. 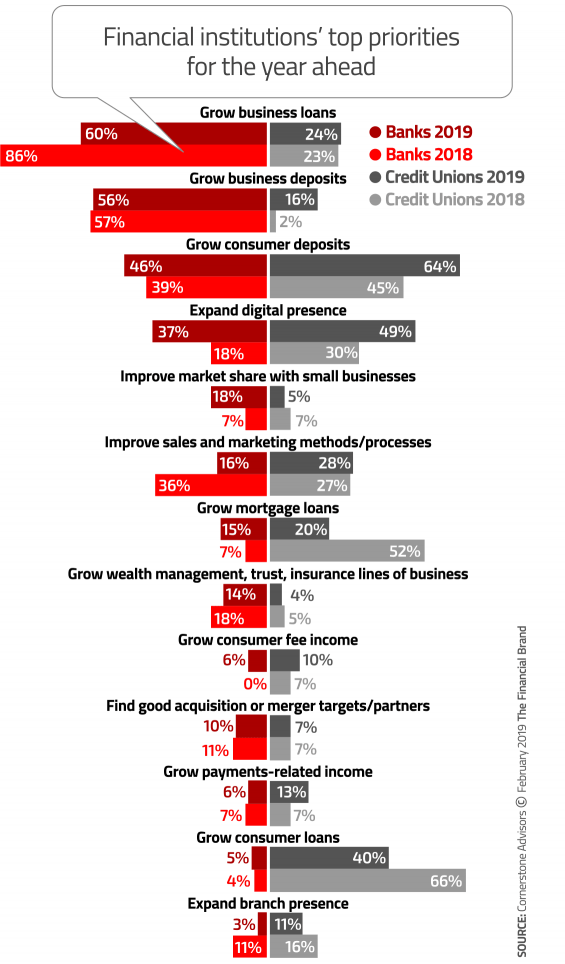 Expanding digital presence was a top priority for 37% of banks and 49% of credit unions, reflecting a strong interest and intent to improve on digital fronts.

“Expanding digital presence is a priority for an increasing number of bank and credit union executives… finally,” Cornerstone notes in the report.

But Cornerstone suggests that banks and credit unions seem to be more talk than action when it comes to key strategic initiatives and emerging technologies — areas such as artificial intelligence, machine learning, and robotics process automation.

Overall, among both banks and credit unions, the survey found that one out of four institutions plans to increase tech spending by over 10% in 2019. Among banks, 59% planned for more modest increases between 1% and 10%, while two thirds of credit unions planned that same modest increase.

Where’s this money going? When asked about their specific spending plans, institutions said they generally plan to improve and upgrade existing technologies rather than introduce any new ones. Many plan to spend on upgrades to mobile banking (46%) and online banking (48%). About a third of respondents say they intend to modify and improve their call center systems. And many institutions plan to spend on modifying and improving (25%) or adding anew or replacing (36%) their ability to process person-to-person payments.

For example, when asked about fintech partnerships, the top priority for both banks and credit unions was tech that could improve or institute digital account opening. Among both banks and credit unions this need ranked higher in importance than did other leading fintech priorities, including payments and lending and credit. Among banks, 70% consider digital opening very important and 26% somewhat important. Credit unions came in a bit higher, with 76% rating digital opening as very important and 23% somewhat important.

“Growing deposits” was the top worry among both bankers and credit union executives in Cornerstone’s survey. Half of the respondents cited deposit growth as a priority for 2019. (In a related vein, the second-highest concern among both groups was the interest rate environment.)

Traditional players face competition from direct banks and similar competitors whose dominant channel is digital. They have had to develop digital account opening capabilities out of necessity. Some traditional institutions have been opening online-only arms of their own in order to compete.

“Financial products can be complex and sometimes emotional, so people seek guidance and advice,” the Forrester authors write. “Yet many banks, credit unions, and credit card issuers still make it difficult for prospects to get human assistance through digital touchpoints. Crossing over to a branch or contact center usually means starting from scratch rather than continuing the purchase journey they already started.”

This synchs with another change detected in Cornerstone’s survey — the near doubling of banks and credit unions intending to add or replace their new account and teller system. In all one in four respondents have such plans. Cornerstone’s report noted that this was surprising to its analysts, but the data were verified.

In the report, Sam Kilmer, Senior Director at Cornerstone, suggests that the reason for this increase in spending was the desire to consolidate — or at least coordinate — systems used for digital opening and branch opening of accounts.

“The market lacks confidence in the ability to grow customers while they are seen less frequently,” says Kilmer. “It translates into system changes, but the need for internal talent is also acute.”

In Cornerstone’s survey, executives are asked to assess the “future readiness” of certain functions in their institution. Bankers graded their marketing departments as “somewhat” or “very” future ready by 44% of the sample. Marketing departments at credit unions received similar grades, with 47% of respondents saying they were “somewhat” or “very” prepared for the future.

That doesn’t mean marketing will be seeing any huge investments in areas like analytics or technology. Plans favor more modest modifications and improvements rather than replacing them or adding completely new systems.

For instance, The report suggests that some institutions have “given up on trying to improve their existing CRM apps and, instead, will look for new systems in 2019.” With CRM technologies, 32% favored upgrades while 25% plan to add new systems or replace old ones.

Similarly, institutions say they are twice as likely (32%) to upgrade as they are to bring in new marketing automation tools (16%). They are more likely to upgrade existing data warehouse systems (39%) and data analysis/business intelligence systems (41%) than to be buying new ones or replacing old ones (only 15% in both categories).

On the other hand, at the top of the pyramid, 52% of the survey sample will be upgrading their reporting/dashboard systems, and another 16% will be acquiring new ones.