Subscribe Now Get The Financial Brand's FREE Email Newsletter
It's surprising that so many banks overlook YouTube, the world's second-largest social media platform and search engine. It can be a valuable channel for bank marketing and advice videos that improve the customer experience and brand awareness. Experts say the best course is to just get started and optimize along the way.

While many bank marketers watch YouTube for entertainment, few fully utilize the platform for their institution. The video-sharing platform offers a significant opportunity for banks to market their products, build loyalty and enhance the customer experience.

However, YouTube can be tricky to master, requiring the right mix of relevance, authenticity and search optimization. Experts say willingness to experiment and allowing time for results to germinate are keys to YouTube success.

“It is really underutilized and a missed opportunity for most banks and credit unions,” Brian Reilly, Digital Marketing Nerd at BankBound, told The Financial Brand. “The biggest misconception is you need a whole crew, storyboard and a year of content mapped out,” says Reilly. “Realistically, many institutions just need to get started and see what sticks.”

A Top Search Engine with a Long Shelf Life

While most banks haven’t even started on YouTube, many of those that do use the platform primarily use it as a passive parking spot to host a few videos, Reilly observes. They are missing valuable marketing opportunities by not taking a more active approach on the platform.

Stick Around for a While:

YouTube can benefit banks and credit unions in several ways. First, it offers another platform to improve search engine optimization (SEO) and ensure your content reaches a broader audience. It also speaks to consumers in a growing channel with higher engagement and conversion rates. Third, YouTube videos can have a “very long shelf life” with high Google rankings and engagement years after posting, according to The Refinery. Whereas a Twitter post or TikTok video becomes ineffective within an hour, a YouTube video’s lifespan is 20 days or more. 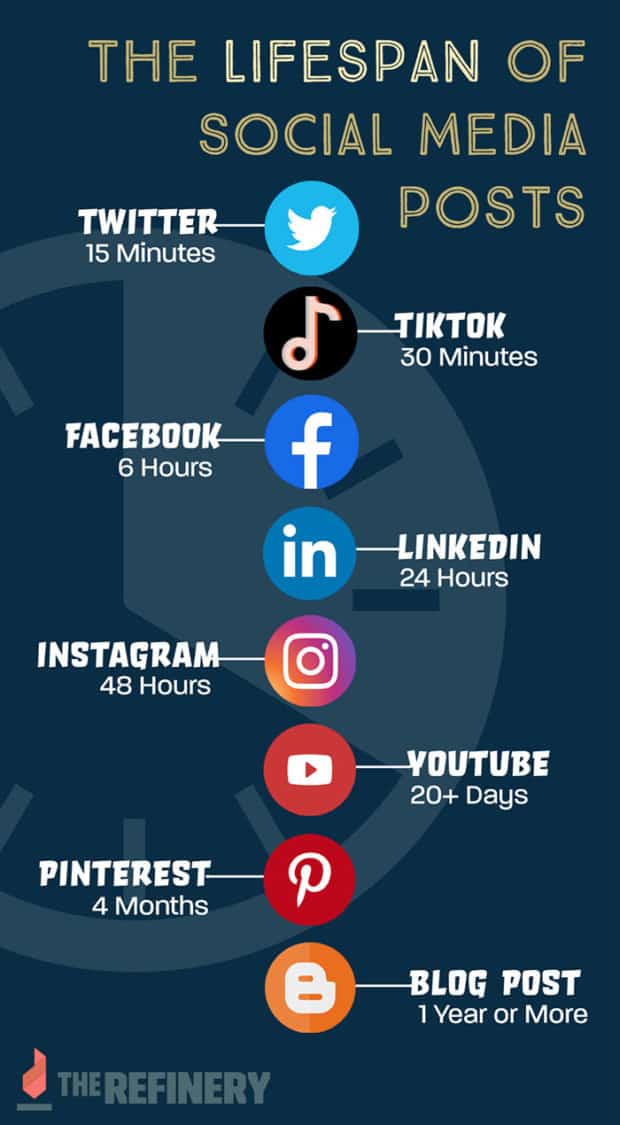 Some believe the actual lifespan is much longer. As consumers often watch videos based on “more views” rather than the date, YouTube videos can pick up steam over time. This creates a snowball effect of views and engagement, says Hope Morley, COO of video ad agency Umault. One video Umault posted in 2015 is still gaining interactions and conversions.

“Once you have a good chunk of views (over one thousand for consumer/general interest content, less for specialized content), two things will happen: more people will click, and YouTube will serve it to more people,” Hope states. “Views begets views.”

Finding Success with Algorithms and Authenticity

Despite the opportunities, YouTube is not easy to master. A company might invest money and effort into top-shelf content only to have it go unnoticed while ordinary people with smartphone videos can gain millions of views. Experienced marketing professionals often say YouTube success comes down to relevance, authenticity and algorithms.

This can be challenging for banks as the nature of their content isn’t that exciting. Even financial institutions with the best YouTube metrics fail to match the performance of even moderately-successful YouTubers in other areas.

Nevertheless, YouTube is not just about views and subscription numbers. It can serve as a critical marketing and customer service channel for financial institutions to reach their customers, Mike Dinneen, Senior Vice President of Marketing at American Heritage Credit Union, told The Financial Brand. American Heritage’s channel hosts recaps of community events and how-to videos such as how to perform a stop payment.

American Heritage is on track to have 100 videos on its channel by the end of 2022. It maintains a regular schedule for content, typically posting a monthly video. Last year, the credit union posted several commercials, post-event coverage, and live streams of some community events. It also launched a video fraud-prevention series and is set to release new videos with demos of its forthcoming mobile app and contactless cards.

While American Heritage only has 2,300 subscribers and three million views, it provides a solid return on investment, validated by surveys and other feedback loops. “It serves as a good proxy to determine how engaged your membership is,” says Dinneen. “It also makes sense for any digital strategy to include YouTube, as the paid media investment alone has a measurable and scalable impact on our marketing plans.”

Metrics and Measurement Are a Challenge

YouTube metrics don’t always align or tell the whole story. For example, Tinker credit union ranks #3 for video views with more than 12 million total yet has a mere 218 subscribers on The Financial Brand’s Top 100 Credit Unions on YouTube. Meanwhile, America First (UT) has over 2,500 subscribers but only about two million total video views.

In addition, even the most successful YouTube channels have many videos with very few views. Often, even among the top channels, the numerical success milestones often come from a small portion of videos that gain traction. For example, Wells Fargo’s Active Cash Card video in late January 2022 has nearly 50 million views. Its video on setting financial goals posted just a few days later has less than 1,000 views.

This is why it’s essential to post consistently and experiment with a variety of content, strategies, and video formats, says Reilly. As YouTube can take a while to bear fruit, it should be viewed as a long-term play focused on quality and continual improvement. Nate Black, YouTube expert at ChannelMakers, says successful YouTube channels often don’t even find their groove until they have at least 50 videos under their belt.

“Promotion is the missing element for many YouTube videos that are collecting dust.”

Video creation is only part of the equation. Marketers also have to promote their videos to boost momentum while also optimizing SEO to ensure search traffic continues down the line. “It really is a combination of many things, and the algorithm plays into that,” says Reilly. “Promotion is the missing element for many of those videos that are collecting dust.

“The buyer’s journey is a spider web of interactions. See what sticks and where there’s engagement,” Reilly advises. “Some banks just need to get out there and optimize it as they go.”