Subscribe Now Get The Financial Brand's FREE Email Newsletter
Dance videos aren’t the only content you’ll see on TikTok. Consumers are increasingly turning to the short-video app for financial education, investing tips and cryptocurrency advice. Should bankers become TikTok content creators? Some already have. Here's what they're doing and why.

Bank marketers can probably expect some pushback if they recommend using the TikTok video sharing app. But if they decide move forward anyway, they’ll become part of what is currently the hippest mainstream social media channel. And they won’t be alone.

Several banks and credit unions are already using the controversial channel. They’re there mainly for one reason: TikTok is hugely popular among Gen Z and younger Millennial consumers.

TikTok is owned by Chinese company ByteDance and there have been concerns raised about national security since the app collects a great deal of information from users. Those concerns have quieted down, but issues of privacy and security remain and marketers should be aware of them.

And, yes, some of the billions of short videos posted on the app — which might appear next to your message — may offend some sensibilities. Offsetting that, if you want to reach younger adults, TikTok is their platform of choice.

TikTok may not be where your older customers are today, but it’s definitely where next generation customers are hanging out, and ads there are 'insanely cheap.'

TikTok is an important social media channel for banks and credit unions, says Deborah Boyland, Founder of Fintech Content Ltd. First of all, it’s cheap compared to other channels. “The low cost per click of TikTok ads is insane,” enthuses Boyland. “You can get great results with a small budget.” She adds that a big bank with an equally big marketing budget could dominate the space.

FNB Community Bank in Midwest City, Okla., is an early TikTok creator with a small budget and big results. Julie Waddle, assistant vice president and marketing manager, told Independent Banker that a few of the bank’s videos have tens of thousands and even millions of views. “TikTok brings awareness and different eyes to our name that would not have seen us before.”

Not bad for a bank with $570 million in assets.

The Oklahoma bank’s videos aren’t flashy — and that’s good. They have that homegrown and authentic TikTok feel. FNB Community Bank posts TikTok videos about financial topics such as creating a budget or why you shouldn’t leave a balance in Venmo, but most videos are just feel-good and fun. There’s footage of the bank’s ugly sweater contest and recipes for pumpkin spice cookies.

Here are a few quick budgeting tips! What would you add? #bank #budget #howtobudget

The FNB videos have a similar look and feel regardless of the topic. They are all set to music and feature captions rather than audio. Other smaller banks using TikTok include Farmers State Bank of Alto Pass, Ill., and Flagship Bank Minnesota, Wayzata, Minn.

Launched in 2016, TikTok boasts one billion users, according to data reported by Statista. That compares to Facebook’s almost three billion users and YouTube’s nearly 2.5 billion.

Whenever he’s asked which social media platform is “best,” Eric Cook, Chief Digital Strategist for WSI and founder of TheLinkedBanker.com, always tempers his response that it depends on where your audience is and if they are likely to use TikTok or a more business-focused platform like LinkedIn.

TikTok’s short (less than 60 seconds) videos are more like a snack than a sit-down dinner: They are not particularly nutritious but are quick and satisfying. The app is not about beautifully curated content but authentic content. Part of TikTok’s appeal is that the content speaks directly to the viewers.

According to Insider Intelligence, time spent scrolling through TikTok has been growing fast, and the app is notorious for pulling users in and holding their attention. Over 40% of Gen Z spends more than three hours a day on TikTok.

Yes, TikTok does attract a younger demographic, but almost one-third (31%) are 35 years old or older — those same consumers who are buying homes, saving for their kids’ educations, and investing for retirement. 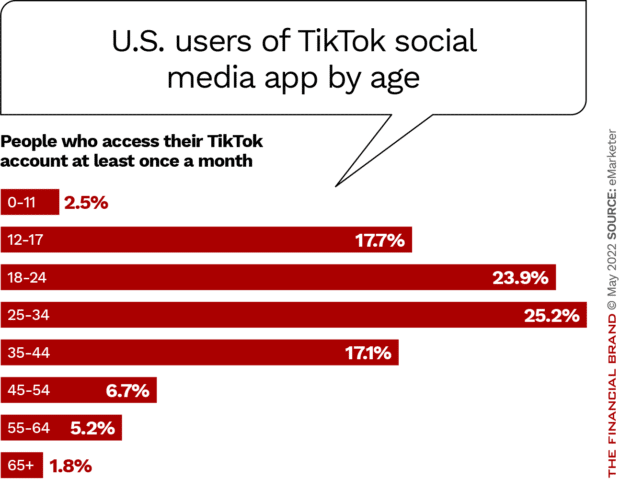 TikTok is where Gen Z is going for financial advice instead of to their parents or a bank branch. Nearly a quarter of investors aged 18 to 40, and 41% of those between 18 and 24 years old, have sought financial advice on the platform, according to a survey conducted last year by Magnify Money.

But not all the advice is good advice.

Anyone with a smart phone and an opinion can create content on TikTok — including people espousing questionable financial advice or hare-brained get-rich-quick schemes. Gen Z is getting financial information on social media, but that advice could hurt, rather than help, them.

Banks and credit unions have an opportunity — maybe even an obligation — to use social media for 'edutainment' on important topics.

Boyland says personal finance, mortgage advice, crypto and investing are a few of the TikTok niches that “are literally made for banks, and banks aren’t there.”

Banks and credit unions are always talking about increasing “engagement,” says Boyland, and TikTok is the perfect channel. “People actually watch the ads, enjoy them, and comment on them. It’s a whole different advertising world.”

Read More: Best in Class: How Banks Are Mastering the Social Media Game

Celebrity influencers have been selling product for decades, from Humphrey Bogart for Whitman’s Sampler to Samuel L. Jackson for Capital One.

So why not use TikTok “celebrities” to sell financial products as well? “TikTok users are loyal to the creators and personalities they follow, explains Paco Suro, General Manager, Global Partner Payments at Tipalti. “Identify influencers who match your brand objectives and goals to connect directly with consumers,” he advises.

Step Bank, a neobank that targets the teen market, has teamed with 16-year-old Charli D’Amelio, a TikTok megastar with 141 million followers, to convey its messages. At the other end of the spectrum, NatWest hired influencer Star Holroyd to provide content for its TikTok videos such as how to save money:

It’s what you do Today that makes Tomorrow possible. @starholroyd #TomorrowBeginsToday

It’s smart to find content creators who are up to date on what’s trending and who are willing to sell their skills to help you build yours, says Boyland. “I’m not talking about hiring a digital agency,” she adds, “I’m talking about someone in their living room who has followers. Videos don’t need to be overly edited or costly to produce. They need to be engaging and current — and current changes every second.”

Get Confident with Videos

Even if you decide TikTok isn’t for your institution, there’s a clear consumer preference for shorter, informal videos. More established social media channels like Facebook and Instagram recognize this and are prioritizing more video content. Instagram launched Reels as a competitor to TikTok. Even LinkedIn may roll out TikTok-like video content on their platform, says Cook.

Boyland recommends watching some TikTok videos and creating content in your personal life to get experience with the platform. Cook agrees, “Even if you don’t’ think TikTok is where you need to be, familiarize yourself with the concepts and why it’s popular,” he says.

No need to get get your entire team singing or dancing, says Cook, but do think about how you could turn consumer questions into short videos. With music, of course.