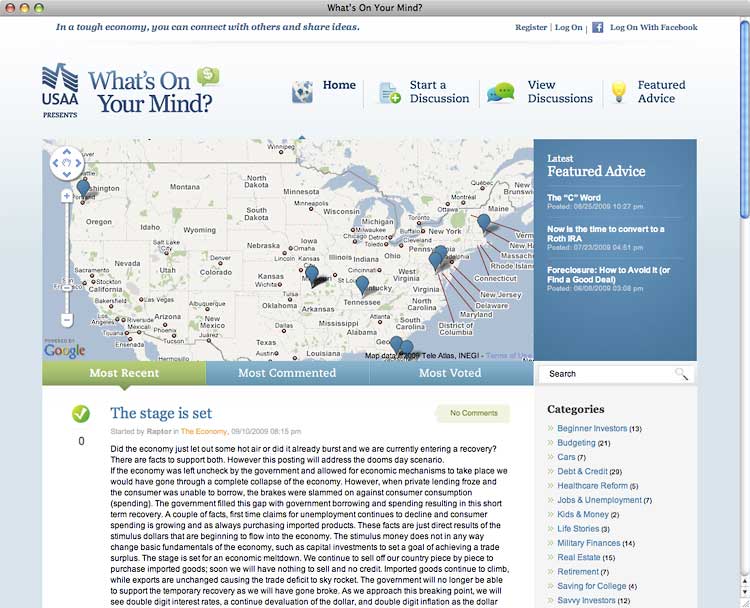 “In a tough economy, you can connect with others and share ideas.”

That’s the stated purpose of USAA’s latest social media effort centered around an online forum hosted at WhatsOnYourMind.com. In the forum, USAA encourages people to “share your thoughts and issues with us.”

You don’t need to be a USAA member to participate in the forum. Members and non-members alike can go to the What’s On Your Mind site, create an account and start sharing their thoughts.

The site allows Facebook users, including 30,747 USAA fans, to seamlessly float between the two sites with one logon via Facebook Connect.

In the forum, there are currently 165 submissions in 14 separate categories, including:

Keep in mind that USAA has over 7 million members — many of them deeply engaged with the brand — so participation in the forum thus far is less than impressive.

Key Question: The site has been live since April, so why did USAA wait until the end of summer to start issuing press releases?

USAA, while often celebrated as the best financial services company in America, apparently has some detractors who are more than willing to take advantage of the invitation to “express your concerns and ask those tough questions,” as USAA says on its microsite. For instance, here’s a sampling of some of the submissions:

Most people seem to be using the forum for its original intent: asking hard questions that may make USAA uncomfortable, but they are fair and polite. The good news is that even when people drop in to complain, there are plenty of USAA members willing to come to USAA’s defense.

Reality Check: You’ve heard the expression, “If you can’t take the heat, stay out of the kitchen.” Well, the Web 2.0 is a virtual boiler room that can, at times, become a scathing cauldron of nastiness and negative feedback. If you have a thin-skinned C-suite, you should think twice before diving into the deep end of Web 2.0’s waters, because if you crack the door and give people a chance to speak their minds anywhere online, you had better anticipate some rough comments. It doesn’t matter if you create a microsite dedicated to the cure for cancer, you’ll still get angry comments. That’s the reality of the internet with all its anonymity.

As with all forums, there are a handful of very active members, illustrating the veracity of the Web 2.0 maxim that estimates some 90% of comments come from only 10% of participants.

People with names like “Kork,” “FullBird,” “NashvillePete, “Raptor” and an axe-grinder sporting the online handle “OMG what happened to USAA” bicker back and forth, arguing about mostly silly things like the regulatory structure of USAA.

Every now and then, a USAA employee named John Hancock (yes, that is his real name) steps in to quell quarrels with gentle reminders. But overall, USAA is not heavily moderating the site, and they seem pretty comfortable letting people say pretty much anything without a lot of intervention.

“I’ve been asked to edit/ban/remove some posts by other members of the site, but I want to let everyone know that is a very slippery slope, and one I’m not inclined to head down,” Hancock writes.

Hancock’s official title is something never seen before in the financial industry: “USAA Conversationalist.” In this role, Hancock works in corporate communications “listening, learning and participating in the conversation on What’s On Your Mind,” while also contributing to USAA’s presence on Twitter and Facebook.

Sidebar: Online forums, which were around a long time (decades) before blogs, are in many ways different — and superior to — blogs. The most important distinction is that anyone can initiate a topic, unlike blogs where there is essentially only one author. For whatever reason, online forums are the most neglected social media tool in the financial services industry today.