To enter the challenge, business owners had to launch a special Look Up With US Facebook app and explain why their business was looking up. Each answer became part of a mosaic tile display on the bank’s Facebook page. When users clicked on a tile in the mosaic, they could read the entry, vote for their favorite businesses and leave comments. The more votes a business got for its answer got, the bigger its tile grew within the mosaic. 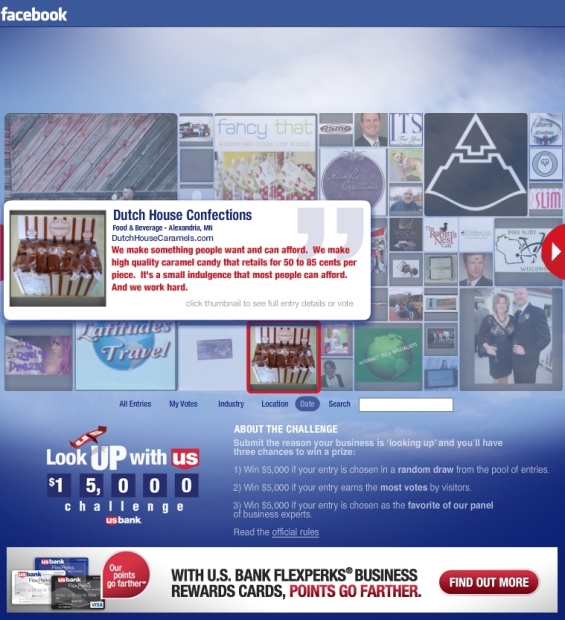 US BANK – ‘LOOK UP WITH US’ FACEBOOK APP
A sliding interface allows users to scroll and view hundreds of entries by navigating left and right
across the mosaic. The more votes a business got, the bigger its tile grew in the mosaic.

The campaign drew a total of 476 entries from small businesses. At the time of the contest, US Bank had around 10,000 Likes on its Facebook page.

The promo was sponsored by US Bank FlexPerks Business Rewards Cards, which sprinkled a modest ad here and there within the contest’s materials. 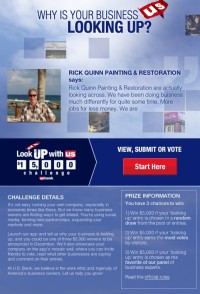 US Bank was hoping to draw entries with “inspiring stories from business owners who are finding ways to succeed despite the tough economic climate,” but most of the submissions offered little in the way of advice or insight. Entries were essentially pleas of deservedness. Instead of answering the question, “Why is your business looking up,” many submissions argued the case, “Why you should pick me.” Not surprising, given the vote-based structure of the contest. But it would have made for a much more enriching experience for the hundreds of non-winners and other visitors who may have benefited from the learnings of their small business peers. Such content would have undoubtedly made for a more socially interactive promotion.

The contest launched October 18 and wrapped up November 15, with prizes distributed shortly thereafter in early December. Business owners had just under a month to garner support and votes for their entries.

US Bank posted a YouTube video of winner Aislinn Barnes’ reaction to her $5,000 award. Barnes, who owns Ozzie’s Cake Designs in Utah, retells her entry submission at the end of the video. Her entry received 208 votes, the most in the competition, making her the “Fan Favorite.”

US BANK – ‘LOOK UP WITH US’ WINNER AISLINN BARNES
Watch US Bank surprise winner Aislinn Barnes with a $5,000 check.

A filmed video surprise visit to another winner, Chuck Adkins of Adkins Auto Salvage in Miamisburg, Ohio, was also posted to YouTube. Mr. Adkins’ answer to the question “Why is your business looking up?” was the “Judges Pick” winner in the bank’s Facebook challenge.

US BANK – ‘LOOK UP WITH US’ WINNER CHUCK ADKINS’
The emotion comes out as Adkins and his mother digest what a $5,000 check means to them.

US Bank deserves credit for building a social media promo that (1) targets a specific — and strategically significant — segment of the bank’s customer base, and (2) incorporates a banking product relevant to that segment. Out of every 100 social media endeavors analyzed by The Financial Brand, perhaps no more than 2-3 successfully deliver on these two points. Why is that? Because someone, somewhere claiming to be some sort of expert on the subject said, “You can’t to use social media to sell stuff.” Phooey.

Despite all commonly accepted myths about how social media should only be used to build communities and foster engagement, Facebook has become something much more tactical and practical. As marketing on Facebook has matured, the platform now primarily as a contest entry tool for corporate marketers… and not much else. Sure, there may be a tiny handful of fans and brand devotees willing to leave the occasional comment on a company page, but nearly everyone else neither has the time nor interest in chit-chatting with institutions online, particularly not with banks and credit unions. Whatever level of “engagement” financial institutions have been able to muster on social media channels has come at a price (usually around $1 per person), with giveaways (i.e., bribes) being the best way to obtain fans/likes.

Financial marketers should not be discouraged by this insight. Indeed, they should feel relieved. Instead of viewing social media as this massively transformative innovation that completely revolutionizes customer communications while rendering all other channels meaningless, it should be viewed for what it is: just another tool with specific uses appropriate in certain situations.

If you accept that one of Facebook’s primary roles will be to serve as a focal point for contests rather than swallowing all the hype and overinflated expectations placed on social media, you’ll find the pressure — and how your organization measures success — will be much more manageable.