Standard Bank didn’t like the ads its South African competitor was running, and decided to file a grievance. But rather than route the matter through normal regulatory channels, they headed to Twitter first where they lodged their complaint in the social media court of public opinion.

And with that, the war was on.

Standard Bank’s beef with FNB centered around ads claiming FNB was South Africa’s only bank with free online, mobile and phone services. FNB ads also suggested that they were the first bank to have an account with no monthly management fee.

Standard Bank felt these claims were false advertising and misled consumers, since Standard too offers all these services for free, including its Mzansi account, which was launched in October 2004 and has never had a regular monthly fee.

In protest, Standard Bank had lawyers file a formal complaint against FNB for misleading advertising with the Advertising Standards Authority (ASA), South Africa’s equivalent of the FCC.

But before pursuing the official — and more conventional — route through the ASA, Standard Bank stopped by Twitter to tell the world what it was up to.

“We instruct attorneys to lodge complaint with ASA against FNB for advertising that misleads the public,” Standard Bank told its 6,500+ Twitter followers. 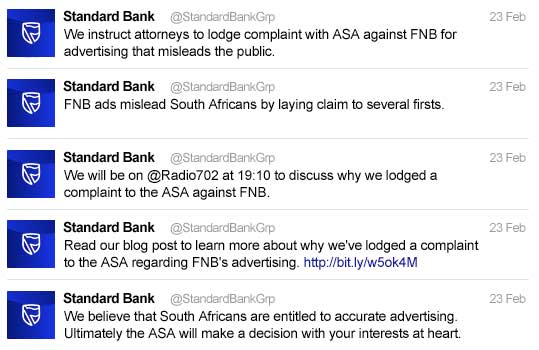 Standard Bank’s series of complaints about FNB were retweeted over 100 times by other Twitter users.

“The consequence was a high volume of tweets from angry FNB customers defending their favorite bank and pointing out Standard Bank’s lack of customer centricity and other weaknesses,” Langlois commented. 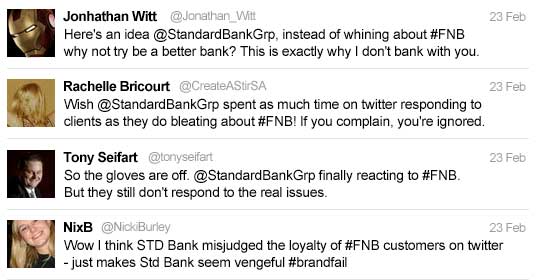 FNB CEO and prolific tweeter Michael Jordaan could not have been happier. He chimed in as well, encouraging his followers to check out the various responses criticizing Standard Bank’s tweets and praising FNB.

FNB’s official account @rbjacobs was reluctant at first enter in the conflict, although they did respond positively to customers who rushed to defend the bank.

“It wasn’t good for Standard Bank at all,” said media analyst Walter Pike. “The clear victor in this conversation was FNB.”

By Pike’s count, @RbJacobs actively engaged in the conversation 161 times, while @StandardBankGrp only 59.

If you want to get a sense for how much fun FNB is having on Twitter, go check out their @Steve_Beep_Bank and @BeepBank accounts and the story behind it. Or look at the bizarre cartoon character CEO Jordaan is using for his Twitter avatar.

Not everything with FNB’s Twitter project is rainbows and butterflies though. Blogger Tiffany Markman recently took FNB to task for what she characterized as an extremely disappointing Twitter experience with the bank. Her story is very revealing, and worth a read.

An hour and twenty minutes after sending its first tweet about FNB, Standard Bank published a blog post explaining its actions.

“We believe that South Africans are entitled to accurate advertising, hence our intention to approach the ASA with a complaint.”

Standard Bank’s blog post went on to explain that it had lodged a similar complaint against FNB with the ASA back in 2003. At the time, FNB acknowledged that it was not the first bank to offer free internet and telephone banking services, and agreed to retract the claim.

Seven minutes after the blog post was published, Standard Bank tweeted a link to it. Comments on the blog started streaming in, and they were less than sympathetic to Standard Bank’s cause. Indeed most expressed passionate support for their rival, FNB.

“Waaahh, waaahh… Dry your eyes,” the first commenter wrote. “I had a Standard Bank account for eight years and had nothing but bad service. Switched to FNB, never looked back. Maybe spend more time dealing with your inadequate service than complaining about trivial stuff. You know what they say: if you cant beat em, criticize them!”

“I’m currently in the process of moving all of my banking over to FNB from Standard Bank. Why?” asked another commenter rhetorically. “Because for years you’ve done nothing to make banking simpler better or faster.”

More people piled scorn on Standard Bank. “You have now further exposed yourself as a greedy inferior bank that is not willing to improve customer service – but would rather engage in petty [Twitter wars] than satisfy your customers,” added another anonymous commenter.

You really have give credit to Standard Bank for even publishing these kinds of comments. Most banks probably wouldn’t print praises for a competitor anywhere on their website, and some banks might even wonder if they should pull their entire blog down after seeing how it can be turned against them.

Bellinda Carreira, Director of Interactive Marketing for Standard Bank, said Standard Bank realizes it “can’t control what the community wants to talk about, and wouldn’t try to.”

“We are encouraged — but not surprised — to see how passionately the social media community has responded to our impending complaint to the ASA,” the bank said.

Standard Bank Stands By Its Approach

Standard Bank seems satisfied with its social media attack plan, and doesn’t think there is any need to apologize.

“The announcement was made in social media because we value our online communities and felt that they should hear it first hand from us,” the bank explained. “We respect our community’s views and value the transparent relationship we share with them.”

“We didn’t want them to find out via a third party, and it also allows us to have the conversation immediately and disseminate the facts,” Carreira added.

Carreira said that the bank’s decision to announce its case against FNB on Twitter was “not a knee-jerk reaction,” and pointed out that the announcement “went to mainstream media at the same time.”

“Whenever we do a press release, we tweet it, and have done that since we started our social media accounts four years ago.”

Carreira downplayed the social media aspect, saying the goal wasn’t to take the fight to Twitter, and that the move was “not part of a specific strategy.”

Zamamiya Zee Ford, a Johannesburg resident who watched closely as the whole conflict played out, seemed to reflect the majority opinion in a comment she left on the Standard Bank blog.

“As much as I get where Standard Bank is coming from,” she wrote. “I do think the whole situation was handled a bit carelessly. In terms of PR, FNB came out tops.”