Subscribe Now Get The Financial Brand's FREE Email Newsletter
A free 32-page white paper looks at research and recommendations on how credit unions are using social media today, what's working, and what isn't.

According to a survey fielded by Third Degree Advertising, 41% of credit union marketers think social media is very important to their marketing strategy and 74% said their organization intends to increase its level of social media use in the future. Yet 53% of respondents rated their credit union’s social media efforts as not effective in helping them achieve marketing goals.

But then again, they aren’t spending much time on it either… 67% of credit unions surveyed said they invest only three hours or less per week managing their social media accounts, and 46% said it’s difficult to find the time to continually generate content. Maybe that’s why 47% said they saw “low response levels.” 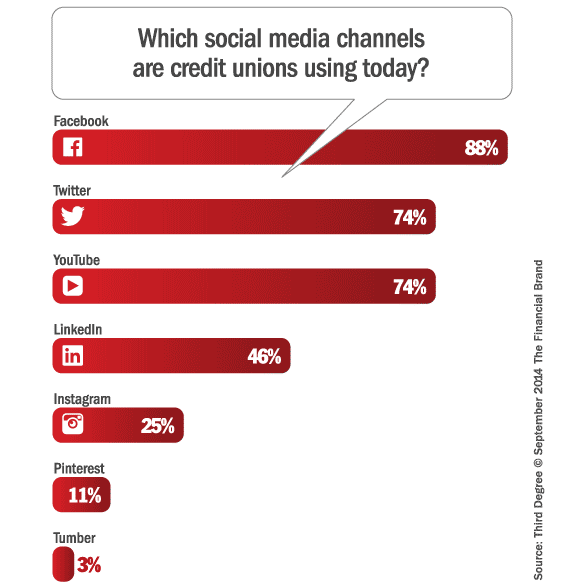 The research Third Degree conducted became the basis for a meaty 32-page white paper on social media for credit unions. The report includes a number of tips, insights and best practices for social media teams.

At least survey respondents credited their CEOs with having a generally positive mindset toward social media. Four out of five credit union CEOs feel it’s at least worthwhile to engage in social channels, if not “essential.” But still… one in every 12 say it’s either “unnecessary” or a “waste of time.” 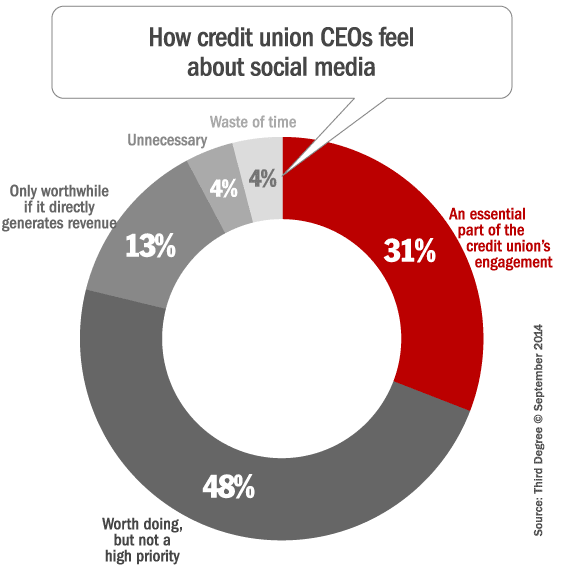 According to Third Degree, most credit unions get no- to low traction with their social media content, and seldom achieve any significant level of engagement. Why? Third because low-engagement content is easy and inexpensive to create, whereas highly engaging content typically requires more investment — time, energy and money. 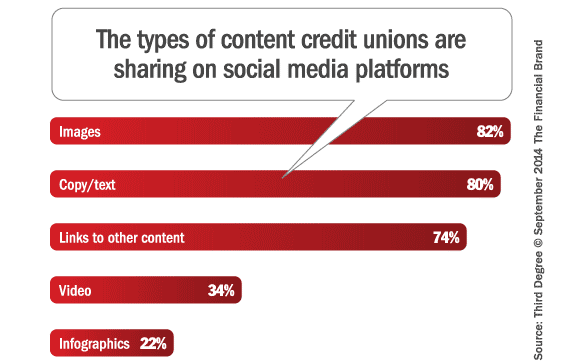 “If you focus most or all of your social media effort on low engagement content, you’re not going to achieve much organic reach,” says Third Degree in the report. “And if you spend a lot of time simply linking your members to financial information provided by other sites, you’re undermining your position as an expert capable of meeting their needs.”

Third Degree cautions credit unions against biting off more than they can chew. Every credit union doesn’t need to be active on every single social platform out there. They have to pick their battles carefully, and for some credit unions, that might mean whittling down to only one social network.

“Using social media in a meaningful way takes time and effort, so don’t be afraid to be selective about how you want to engage,” recommends Third Degree. “If your credit union can’t put the resources into developing content that’s highly engaging, it won’t matter how many channels you’re on.”

Third Degree’s 32-page eBook, entitled “Why Your Social Media Isn’t Working (And What To Do About It”) is available for free after completing a simple form. The complete report includes dozens of insights, tips and recommendations. Topics covered include social media channel selection, content strategy, getting C-level buy-in, and in-depth advice for all the major social networks — Facebook, Twitter, YouTube, LinkedIn, Instagram, Tumblr and Pinterest.