Nearly everywhere banks and credit unions turn, it seems someone is telling them how involvement in social channels is an absolute imperative. One of the more popular reasons cited for social engagement is that financial institutions can answer people’s questions and address customer complaints. And nearly all the big banks have heeded this advice. Even The Financial Brand has singled out customer service and support as one of the (few, limited) practical applications of social media in retail banking.

But everyone is doing it…

Here’s a list of some major U.S. banks that have Twitter accounts dedicated to providing customer service and support.

You’ll notice BofA has sent the most tweets, which is no surprise since they are the financial industry’s initial pioneer of the Twitter support concept. Two of these eight banks have Twitter teams with 10 employees. Only one (TD Bank) offers Twitter support seven days a week.

It seems nearly every big bank in the world is either doing this already or planning on it soon. But is this really such a good idea?

If we suck, please tell all your friends

There are some folks who would argue that any and every additional service channel that can be offered is inherently “good.” But just because customer service can be delivered in social channels doesn’t necessarily mean it’s a good idea.

Key Question: Do banks and credit unions really want to encourage people to gripe about their organization and its products in public forums?

Using social media as a customer service tool could be likened to putting a problem resolution desk in the middle of your town square. Set up the desk, hook up some loudspeakers, and broadcast every customer’s beef to everyone within earshot.

Do you really want the whole community to hear customer after customer grouse about problem after problem? No. That’s why banks put those small, private offices in the back of their branches — so prickly customer issues can be resolved quietly.

How many customer complaints go unanswered in social channels? Most. Among those customers who receive replies, how many get their problem resolved within Twitter? Very few. Why? Because it’s extremely difficult to resolve sensitive financial issues in a public setting. Customers don’t want to be sharing their account number with everyone on Twitter, and then there are the security and privacy issues involved when having online conversations in a third-party venue. Who knows who at Twitter and Facebook have access to their users’ information… and what they do with it?

So how do most customer issues get addressed by financial institutions on social networks? The bank or credit union sends a reply to the customer publicly, something along the lines of, “Thanks for your message. Please send us a direct message (DM) and we’ll have someone contact you.” 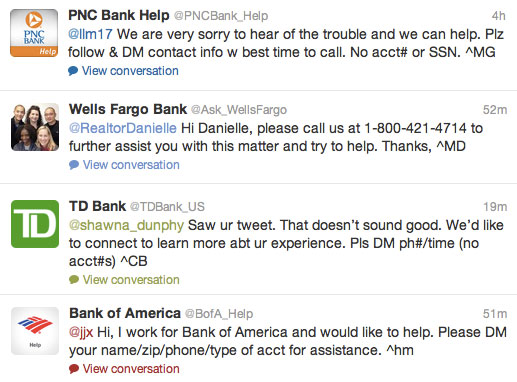 The standard replies commonly sent by many banks offering help on Twitter.

After a bank receives the direct message, a service rep often pushes the conversation to another channel — usually the phone — because most banking issues simply cannot be resolved via Twitter.

A redundant (and costly) layer in the customer service process

How efficient is it to tell everyone who contacts you through social channels that the exchange must immediately be migrated to another (existing) channel? It’s almost like some banks have hired completely new teams of social service reps whose primary function is to funnel customers to the old customer service teams.

Aren’t the same number of service requests basically being processed, but instead of having 4-5 channels, there are now 6-7, and each requiring its own set of resources (staff, budget, management)?

If you have live, online chat, why not encourage people to use that instead? Service and support through online is infinitely more secure than over social networks. Online chat gives you an environment you can control, with total privacy, and it is much easier to archive conversations than on third-party platforms.

From the consumer’s point of view, live online chat is superior in almost every way to support through social channels. It’s faster, with response times averaging under a couple minutes for online chat vs. 2-48 hours on Twitter or Facebook. It’s more secure, so a wider range of transactions and inquiries can be accommodated. And most importantly, it results in a higher rate of “one touch” resolutions.

Reality Check: Consumers hate getting passed off and shuffled around. It makes them feel like they’re getting the run around. Consumers want their problems handled by one person — usually the first person they deal with — and in the channel in which contact was initially made, preferably on the first interaction.

If you’re going to redirect consumers to another service channel and you have instant online chat, you could essentially set up an auto-reply system in Twitter and Facebook effectively saying, “Please visit our online service center at website.com. It’s open 24/7, and you can chat with a live agent almost immediately who will answer all your banking questions.”

From novelty to service channel of preference?

Is service and support over social networks little more than a novelty — for financial institutions and their customers alike? Will people still be tweeting complaints about their banks 10 years from now?

Yes… if banks keep giving consumers the impression that service on Twitter or Facebook is somehow better and more special. People seem to think airing their grievances over a social network will get them faster, more personal attention. Is it true? In some cases, yes, sadly it is.

Perhaps some consumers believe the only way to get attention is to be the squeakiest wheel in the most public place. They may assume that bitching publicly on Twitter is more likely to trigger a response from the bank, and by a real person.

Or perhaps consumers have become so jaded, so frustrated with service in other channels that they’d rather try something — anything! — new and different.

A few years ago, the only kind of consumer tweets you’d see about a bank would be one of exasperation. They had tried to resolve their issue in another channel, and were usually expressing their frustration and dissatisfaction on Twitter. Nowadays, you’ll see people head straight for Twitter the instant any need, issue or question pops up.

Bottom Line: Instead of focusing on which channels you think are appropriate for service and support issues, you should focus on the issues themselves. If financial institutions fixed the problems they face today — particularly in their existing service channels — perhaps they wouldn’t hear so many people complaining on social networks.