Subscribe Now Get The Financial Brand's FREE Email Newsletter
Every quarter since 2013, The Financial Brand has collected data on the social media activity for hundreds of banks and credit unions around the world. Here are the trends, findings and benchmarks for Facebook, Twitter, YouTube and Instagram through the first quarter of 2022.

The social media benchmarks for Q2 2022 will be published Friday, July 15.

In the marketing world, social media has become a powerful metric — specifically to understand what consumers want and need from the brands they buy from and interact with. And every industry nationwide has jumped on the bandwagon. 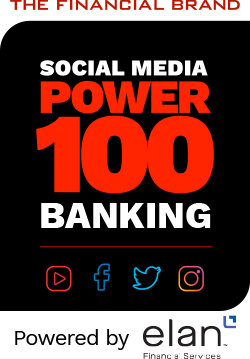 Here are the top insights pulled from The Financial Brand‘s Social Media Rankings for Banks and Credit Unions for the first quarter of 2022:

The cause of this drop is likely Facebook taking action to purge fake accounts (think: spambots and “Russian trolls”).

Among the top 100 banks, they collectively added a combined 993,735 new likes/followers in the first quarter of 2022, an average growth rate of 0.71%. By comparison, the growth rate among these banks averaged 0.62% in the same period a year prior.

Key Fact: Over one-third of the top 100 banks on Facebook actually shed likes/followers during the first quarter of 2022.

Among the top 10 banks on Facebook, four hail from India, three from Nigeria, two from the United States (including Capital One and Chase Bank) and one from the Philippines.

The top 100 banks on Twitter have collectively sent nearly 8 million tweets — 418,933 new tweets in the first quarter of 2022 alone. Among these banks, they average 3.5 followers for every tweet they’ve posted.

Key Fact: Banks have an average of five times the number of followers on Facebook than they have on Twitter.

Videos from the Top Banks on YouTube Viewed 1.6 Billion Times in 12 Months

Collectively, the top 100 banks on YouTube have garnered a whopping 5.8 billion all-time video views, with over 335 million of those coming within the first 90 days of 2022 — a quarterly growth rate of 5.8%.

Traction on Instagram Remains Elusive Even for the Most Active Banks

At the end of Q1 2022, the top 100 banks on Instagram had a combined 11.5 million followers on Instagram, adding 408,213 of those in the first three months of the year. These banks have 1.6 million more followers than they had a year prior, reflecting an annual growth rate of 16.5%.

Free Newsletter: Subscribe to The Financial Brand for the Latest Banking News

Likewise, the median number of Facebook likes is 25,381, although the credit unions at the bottom of the top 100 list barely snagged 16,000 likes. Only the top five credit unions garnered over 100,000 likes and they are headquartered in Virginia (2), Utah (2) and Florida.

Key Fact: The top 100 credit unions on Facebook added an average of 228 likes in the first quarter of 2022.

Credit unions struggle to garner the Facebook likes banks do. The top 100 banks on Facebook added 993,735 new likes in Q1 2022, which is five times the total number of likes the top 100 credit unions have on Facebook.

Key Fact: The top 100 credit unions have four times the number of likes on Facebook than they do followers on Twitter.

In the first 90 days of 2022, only 11 credit unions generated more than one million new views in comparison whereas 40 of the top 100 banks picked up over a million and the Bank of Baroda with the newest views topped out at 64 million new views.

Credit Unions Need To Work Harder Than Banks for Followers

All credit unions The Financial Brand tracks in its social media database averaged a 6:1 ratio for followers to accounts followed, meaning credit unions have to establish a balance of who they follow to maintain their own following. For comparison, banks have to follow far less Instagram users to pick up followers as they average 273 followers for every account followed.