Subscribe Now Get The Financial Brand's FREE Email Newsletter
Social media has become an essential financial marketing tool. But many banks and credit unions use it to push products, rather than build relationships. Here's how financial players can use social media instead to celebrate the people and times of their communities.

While nearly all companies know they need a social media presence, many banks and credit unions have not embraced social media enthusiastically. Consider, as a benchmark, that Twitter launched in mid-2006, over a decade ago. Yet, on average, community financial institutions have been active on social media for just under three years, according to research by Kasasa.

Many have — reluctantly — set up social profiles because they don’t want to appear to lag behind their competitors or because consumers expect to find them on social channels. Yet many of these same institutions don’t feel they are leveraging social media channels effectively, nor are they sure about the ROI of social, period.

When they become at all active, many banks and credit unions merely use social media to push promotions, which tends to result in very little consumer engagement. That’s because social media is all about connection.

When used effectively, social media channels offer banks and credit unions opportunities to foster, strengthen, and celebrate the communities at the heart of their business. An intentional, dedicated, and evolving social strategy has the potential to powerfully engage consumers and differentiate an institutions’ brand.

People naturally turn to social media to celebrate. We’ve all seen (or posted) the birth announcements and wedding photos on Facebook, many of which dominate your feed because of the disproportionate number of likes and comments. Celebratory posts not only drive engagement, they are also a key tactic for building community. When people come together to celebrate, whether online or in person, they feel they are a part of something special.

Here are four ways banks and credit unions can tap into this feeling.

1. Tie into Annual or Recurring Occasions

Whether it’s a summer BBQ or holiday caroling party, think about unique — and recurring — ways to bring your community together and to capture that excitement on social media.

For example, anyone who lives in Portland, Ore., knows that the city is obsessed with summer street fairs. Trailhead Credit Union sponsors or hosts a number of these street fairs and shares out photos to its Facebook fans: 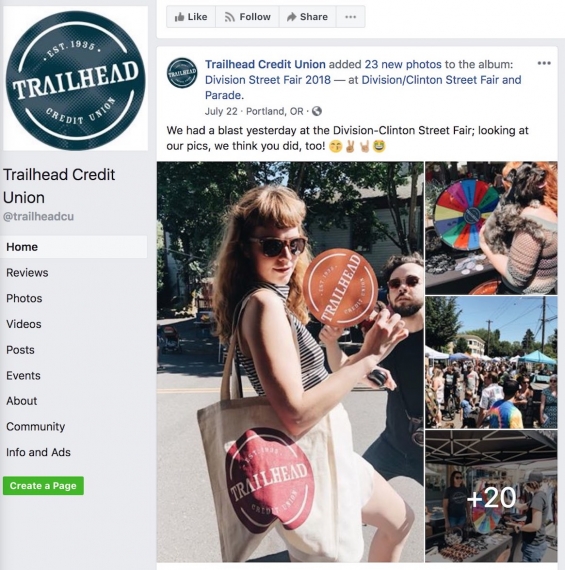 This initial Facebook post links to a photo gallery celebrating the street fair in all its variety. 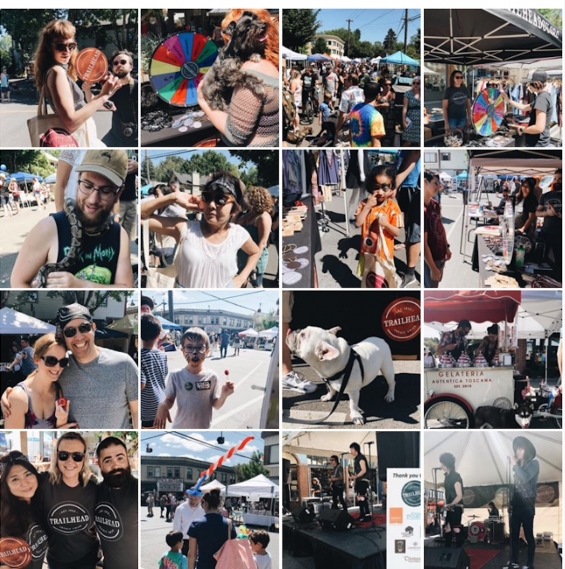 Citizen’s Bank of Edmond hosts a family-friendly community block party, “Heard on Hurd,” in downtown Edmond, Okla., on a monthly basis. Heard on Hurd has its own dedicated Facebook, Twitter, and Instagram profiles, which it uses to share photos and generally generate excitement about this signature event. 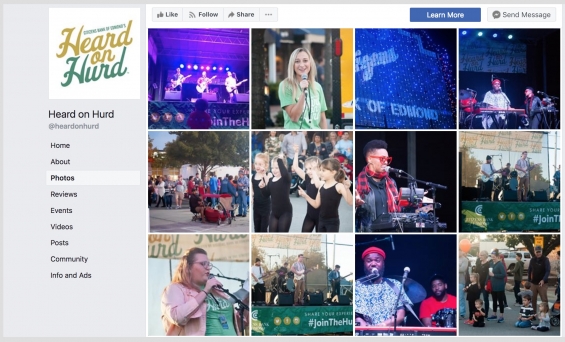 Mountain America Credit Union highlights its own community involvement without coming off as self-serving — this post gives the sense of genuine excitement for the cause and collaboration with other organizations. 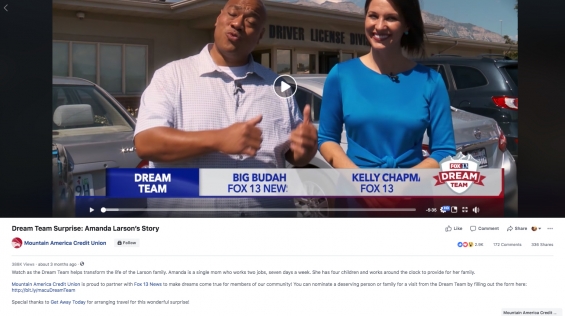 In this post FOX 13 Dream Team and Mountain America Credit Union prepare to change the life of the Larson family with timely aid.

Los Alamos National Bank (LANB) in Northern New Mexico has a robust community giving program, which it showcases and celebrates on its social media channels. As part of a series of Instagram posts focused on holiday giving, they show the LANB community celebrating the holiday season with the members of the Betty Ehart and White Rock Senior Centers. 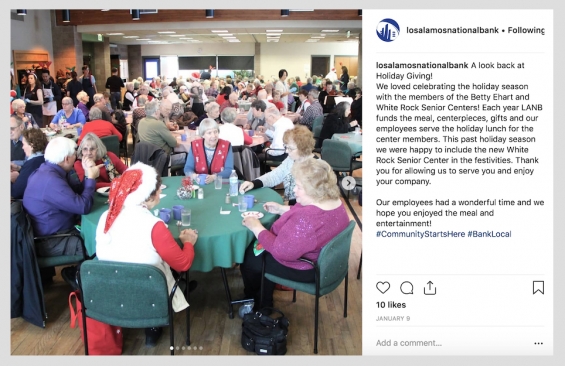 Did a consumer you serve purchase a home, pay off a car loan, or reach another significant financial goal? Ask permission to feature and celebrate their victory. Or, incent them to share their milestones with a unique hashtag.

DC Credit Union actively solicits stories from its members on Facebook. The institution follows up by capturing these stories on video and sharing them on its website and Vimeo channel. 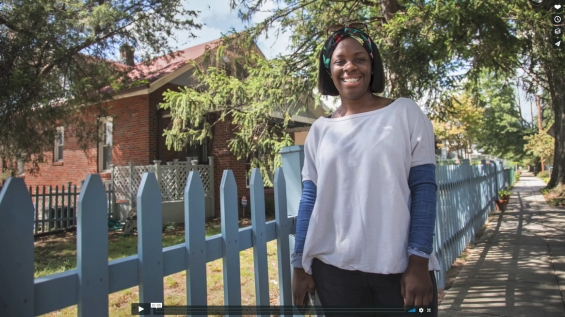 In this Vimeo posting, which was also repurposed on the DC Credit Union site, “Tynice” speaks of how the credit union helped her finance her first home.

Heritage Bank, Olympia, Wash., has a page on its website dedicated to customer stories and turns to its social media channels to promote and celebrate them. This video shares the story of its business banking customer, Olowo-n’djo Tchala, who built one of the most successful fair-trade body care organizations in the industry. 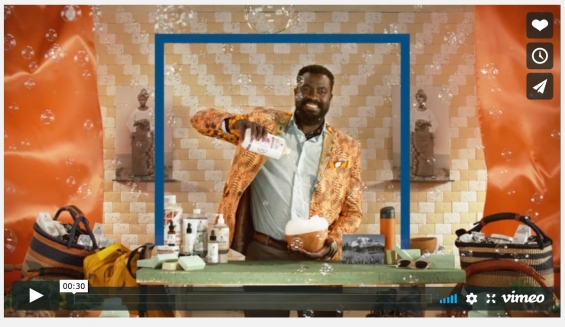 4. Celebrate Your Institution’s Own Milestones

Involve your members and social media followers in your company story by sharing and celebrating your milestones, like company “birthdays,” reaching notable membership numbers, opening a new branch, or the hiring or retiring of a notable team member.

This post from Point West Credit Union shows appreciation for its retiring team member and lets credit union members know to express their gratitude as well. 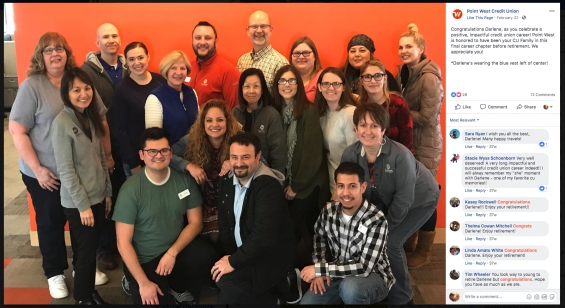 Chase Bank not only turns to social media to celebrate branch openings, but also to celebrate the communities they serve. On Twitter, rather than share a bland photo of a branch exterior, Chase highlighted local students who created murals for a new Washington, D.C., location. 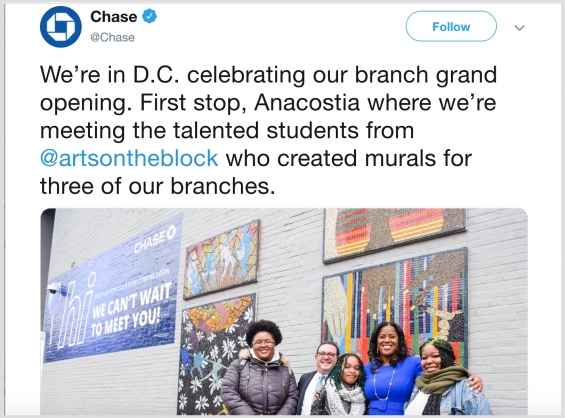 People turn to social media to celebrate. Don’t miss this opportunity to publicly cheer on consumers, employees, and community at large. Stepping up this activity will not only help humanize your institution but will enhance the positive feelings and good vibes that consumers feel toward your brand.