In 2012, few had ever heard the term “selfie.” For those who have defined as a photo of the photographer shot by the photographer, typically taken with a smartphone or webcam and uploaded to a social media website (history of the word here). But by the end of 2013, usage of the word “selfie” increased 17,000% and Oxford Dictionaries named it word of the year. During the 2014 Oscars, a selfie taken by Ellen Degeneres crashed Twitter.

Not long thereafter, banks and credit unions started looking to capitalize on the selfie insanity, with social media promotions offering cash and prizes for self-shot photos. Here are a few examples and ideas, plus some tips on how to structure your own contest.

1. Fairwinds Credit Union – “Pour Some Savings on Me #PiggySelfie Sweepstakes”

This promotion from Fairwinds Credit Union links savings accounts with selfies. Just take a picture of yourself with a pig, a piggybank or a likeness of a pig and post it on Twitter or to the credit union’s Facebook page.

The contest had six prizes total, all piggybanks stuffed with cash. The amount inside each piggy bank was a mystery, with amounts ranging in value from $250 to $1,000. Five winners were drawn at random, with the final winner chosen by judges.

Two of the #piggyselfie photos submitted to Fairwinds (below). 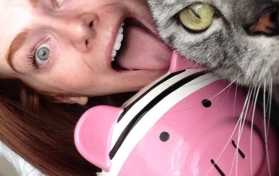 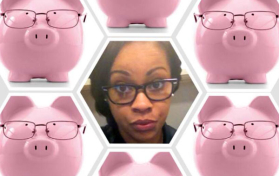 Insights & Analysis: Piggybanks are relevant to banking, and are an easily accessible theme for a selfie promotion — images of pigs are everywhere, which helps yield a wide range of creative entries. Coining your own hashtag can make marketing easier, and is very helpful for tracking submissions in social media promotions. Having cash prizes with random amounts stuffed inside piggybanks is brilliant: it taps people’s gambling nerve, and adds another layer of suspense to the contest for all involved.

Kinecta FCU’s “Win a Grand on the Strand” contest called for the best beach-themed selfie — lounging on the sand, frolicking by the ocean or cruising on “the Strand,” a bike path running along the Los Angeles waterfront. For those who can’t make it to the beach, Kinecta allowed participants to shoot selfies that approximate the beach experience — sporting a Hawaiian shirt or showing off some cool shades. The grand prize: $1,000. Other prizes included a stand-up paddle board, a surfboard and a Strand Cruiser bicycle.

Entry Process: Snap a beach-themed selfie and post it to Kinecta’s Facebook page, with extra credit for shooting the photo at a participating local merchant who is displaying the Kinecta selfie contest sign. Contestants can post a selfie once a day for more chances to win. Winners selected by Kinecta based on creativity. 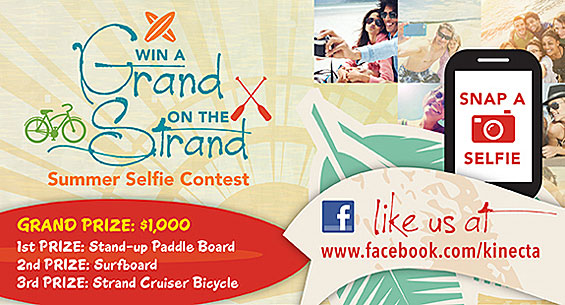 Insights & Analysis: A grand prize valued at $1,000 is usually enough to get people really engaged and trigger participation. It’s also very smart for credit union’s to tie themselves to the local community whenever and wherever they can, so Kinecta’s insider reference to something only locals know (the “Strand”) is a relevant theme for their selfie contest. This theme would have been more effectively reinforced if Kinecta required that selfies had to be shot in, on or near the Strand. Instead, the entry criteria — basically anything related to summer — evokes a more generic feeling: “The Sun & Sand Selfie Contest.” There’s nothing particularly wrong with making “summery beaches” the common central element in the contest, but it’s not the “community celebration” it could be. 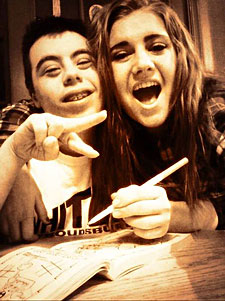 One of the selfies S&T received.

S&T Bank encouraged its Facebook fans to share a photo of themselves at work for a chance to win a 32 GB Apple iPad Mini and a $25 iTunes Gift Card. S&T Bank posted selected and approved pictures to their Facebook page, then allowed people to vote on their favorite. The selfie with the most ‘Likes’ wins.

Entry Process: Become a fan of S&T Bank’s Facebook page, then email your photo and contact information including name, phone number and preferred method of contact and brief job description to [email protected]

Insights & Analysis: S&T’s selfie photo contest was designed to support the bank’s “Smart Start” program, a marketing initiative targeting Gen Y/Millennials with a basic suite of banking products. This audience came of age with the advent of selfies, so their generation is the most likely to respond and engage in this kind of promotion. However, the email submission mechanism feels inappropriate for a social media contest built around such a vogue meme. Selfie submissions should be allowed via social channels like Facebook, Twitter and Instagram.

Western FCU asked Facebook users to take their selfie in front of one of the credit union’s branches or ATMs, then send the photo in for a chance to win a $100 gift card. 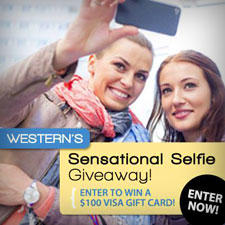 Entry Process: Like Western FCU’s Facebook page, complete the online entry form, then submit a “selfie” with a Western branch or Western ATM in the background. Entries limited to one per Facebook user, but participants could get two additional entries for every Facebook friend they recruited to enter giveaway.

Insights & Analysis: Many selfie promotions are gratuitous, with little/no connection back to banking. But Western’s selfie contest is tied to their brick-and-mortar delivery channel. It’s unusual for a credit union to have 38 branches spread across 12 states, so it makes sense for Western to call attention to this fact. Western’s selfie concept seems to encourage branch and ATM visits, so why limit the contest to only one entry per person? Why not allow participants to visit as many branches and ATMs as possible — almost like a scavenger hunt — and enter multiple times?

Sainsbury’s Bank in the UK asked its Facebook fans to share a selfie taken with the smartest tech purchase they’ve ever made. The winner, selected by Sainsbury’s Facebook admin, won £50 Sainsbury’s Gift Card.

Insights & Analysis: It’s unclear why Sainsbury’s Bank themed this promotion around tech savvy purchases. Were they trying to position themselves as a tech savvy institution? Were they trying to draw attention to the ease and convenience of the mobile/tablet banking solutions they offer? If you’re going to have a selfie contest, it helps to have a reason that’s relevant to your institution’s current strategic priorities. In simple terms, selfie promotions should make a connection back to banking. Sainsbury’s entry mechanism — posting photos as comments on a Facebook post — doesn’t work. It’s much better to create and sustain energy and interest in a promotion with frequent posts that fans will see on an on-going basis. No one is going to dig through an old Facebook update to check in and see what’s going on.