Seattle Metropolitan Credit Union’s “Intentionally Left Bank“ campaign, is now moving into its second phase. The Washington-based financial institution is asking consumers to share their stories about why they’ve chosen a credit union over a large corporate bank.

When the comment is posted to the credit union’s website, www.7principles.coop, the person receives a free “Intentionally Left Bank” t-shirt in the mail (while supplies last).

The credit union ordered around 500 shirts total. One week into the promotion and the credit union has mailed out about 250 so far. Each shirt cost approximately $6.00 to produce and $2.50 for postage and packaging).

Key Insight: The t-shirt itself is remarkably unbranded. It probably took some restraint to resist slapping the Seattle Metropolitan logo on the front, but the way the shirt was executed, it’s sure to trigger more double-takes and spark word-of-mouth conversations — more so than if a logo had been conspicuously placed.

The credit union received over 150 comments within 24 hours of launching the online promotion.

Seattle Metropolitan says it is hoping that dissatisfied bank customers will take their business to locally owned and operated credit unions.

“The public obviously feels very strongly about what is going on in the banking industry at their expense,” Seattle Metro’s Vicente said. “‘The Intentionally Left Bank’ campaign echoes the frustration of people in our community.”

One Seattle Metropolitan member, Luke M. wrote, “I left my bank because it (Washington Mutual) had such a role in the whole subprime mortgage catastrophe. The bank went bust, the CEOs made millions, employees lost their retirement funds, and people all over the country lost their homes.”

Key Insight: You have to offer people something of value in exchange for meaningful contributions to your social media efforts. All too many financial institutions think people will simply rush in to help them “build a community,” but “What’s In It For ME???” If Seattle Metro had naively assumed people would just voluntarily flock to their website to rant about banks with nothing in return, the credit union would have been waiting a long time before it saw 150 quality submissions.

Seattle Metropolitan is advertising itself as Seattle’s local, not-for-profit alternative to large, corporate banks. Last fall, the credit union handed out $10 free to 182 people with no other condition than to “pay it forward.” 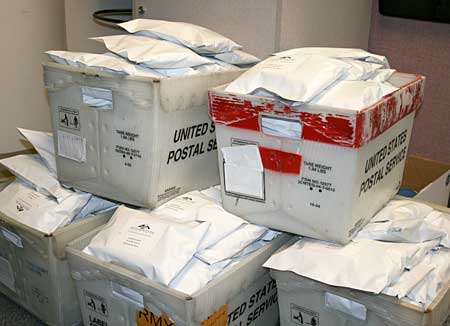 PILES OF T-SHIRTS READY TO GO OUT IN THE MAIL 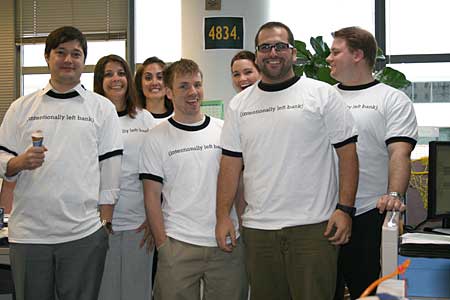 THE SEATTLE METRO TEAM
Jill Vicente, who is quoted in this article, is hiding in the back (under the “4834” sign).