Regions Bank is the 17th largest bank in the U.S., with $117 billion in assets. In the last Power 100 study conducted by The Financial Brand, Regions came in ranked #46 for overall social media activity for banks in the English-speaking world. But they also jumped ten spots in just one quarter (January through March 2014) — the only bank to do so – putting them in the top 20 U.S.-based banks.

What did they do in the first three months of the year to gain this kind of traction? Let’s take a look at the Regions’ three primary social platforms — Facebook, Twitter, YouTube — to get a better sense of what the bank did right.

Regions’ Facebook content on their Facebook page for the first three months of 2014 generated significantly more engagement and interest among their fans than the material the bank was sharing in the last quarter of 2013.

A primary driver of increased Q1 engagement for Regions was the #seethegood contest. The contest ran in March and encouraged people to post comments and photos of inspiring people for a chance to win a $250 Regions Bank Visa Gift Card along with a ‘See The Good’ gift basket, and another $250 Regions Bank Visa Gift Card for the person they nominated. Entries were judged by Regions’ representatives (likely the bank’s own social media team), and the top five entries were posted in a Regions Facebook photo album for finalist voting. 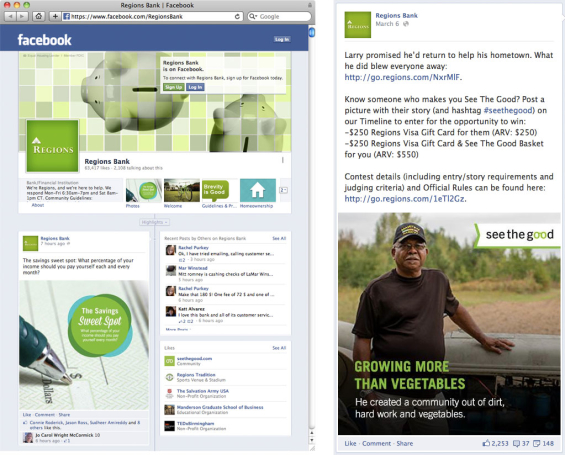 Regions Bank Facebook page (shown left), and a post on their page that generated a large volume of social media love.

The Regions Riding Forward Scholarship Essay Contest, which ran from January 20 to coincide with Martin Luther King Day through the end of February, encouraged students to submit a 500-word essay about an African-American who inspired them. The contest awarded 16 $5,000 scholarships to high school seniors and 16 $2,500 scholarships to college freshmen, sophomores and juniors from (or currently attending college in) states with Regions Bank branches. While this contest did not generate as much engagement as the #seethegood Contest, it did garner a respectful number of likes and shares relative to the majority of the bank’s posts. 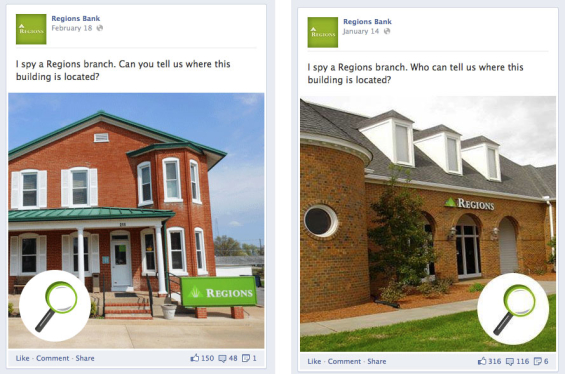 The bulk of Regions’ social media gains in the first quarter of 2014 came from YouTube. In mid-December, Regions posted a :30 second TV commercial (video below) that has been viewed over 350,000 times since — 59% of the bank’s new videos views in Q1. Wrapped in an SEC sports theme, the spot talks about mobile banking solutions, Regions Visa debit/credit card, and a vast branch/ATM network spanning the eastern United States.

The “SEC Playbook” TV commercial almost certainly didn’t generate 350,000+ views organically. It’s much more likely that the video was used as part of a paid YouTube ad campaign. If the video had been a viral hit, it would definitely have more than the four positive ratings it does (0.00108% of total viewers). But Regions success with this one YouTube ad should suggest to other financial marketers that this method of social media marketing can work; it suggests YouTube is a viable alternative to traditional TV advertising.

A smaller (but still significant) source of new views on Regions’ YouTube channel in Q1 was the brand’s “Give Life the Green Light” spots posted in February. Three spots in total — Mobile Deposit, Mobile Banking and Personal Pay — generated more than 38,000 views collectively. That’s not too shabby, especially considering that each video promotes banking services.

Also of note, a January 7 video post highlighting the Regions Bank Better Life Award being awarded to a Regions associate generated over 50,000 views.

Regions’ Twitter stream is positioned as a place to “get helpful advice and tips from a Regions Social Customer Care representative” and the stream offers just that. While Twitter content over the last several months seems fairly status quo, Regions did see one of the highest net increases in followers among top 20 U.S. banks. 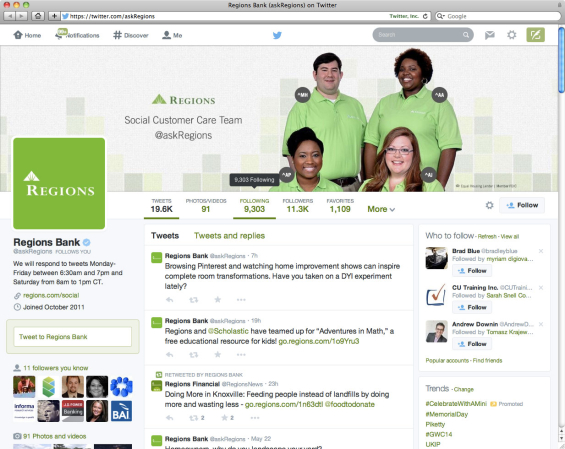 For a bank that just launched their Facebook page and YouTube channel not that long ago (back in April of 2012), Regions is faring quite well in social channels. In addition to rising in the Power 100 rankings, a J.D. Power 2013 study based on responses from more than 23,200 U.S. online consumers ranked Regions Bank as one of the four best performers in social media content within the banking industry. They have a lot of momentum behind them.

In an interview with Bank Innovation, Liliana Grip, VP and social media implementation manager for Regions said, “We want to educate our customers, provide access to financial tools, and keep it friendly, simple, open, staying true to the brand. Customers come, they find utility and do something that helps them in some way.”

A review of the bank’s social content reveals that Regions is indeed delivering on their social media mission — and as long as they continue to do so in light of Facebook Zero — we should see them continue to hold their own in social channels.