Subscribe Now Get The Financial Brand's FREE Email Newsletter
Here's a fascinating break down and in-depth analysis of all the customer comments posted to the Facebook page for Regions Bank in September 2014.

Facebook users have been able to post comments to company pages for a while now. But not every bank allows the public to see and read those comments. Roughly 20% of financial institutions have removed the “Posts to Page” section from their Facebook page, including Chase, Citi and TD Bank. (Note: The “Posts to Page” aren’t comments posted in reply to updates published by the bank within its Timeline. This is unsolicited feedback from people who just have something on their mind, unrelated to what’s going on in the Timeline.)

It’s understandable why a bank might feel tempted to hide general comments like these from the public; many of the comments are critical and plenty are vitriolic. But social media experts would say that keeping this information off your Facebook page is a mistake — that you should embrace transparency on the social web. After reviewing all the comments left for Regions Bank in September, The Financial Brand would agree.

From September 1 through September 30, 2014, there were a total of 139 comments left on Regions Facebook page (again, not counting those in the Timeline). The Financial Brand reviewed every one of them — along with the replies from Regions — to get a sense of how the conversation was playing out.

Here’s a snapshot of the data.

Comments With Replies from Regions Representatives: 134 (96.4%)

One example of how Regions responds to comments left on its Facebook page. Notice how the social media service rep (Amy) redirects her answer to a question about branch hours to focus on all the digital and self-service options available.

There are a few things financial institutions can deduce from the raw numbers, without even looking at the contents of the message themselves. First, consider this: Regions Bank has over $118 billion in assets. With just over 100,000 ‘Likes,’ that means they have one ‘Like’ (fan) for every $1.2 million in assets, which is about the industry average. Regions serves more than 8 million people in 16 states, so their Facebook fan base only represents 1.3% of their overall customer base.

What does this mean for other financial institutions? It means that most banks and credit unions don’t need to worry about providing support and service in social channels. Think about it: In one month, Regions received 139 comments… with a fan base of over 100,000… out of 8 million customers. That’s 0.0017% of their customer base leaving a comment for them. If your institution has $500 million in assets and serves 30,000 people, you would see maybe one comment per month. Maybe. Do you need a full-time staffer to manage this? No, you don’t.

Regions, on the other hand, has at least three social media reps fielding queries on Facebook — Amy, Matthew and Ashleigh — who also handle interactions on Twitter. Their team does a remarkable  job managing the feedback Regions received through social channel. In fact, out of the 139 comments left on Facebook, they responded to 134 of them — nearly every one (96.4%) — and did so within hours if not minutes of when each comment was left. In those few instances where Regions didn’t respond, it seemed pretty obvious why: it was a clear no-win situation for the bank, where engaging with the commenter would be pointless or would exacerbate more negativity unnecessarily.

Granted, most of the replies to comments left by the Regions Facebook team are boilerplate: “Sorry for your troubles. Please send us an email and we’ll call you.” But privacy issues and regulatory/compliance concerns prevent social media service reps from going much further. The truth is, very few customer issues can be addressed by banks solely within social channels; a follow-up phone call will almost certainly be required the vast majority of the time. That not withstanding, it’s still good that Regions responds to each comment. It shows that the bank cares — about people and their problems. Considering how many comments address the subject of “customer service,” it’s better that Regions at least makes the effort to connect with folks and fix their problems.

Reality Check: Some People Can Be Really Mean

Reading through the comments left for Regions, one thing is clear: people can be cruel, especially over the internet. You may believe your financial institution provides the greatest service ever and think it would be fun to engage with consumers directly on Facebook… but you might want to think again. An aggravated, agitated, angry consumer can be one of the nastiest mammals on earth — meaner than a rabid wolverine. They don’t pull any punches. In fact, they will exaggerate and conflate their frustrations — even outright lie (e.g., “I was waiting on hold for three hourrrrsss!”) — just to make their point and to get the attention they feel they deserve.

Out of the 139 comments left for Regions in September, seven were complaints about the bank’s $2 check cashing fee (charged to non-customers). Nearly all of them accused the bank of “robbery,” and promised that they would “never bank at Regions.” A couple said, “I’ll just take the check to my bank and cash it there,” with an implicit vibe of “neener, neener, neener — take that Regions!” It’s ludicrous. You can just imagine what the Regions team thinks when they see comments like this: “So you aren’t a customer today… you already bank somewhere else… and yet you tried to cash a $20 check at our bank… then gripe about a $2 fee… and threaten that you’ll never have a relationship with us because of it??? That’s cool with us. You won’t be missed.”

Among the comments left for Regions, there were quite a few that followed this theme: “This is the worst bank ever. They are thieves. I’m closing my account. I had an overdraft and got charged $105 in fees. Don’t bank there!” After a Regions rep pops in, the commenter would proceed to share an obnoxious sob story about how poor they are, how difficult life is, how loyal they’ve been to Regions, etc., etc., ad naseum. They don’t realize that what they are really saying is, “I’m careless with my finances. I got charged a fee because I screwed up. I’ve had my account with you for five years, so I think you owe it to me to refund these fees.”

This isn’t to suggest that all people are mean and idiotic, nor that comments from the public will do nothing more than bring your financial institution’s social media team down day after day. Indeed, one out of every six comments left for Regions had a positive note. But be warned: don’t dive into social media unless you have a thick skin, because the bulk of comments will test your mettle. Daily.

To Regions credit, they were able to turn around quite a few angry customers, even some of the meanest. People would come in to complain and explain why they would be closing their account, but then after they received a response from Regions, they would flip 180° and start singing the bank’s praises. It’s fascinating to see how a simple email and phone call can salvage a relationship, but Regions was able to do it time and time again. Case in point: the example below from Regions customer Renee Wanamaker. 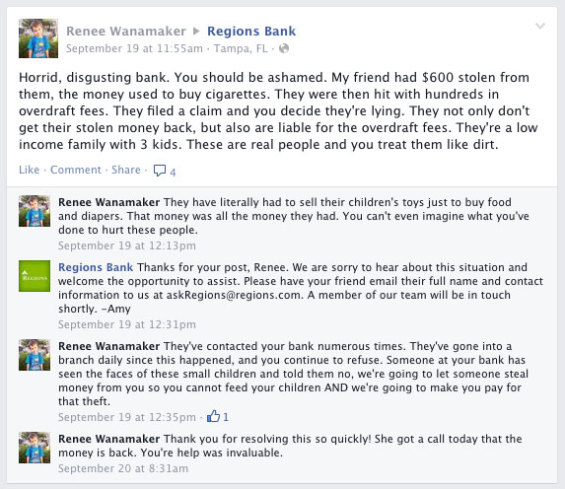 Reality Check: “Excellent service” isn’t defined by how things work when everything is running smoothly. Consumers judge companies’ service based on how they are treated when things go wrong.

Whenever one of Regions social media representatives spoke with a customer on the phone, they would make a point to circle back to the original comment left on Facebook to leave a follow-up: “Very nice chatting with you today [First Name]. If you have any questions or need anything else, please let me know.” Each comment is signed by the rep using their first name. This is very smart. It says to anyone else reading the comments that Regions will respond — personally, with a real, live human being — to people who express concerns with them on Facebook. It humanizes the experience.

Regions Gets It Right for Cancer Patient

Most of the comments left for Regions on their Facebook page are banal. There were a couple people who were curious about whether or not Regions would be involved in the new Apple Pay scheme, which was an interesting diversion from the well-worn memes expressed by most others (the answer is “yes,” by the way — Regions will be part of Apple Pay.) But out of 139 comments, one conversation really stood out.

Katherine Armstrong has breast cancer. She’s undergoing chemotherapy, which has caused all her hair to fall out. Understandably, she prefers wearing a hat. Apparently one day when she went into a Regions branch, the teller told her she had to remove the hat — part of the bank’s robbery prevention policy: “no sunglasses, no hoods, no hats.” After Katherine posted her story on Facebook, her friends Christie Becker and Sheila Rodriguez rushed to her defense.

Here is a situation that the bank needs to know about: should the no-hats policy apply to cancer patients? No, obviously not. How else would Regions have learned about this if not for Facebook? In the old days, they would have learned about it on the evening news (like what happened to Navy Federal Credit Union a few years ago). Instead, they were able to nip a potentially ugly PR problem in the bud, and quell what could have become an outright revolt.

You can see for yourself how it all went down. 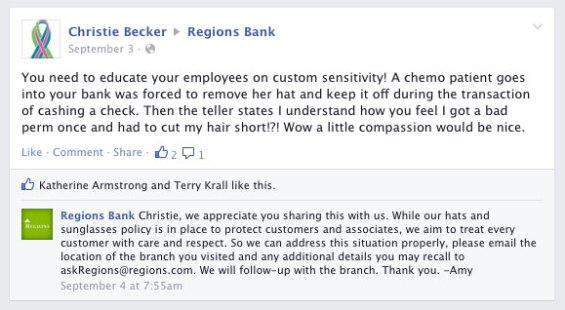 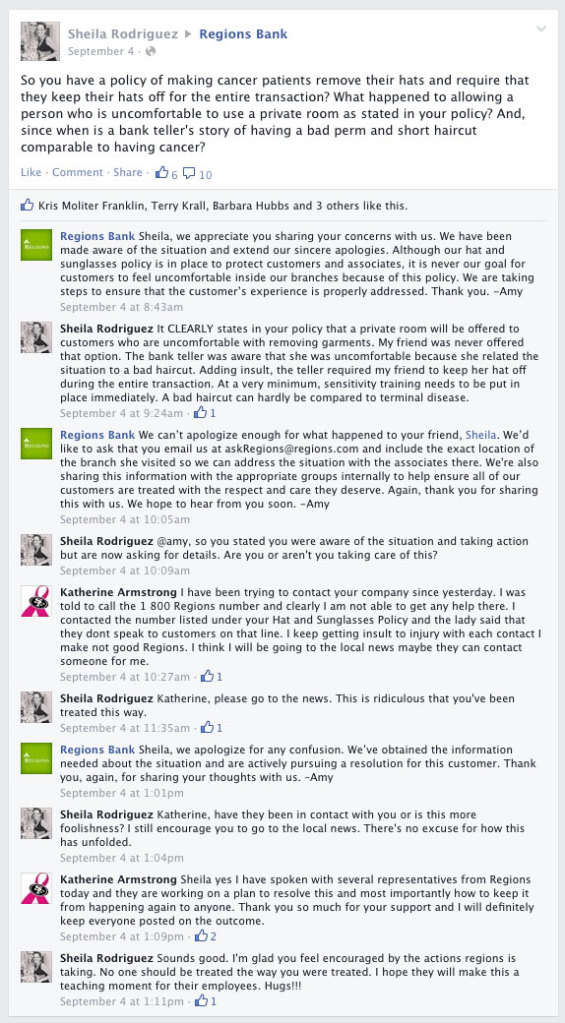