In early 2012, Pinterest swept across the financial industry with a wave of hype. Bleeding-edge social media zealots pressured banks and credit unions to hop on the bandwagon. But one year later, has anyone capitalized on the promise of Pinterest? No.

Pinterest is a pinboard-style photo sharing website that allows users to create theme-based image collections around their interests and hobbies. Users can browse other people’s pinboards for inspiration, “liking” photos or “re-pinning” images to their own collections.

Let’s roll back to January 2012. Articles about Pinterest in banking started popping up all over the place. Social media consultants and analysts, smitten with the popular picture-pinning service, published essays encouraging banks and credit unions to jump on board. By April, the trade media’s interest in Pinterest had escalated to a full-fledged feeding frenzy.

Finextra said that banks needed to get their heads around Pinterest, and — like it or not — that the new social channel really deserved their attention. “Banks should probably use the site,” Finextra noted. American Banker ran an article titled “7 Ways Banks Can Use Pinterest.” Corporate Insight went so far as to publish an 18-page report touting best practices for financial marketers on Pinterest. Bank Innovation offered tempered enthusiasm in “3 Reasons Why Pinterest Could Be Huge for Banking,” and a companion piece, “Why Pinterest Should Matter to Banks.”

“Should banks and credit unions show interest in Pinterest? The answer is clearly: No, not today.”
— The Financial Brand
February 22, 2012

At the time, Pinterest was adding millions of new users. It had become the new darling in the social media world. The site was growing fast, and yes, it boasts tasty demographics — college educated, higher incomes, and a huge following among women (a favorite target audience with bank marketers).

But despite all the pressure to participate in Pinterest, financial marketers remained wary. Back in February 2012, Ed Terpening, the wise sage heading up social media for Wells Fargo, said he would take a wait-and-see attitude towards Pinterest.

“Our resources are thin!” Terpening exclaimed. “Will the flood of new social sites cease?”

Wells Fargo still hasn’t done anything with its Pinterest account. As it turns out, Terpening’s decision to hold off was a good one.

When The Financial Brand decided to assess Pinterest adoption in the banking sector, the goal was to look at 100 banks and credit unions and see how they are doing. But we figured, why stop at just 100? Let’s study them all… 115 of them. Yep, that’s right: according to Pinterest, there are only 54 banks and 61 credit unions with an activated account — in the entire English-speaking world. (“Activated” accounts have a complete profile, an avatar image, and the financial institution has performed at least one activity on Pinterest.) There were approximately another 70 placeholder accounts with no activity.

If you remove Capital One from the study, then the picture of Pinterest gets even more dim for financial institutions. *Without Capital One, the industry has a grand total of only 4,498 followers — an average of only 39 per bank and credit union.

Between the 61 credit unions on Pinterest, they have 2,305 followers total. The one with the most, Firefighters Community, has only 274. Firefighters has uploaded over 400 images. At a minimum of 10 minutes per image, that’s 67 hours. Could Firefighters have accomplished more for its 67-hour investment that attaining 274 followers on Pinterest? The answer is almost certainly “yes.” 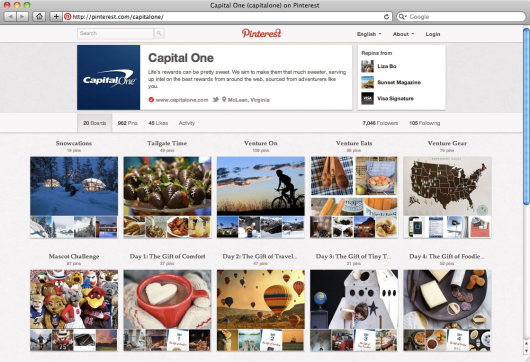 Capital One is by far the most active financial institution on Pinterest. They have accrued over 7,000 followers by pinning around 1,000 images across 20 different boards. The bulk of their activity centers around a “12 Days of Christmas” promotion.

“Yes there have been a few articles since the peak of the hype, and yes some financial institutions have made the leap,” says Gregor McKelvie. “But there hasn’t been a lot of activity.”

That’s an understatement. Very, very few financial institutions are involved in Pinterest, and even those that are aren’t really doing anything.

Indeed most business sectors have struggled to find any footing in Pinterest. Restaurants, with their ocular delights, are among the handful of industries where a small sliver of supersized brands have achieved (limited) success. Starbucks has more than 70,000 followers. Panera has over 5,000 followers, and Maggiano’s has over 4,000. But TGI Fridays only has around 1,000, as does Chilis.

For comparison, consider that the top 10 pinners on Pinterest each have at least 4.7 million followers. The top pinner has over 11 million.

Augie Ray, Director of Social Media for Prudential Financial looked at how his peers have performed on Pinterest, and he is wholly unimpressed.

“Few — if any — case studies demonstrate Pinterest is a match for the goals of financial services brands,” Ray points out.

Citi, for instance, tried using Pinterest for job recruitment, but that didn’t work and they shut their account down.

Ray points to social media power brands like AmEx and USAA as evidence of Pinterest’s failure in the financial industry. AmEx has millions and millions of fans on Facebook, but have only managed to scrape together 370 followers on Pinterest.

“If I had to guess the financial services brand that would make Pinterest work, it would be AmEx,” Ray says. “Even terrific visual content such as this infographic on the importance of small business to our economy has earned just three repins and one like.”

Before joining Prudential, Ray helped lead social media for USAA. “We began experimenting with Pinterest,” he explains. “The goal was to share evocative images that conveyed USAA’s spirit and commitment of the military.” Despite posting really gorgeous photos, the USAA account only has a few hundred followers.

And remember, for every one financial institution experimenting with Pinterest, there’s at least another 10 that thought hard about how they might make it work before giving up.

Augie Ray also noticed how, a year or so ago, consultants launched a wave of blog posts and presentations championing the power of Pinterest for banks and credit unions. “A year or so later, those optimistic predictions have been largely unrealized,” he concludes. “It is not proving to be the ‘next big thing’ for financial services.”

One look at the top uses for Pinterest and you’ll quickly realize this is forum for hobbies and interests — not somewhere users are eager to engage around life’s tedium (e.g., banking). The most popular images on Pinterest are related to (in order) food and drink, DIY/crafts, home decor, hair and beauty, women’s fashion, weddings, holidays and travel. People on Pinterest want to think about ways to spend money, not manage it.

Zachary Ehrlich at MyBankTracker.com is undiplomatic in his assessment. “Banks and Pinterest go together like lamb and tuna fish,” he says. “Where is there space on Pinterest for banks to promote intangible products like a checking account or even a credit card? The opportunity for banks on Pinterest is limited at best.”

“With the media interest and the number of consumers flocking to Pinterest.com, your bank may be tempted to join,” notes Gartner analyst Stessa Cohen. “Most banks should resist this temptation.”

Let’s just go ahead and say “all.”