Reflecting a deep commitment to social channels, NAB has moved its team of seven into a fancy new command center loaded with the latest tools and tech.

The NAB Social Media Command Centre in the bank’s Melbourne HQ is engineered to help the bank monitor and manage social network interactions with customers.

“It’s a very visual room,” says Sam Plowman, NAB Executive GM/Direct Banking. “It tells us immediately what’s happening in the social space. We can absolutely get the pulse of the market.” 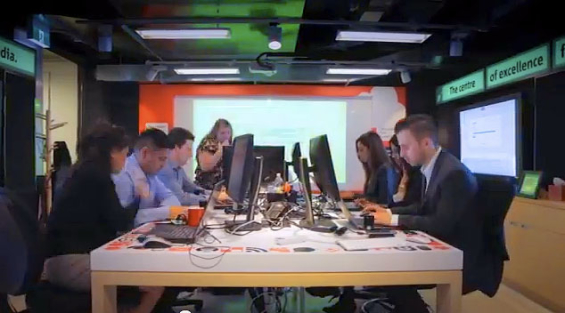 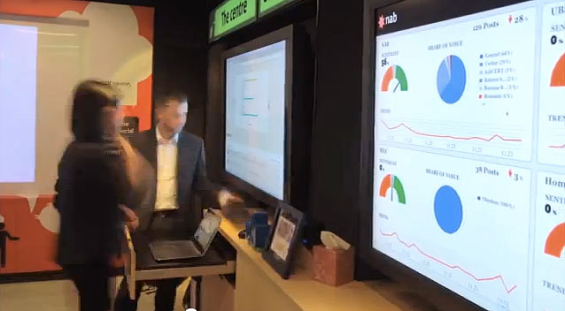 The backbone of NAB’s “visual social media toolset” is built around the Salesforce Marketing Cloud and Intel technology. Plowman says this allows the bank’s social media team to be both reactive and proactive in terms of responding to customer comments and complaints.

NAB says the new social media command center will allow the bank to respond to customers and provide help quicker and more effectively.

“It’s a great way for us to stay in touch with what’s been said positively about our organization, but also what’s been negatively said. When we hear the negative, we can address it,” Plowman explains.

Plowman believes that having a dedicated space will help NAB keep pushing its social media activities in new directions. It would, he said, also act as a magnet for other parts of the bank, demonstrating the potential of social media, which might encourage them to start their own projects in this area.

Plowman believes “social is an absolute must do” for banks like NAB.

“We’re a bank that’s been around 150-160 years. We plan to be around for a lot longer, and social is going to play a very key part in that.”

Financial institutions can’t eliminate any existing delivery channels. All they can do is add — more, more, more. ATMs, call centers and now social media — all critical channels for today’s big banks, and they can’t be taken away. Branches? They’re here to stay too. Even Plowman, NAB’s chief digital warrior, seems to accept that.

“We want to improve the experience our customers have whether they call us, tweet us, or visit us in store,” Plowman said.

Indeed NAB is living in a true multi-channel world, and there’s no turning back now.

NAB’s seven-person social media team includes employees from three different departments: Digital, Marketing, and Corporate Affairs. NAB empowers each team member to speak to customers in the same way as they would over the phone or face-to-face, effectively turning them adjunct extensions of the customer support team. They are essentially one part social CRM/service rep, and one part social media marketing manager.

NAB will be extending the social media CRM team’s hours of operation, from 9:00 am to 5.30 pm weekdays, to 8:00 am to 8:00 pm seven days a week starting December 15. NAB says the new schedule is timed to provide more help to customers in the lead-up to Christmas.

“Our customers don’t switch off on weekends, and now neither do we,” Plowman explains.

NAB says it will only be running the extended hours on a trial basis, but that’s probably just to play it safe. They probably have every intention of keep the new schedule in place permanently, but if they change their mind they’ve left themselves an out. 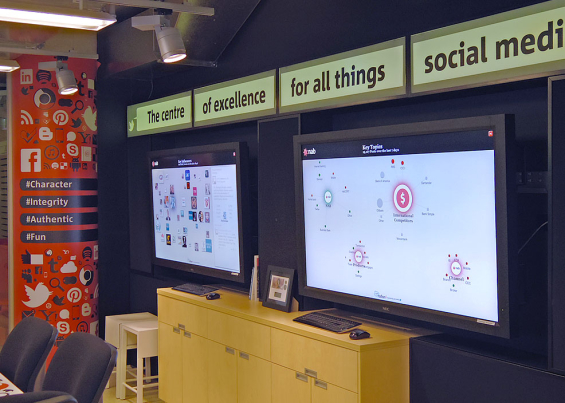 NAB is one of the first banks to dive into social media — not just in Australia, but anywhere. They created their YouTube account in 2005. That was seven years ago, so obviously NAB has been around the social media block a few times since then. Since then, NAB has garnered more video views on YouTube than the other three Aussie big banks combined… 2.5x over. They also have more followers on Twitter — over a thousand more than Westpac.

NAB is topped in only one social channel: number of Facebook ‘Likes.’ Commonwealth has the most with 236,124 vs. NAB with 86,983. Still not bad at all (that’s about 85,000 more than most financial institutions). NAB runs a number of promotions on its Facebook page, including plenty for its products and services. If you’re one of those who believes social media can’t be used for selling, take a look at NAB’s page and think again.

Here’s an overview of the big four Australian banks and how their social media stats stack up.

One of the key ingredients to NAB’s social media success has been its persistent use of offline guerilla marketing tactics. The Aussie bank is one of the best guerilla marketers in the financial industry. Consumers are suckers for crazy stunts, and love sharing such stories on social channels. Every trick NAB pulls just draws more attention to the bank’s social media accounts, helping the bank build followers much faster than most other banks.