Technophiles across the internet have made much hullabaloo about Google+, a new social sharing service intended to compete with platforms like Twitter and Facebook. The main components of Google+ include:

Companies that wish to participate in Google+ can create a “page,” much like a Facebook page but only much simpler. Google users can then +1 the page to express their approval, and/or opt to follow along with any updates the company may post.

While the usual army of social media zealots are abuzz over the rollout of Google+, there are more skeptics making noise than you usually see with new online tools. Not everyone is convinced the world needs yet another social media sharing service.

“We don’t have to jump onto every new network that comes out, exclaiming ‘No, No, NO! THIS ONE changes everything!’” wrote Daniel Agee in response to the hype surrounding Google+.

Some go further an say the service is already doomed.

While the debate over the significance of Google+ rages on, some banks have already rushed out to create pages, including BofA, NAB and ASB. (Tip to those launching Google+ pages: here’s a way to replace those hideously cryptic URLs with something more branded and attractive.) 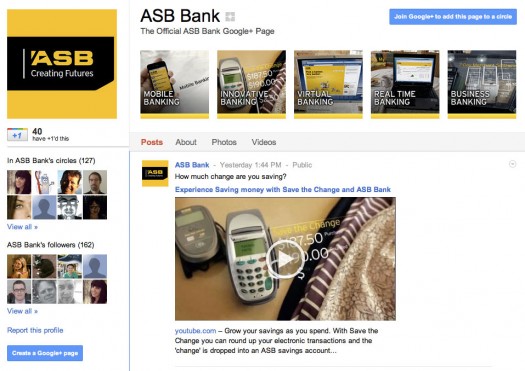 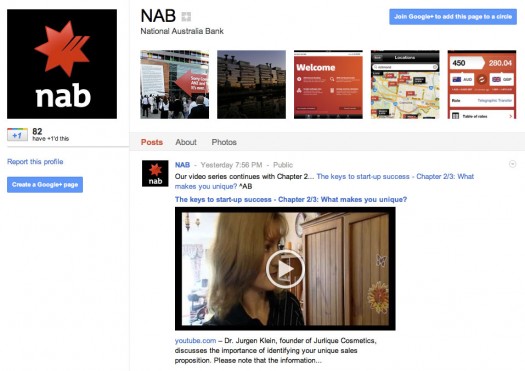 A handful of financial institutions want to cultivate a reputation for being on the forefront of social media, so they are willing to experiment with pretty much anything that comes along. But what about everyone else? Do all the other retail banks and credit unions need to hop on the bandwagon and create Google+ pages too? Is Google+ a game changer? It doesn’t seem like it. At least not for now.

With each new social media tool that comes along, there are those who rush to label whatever it is a “complete and utter game changer.” Within two weeks of Google+’s release, social media mega-man Chris Brogan started writing a book titled “Google+ for Business: How Google’s Social Network Changes Everything.” Seriously?? With so much hyperbole surrounding the debut of every single development in social media, how can financial marketers discern the difference between an innovation they absolutely must embrace, those that might possibly be helpful, and those they can pass over (at least for the time being)?

If every financial institution took the advice of every social media expert out there, they’d have a Twitter account, Facebook page, YouTube channel, blog, LinkedIn presence, Foursquare connection …and now a Google+ page? Where does it end? It’s as if social media consultants believe that their clients’ time, staff and budgets are limitless. You can’t argue that setting up and managing a Google+ presence “only takes a few minutes,” because all this social media stuff “only take a few minutes” that — by the end of each week — adds up to quite a few hours. If you’re active in social media, you’re already well on your way to one full-time employee, and maybe two or three. For what, exactly? And now social media gurus expect companies to double-down? Adding yet another channel? And another? Until hopefully someday that elusive ROI thingy kicks in?

The Financial Brand’s advice? Wait and see if Google+ gains any steam and reaches critical mass. You won’t be missing much by holding off for a while, nor is there much to gain by jumping on board early — just a little knowledge about what works… or more likely, what doesn’t.