Geolocation is one of the hottest topics in the technology industry today, and holds promise for financial institutions. Generally speaking, geolocation uses GPS-capable mobile phones to increase users’ level of information and interactivity at a hyper-local level. It’s easy to envision some potential uses for geolocation in the financial industry. For starters, consumers are already using their GPS phones to find ATMs and branches.

And now there is Foursquare.

Foursquare is a game for GPS mobile phones. It enables iPhone, Blackberry and Android users to log visits they make to their favorite locations, most often places like bars, restaurants, coffee shops, cafes and nightclubs. You can get the general idea of how Foursquare works from this short instructional video:

FOURSQUARE OVERVIEW
You can also get a basic idea about Foursquare by simply visiting the company’s homepage and watching the updates scroll along.

If you check in to the same location more than any other user, Foursquare declares you the mayor of that place. What does that mean? Some bars may give their mayors a free drink, but being the mayor at most places isn’t good for much more than bragging rights.

Theoretically, any user checking in to a location should be able to see tips, advice or reviews from other Foursquare users about that place. “Tuesdays are the hot nights here!” “Order the Reuben. It’s the best in town.” “This airport has no place to smoke…at all.” Of course, this requires other users actually enter tips and advice, which isn’t the case for essentially every bank and credit union on Foursquare so far. 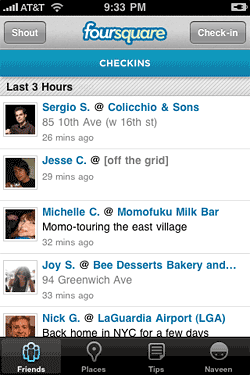 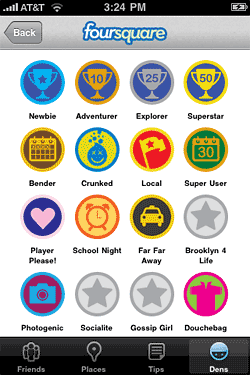 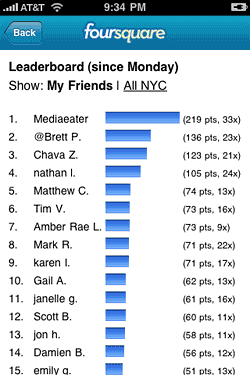 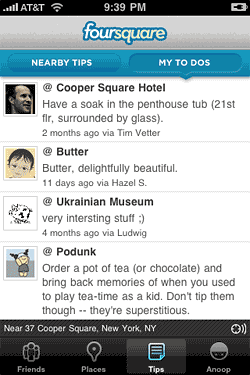 TDECU in Texas is excited about the possibilities for rewarding their members through Foursquare. For the grand opening of its latest branch, TDECU is offering a $250 Visa Gift Card to the Foursquare mayor if they show up at the ribbon-cutting event.

North Shore Bank, one of the more progressive financial institutions on the social web, offered a $5 Subway gift card to anyone who became the mayor of one of the bank’s branch locations.

Steven Kruskamp, E-Commerce Marketing Manager at 1st Mariner Bank, has just started experimenting with Foursquare. “I’ve uploaded all of our branches to Foursquare and am in the process of adding Foursquare links to the Branches page on our website,” said Kruskamp in an interview with The Financial Brand. “I’m working on figuring out a way to reward and encourage mayorships of branches with our customers.”

“The biggest hurdle for me right now is educating the branches themselves,” he added.

The Trouble With Foursquare Mayors

Building a Foursquare promotion around the mayors of your locations may feel like the easiest and most obvious way to tap this social media platform, but it is probably the worst thing you can do. For starters, it really limits the promotion’s audience. There can be only one mayor at a time and there will likely never be more than 2-3 people who could possibly ever overtake him/her. So if you have five branches, a mayor-based promotion would mean something to only around 15 people. For many mayors, a Foursquare promotion may simply be a reward for something they’d do anyway, e.g., using your branches a lot.

Key Question: Will a Foursquare user visit your branches more often than they usually might because you have a promotion? And is that what you really want?

Most financial institutions are trying to push people out of branches — especially for routine interactions — by encouraging use of self-service channels. But a Foursquare promotion encourages exactly the opposite: frequent branch visits. If your financial institution builds a Foursquare promotion around mayors, you will be taking those who are highly wired, leading-edge, early adopter tech junkies and encouraging them to come into branches more often than they should. You’d think those with GPS iPhones using Foursquare would be the first people you can get to go completely branchless, but Foursquare does completely the opposite: it reinforces branch-centered behaviors.

Reality Check: Repeat traffic is the lifeblood of bars, restaurants and retailers, not banks.

Every time a retailer gets someone in one of their locations, they have a better-than-fair chance of making a sale. Every consumer who steps foot on the premises equates to more revenues. This isn’t the case with financial institutions. Home loans aren’t an impulse purchase. Many Foursquare users are only checking in to bank branch locations to conduct routine transactions.

Key Question: For the last 10 years, hasn’t your financial institution’s strategy been to drive people to alternate, self-service channels unless they are coming in for high-value services such as a home loan, auto loan or investments? Does Foursquare change this?

These aren’t self-sustaining promotions. You can’t just create a Foursquare account and hope for results. Just like with any promotion (online or off), you have to let people know about it. That means good old fashioned marketing muscle, which takes time, energy and money.

The numbers are unimpressive. The Financial Brand has not seen any financial institution with more than 100 check-ins at a single branch location besides BofA. How many of your customers have GPS-capable mobile phones in your market that know about Foursquare and feel like using it every time they go to your branches?

“What are the chances that enough of your members or customers are using Foursquare to warrant any attention?” wonders Tim McAlpine, CEO of challenge marketing firm Currency. For social media marketing, concentrate on doing a few things really well rather than always jumping at the next new thing.”

People are playing a game. Foursquare is first and foremost a game. People compete to see how many badges they can accrue and how many mayorships they can attain. Others simply enjoy the sense of accomplishment when they earn a new badge. But when it comes to Foursquare check ins for your financial institution, don’t confuse users’ motivations. People may check in to your branches, but they are more likely shooting for a new Foursquare badge than they are interested in announcing their love for your brand. When they check in to their favorite bar, they may do so with pride. When they check in to a bank branch, they are probably shooting for an easy mayorship so they can earn something like the “Super Mayor” badge (a mayor at 10 different locations).

What else is Foursquare good for?

If the concept of mayors runs opposite to today’s prevalent business strategy, are there other alternatives for a financial Foursquare promotion? Perhaps.

Whatever you do, send your customers/members anywhere where they’d rather be than your branches.

We’ve seen this narrative play out in one social media space after another. First it was MySpace, then Second Life. There have been a few financial institutions who have found success with YouTube and Twitter, but not most. For most banks and credit unions, the only social media platform that has both potential and staying power right now is Facebook.

“Your customers or members have barely heard of Twitter and it just turned four years old,” notes McAlpine.

“We as ADD-riddled marketers — myself included — are drawn to the next shiny thing,” McAlpine adds. “Location-based services like Foursquare, Gowalla and Brightkite may be all the rage in tech circles, but don’t get distracted by the hype.”

Bottom Line: Lots of hype does not equate to lots of opportunity. There may be a lot of chatter about Foursquare among thought leaders, innovators and other progressives in the financial industry right now, but that doesn’t mean you should drop what you’re doing and start toying around with Foursquare today. There’s no harm in experimenting with a Foursquare account for yourself, and/or setting up profiles for your organization’s branch locations. But there’s no pressing or immediate need to go any further with it.