The State of Social Media in Credit Unions: Opportunities and Challenges is the front end of a yearlong longitudinal study examining the extent of social media usage among credit unions and the common practices that drive social media success.

The study, conducted for Filene by Crescendo Consulting Group, study included 187 credit unions of varying size and composition across the US and Canada.

The study involves two phases. In the first part of the study, respondents were allowed to self-assess their levels of success with social media. Then in 2012, researchers will correlate the study with observable changes (asset growth, increased share of wallet, increased membership, etc.) to gauge the tangible impact of social media.

The full report is available at Filene and is free for members, and for purchase at $125. It is packed with 61 pages of insights and interesting data. If you can get your hands on a copy, it’s definitely worth it.

Within the research and its revelations are some troubling signs and statistics. Summary: if you have no strategy, no budget, no staff and no time to applied to social media, you’re aren’t going to find any success. Go figure… 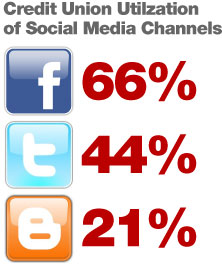 Finding: 75.7% of credit unions use social media. Of those, 72% utilize more than one channel.

66% use Facebook. 44% use Twitter. 21% have a blog. These numbers reflect a significant uptick in social media adoption. Back in 2010, only eight months ago, The Financial Brand conducted a similar study that put Facebook utilization at 46% and Twitter at 35%, a increase of +20% and +9% respectively. The rapid rate with which social media has taken off is startling, especially when you consider the significant questions surrounding how to define social media success and its ROI.

Finding: 56.8% of those not engaged in social media intend to do so within the next year.

That means that by April 2012, 90% of credit unions will be doing something with social media. Never before has anything with such fuzzy metrics and vague strategies been adopted so quickly by financial marketers.

Finding: 30% had a social media strategy prior to launch.

70% didn’t have a strategy. What did they do? Hop on the bandwagon and cross their fingers?

That means 62% don’t tie their social media activities to the organization’s goals. What, then, are they trying to achieve with social media? What yardstick are they using to define success? You’ve probably heard the expression, “If it isn’t measured, it doesn’t matter.” A study by The Financial Brand found that one in five financial institutions don’t track their online marketing efforts. 43% do it “sometimes.”

Finding: 61.5% describe their social media activities as “neither successful nor unsuccessful.”

Finding: 51% have no budget allocated for social media.

And they wonder why they don’t have more success?

Finding: 13.5% began their social media program within three months of taking the survey.

“If social media is a waste of time for many banks and credit unions,” says Aite Senior Analyst Ron Shevlin on his blog. “it’s partially because many don’t know what they’re doing.”

In one of Shevlin’s studies for Aite, he found that six in ten consider themselves to be novices or beginners at social media.

His takeaway: “It takes time and experience to figure out what works and what doesn’t.”

For starters, this level of investment isn’t going to yield the experience needed to figure out what works and what doesn’t.

Two hours a week isn’t going to accomplish squat. As The Financial Brand noted back in 2010, if you’re going to take social media seriously, you probably need a new, full-time position. You can’t just put a few hours a week into social media and expect any kind of success. Just like with anything else, you get out of it what you put into it. 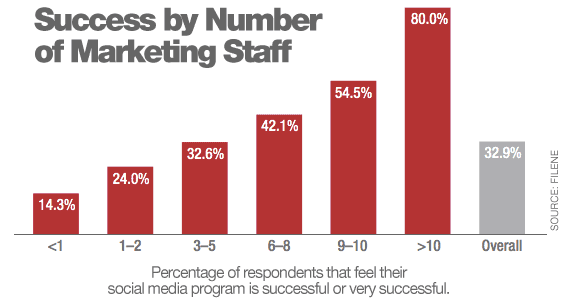 One of the biggest mistakes financial institutions make with the launch of their social media initiatives is to underestimate the amount of time it takes. Social media managers are expected to write blog posts, moderate comments, send tweets, publish Facebook updates, create YouTube videos, add blog subscribers, grow Facebook fans, build Twitter followers, coordinate contests and somehow accomplish all this with no budget. All that simply isn’t going to happen with a nominal investment of time.

Finding: Credit unions with more than 10 employees in the marketing department are by far the most likely to report successful programs.

Credit unions with 10+ employees in the marketing department have an easier time finding 8+ hours they can apply towards social media.

Finding: 39.1% say that they are “very likely” to add additional social media channels in the next three months.

No one is really sure how well social media is working, but two-fifths of credit unions plan to do more of it.