In early 2012, Fifth Third Bank piloted a service designed to help to its unemployed mortgage customers find a job. These were people who genuinely wanted to work, but were struggling to keep up with their payments and were at risk of default. Banks in similar situations would typically either choose to modify the loan or foreclose.

But Fifth Third wanted to try a different route. So they partnered with NextJob, a national reemployment company. Together, Fifth Third and NextJob provided job search assistance, one-on-one coaching, webinars and job search software, all paid for and provided by Fifth Third.

According to the bank, the participants had been out of work for an average of 22 months. But through the reemployment program, nearly 40% were back to work within six months.

Based on its initial success, Fifth Third chose to continue the initiative. Fast-forward to 2014. The bank has taken its focus on jobs to a whole new level, and now a offers a free, online Job Seeker’s Toolkit to all of its customers.

Maria Veltre, SVP/CMO at Fifth Third, said the program has evolved from where it started — asking how to help unemployed people keep their homes —to the broader question: How do we get people in general back to work?

Still in partnership with NextJob, Veltre brought in the bank’s ad agency, Leo Burnett, to launch a campaign in May 2014 revolving around Fifth Third customers who seeking jobs, people like Randall Jackson, Katrina Holmes, Elba Pena and Bill Laakkonen, all of whom had been out of work for quite some time. Fifth Third leveraged its digital and radio advertising media to help connect these job seekers with prospective employers.

The initiative is supported by a microsite, 53.reemploy.com, where you can “Meet the Job Seekers.” The site provides interactive profiles for the three job seekers showcased including videos that provide background on each candidate, links to LinkedIn profiles that allow peers and prospective employers to connect with the seekers and view their professional experience, infographics that visually bring to life career/skill endorsements from LinkedIn, and professional recommendations that put the job seekers’ credibility and capabilities front and center. 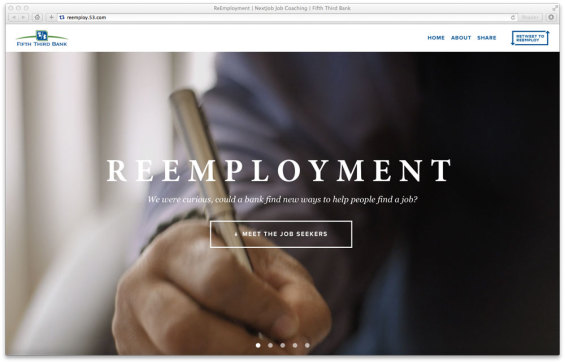 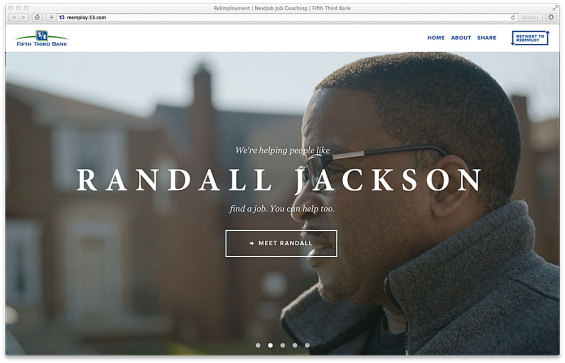 The campaign prominently features Randall Jackson, a Fifth Third customer who, after long-term unemployment, was assisted through the Bank’s effort with NextJob and found work. The bank touts Randall’s story via its social platforms as a way to “inspire other job seekers.”

To give the candidates even more exposure, the bank also encouraged the public to use social media to spread the word about the program’s participating job seekers. “Retweet to Remploy” was the anthem on Twitter. For every 53 retweets, Fifth Third funded a job search coaching package for another unemployed person. Clever.

And the public seemed to respond. One tweet triggered 524 retweets and 306 favorites. Facebook posts were liked, commented on and widely shared, with one yielding 3,380 ‘Likes’ and 374 shares. Posts on both Twitter and Facebook drove to the candidates’ videos hosted on YouTube, each garnering tens of thousands of views. 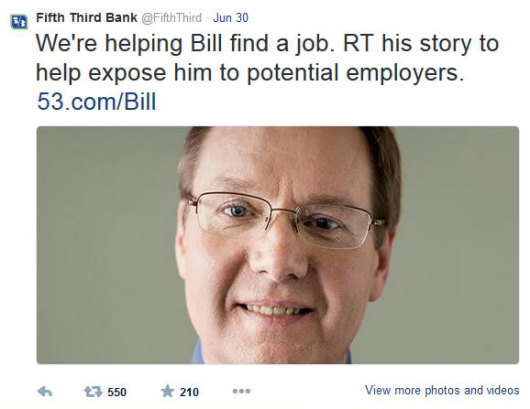 This 30-second YouTube video introduces one of the bank’s customers, Katrina Holmes. She has 18 years experience, a bachelors degree in psychology, and an MBA in health care management. The video has been viewed over 50,000 times. 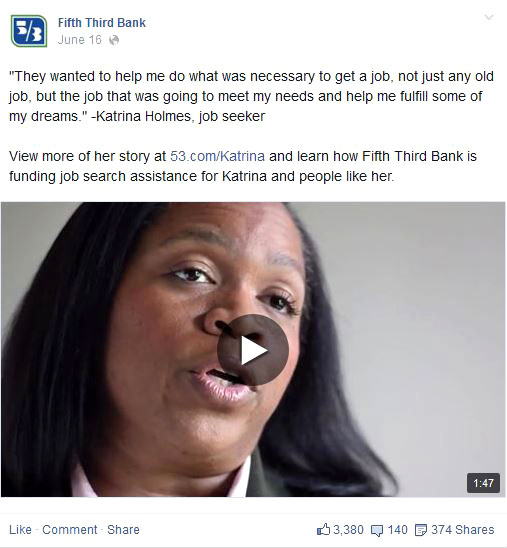 While engagement with the overall campaign has been strong (as evidenced by the numbers of likes, shares, retweets and views), the tone of direct consumer feedback was not always positive. There was a fair amount of encouraging and compassionate comments, for certain. Unfortunately for Fifth Third, some consumers hijacked posts about the jobs program to vent unrelated complaints. That’s just part of the unavoidable risk financial institutions face when they put themselves out on social channels: they open themselves up to raw, two-way public dialogue. Kudos to Fifth Third for leaving the critical comments up. That’s the kind unfettered, honest environment that online consumers want, and it earns the bank some authentic social cred.

Across three of Fifth Third’s primary social platforms, there has been a significant spike in activity — easily traced back to the bank’s jobs program. Looking at The Financial Brand’s Power 100 second quarter rankings, to identify possible movers and shakers and found a single standout: Fifth Third Bank. They made a significant jump in the rankings, leaping 20 spots. Among U.S. banks, that puts Fifth Third at #12.

Here is a summary of Fifth Third Social Media Snapshot for Q2 2014: