Gearing up for the summer car-buying season, Air Force Federal Credit Union has rolled out a social media strategy to promote auto loan rates as low as 1.49%, the lowest rate offered in the state of Texas.

As a creative way to inform borrowers of the competitive rate, which officially dropped April 15, Air Force FCU encourages folks to use the hashtag #FavoriteCar on social media to personalize and share their car experiences. The credit union is using both its Twitter and Facebook accounts to get the word out about the promotion.

What distinguishes this social media promotion from others in the banking industry is its simplicity. Air Force FCU has designed a social campaign relevant to the auto loan product that engages the audience in a fun way with nothing more than a hashtag. 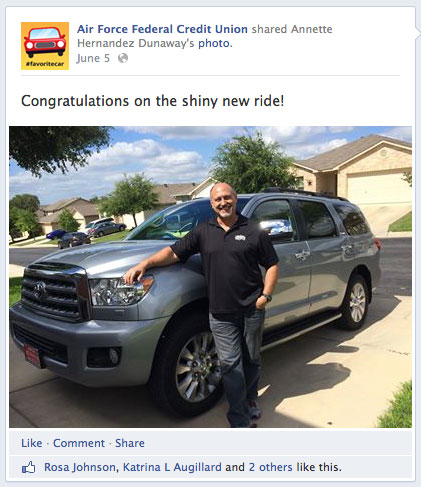 As people take advantage of Air Force FCU’s super low auto loan rates, the credit union has been posting photos of members alongside their new cars on its corporate Facebook page.

Air Force FCU is offering auto loans with up to 100% financing on both new and used cars.

Air Force FCU is among the growing number of institutions that has recognized the importance of a strong digital presence. Air Force FCU is making some aggressive marketing moves, with the best auto loan rate in its state, an intuitive online application process, and a creative and engaging social media campaign.

“Cars are more than just a mode of transportation,” notes Danny Sanchez, VP/Marketing at Air Force FCU. “Our cars become a part of our lives. The #FavoriteCar campaign lets our members share what makes their cars special. It makes the transaction a human one.”