Thousands of banks and credit unions are on Facebook. But who’s listening? What’s being said by- and about financial institutions on their Facebook pages? Social Assurance crunches the data behind the conversations in one of the most exhaustive Facebook studies ever conducted — a fascinating analysis of dialogue between consumers and financial institutions.

By Ben Pankonin, CEO and co-founder of Social Assurance

Social Assurance has been busy archiving and tracking data from over 3,000 bank and credit union Facebook pages in the last quarter. During that period (July 1 – September 30), we recorded a whopping 1.9 million interactions between these financial institutions and the consumers they target.

What does this data reveal? Here’s what we found.

The majority of comments Facebook users sent to their financial institution during that period were overwhelmingly positive, and smaller institutions generally have slightly fewer negative comments per capita.

Now smaller institutions might be tempted to rush out and use this data to suggest that their customers are “far happier,” let’s consider a couple hypotheses about why this might be the case.

First, smaller institutions are less likely to fall victim to “mob” or “crowd-psychology”. Negative comments beget more negative comments; when visitors to a page see more comments — particularly negative ones — they are more likely to chime in with their own grievance(s). 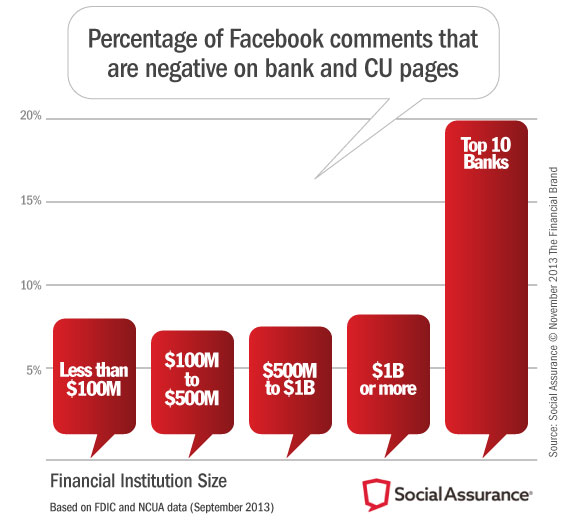 Now the graph above may seem to paint a rather bleak picture for big banks. But don’t despair: social media has proven itself as an effective outlet to respond to consumer issues, giving you opportunities to flip those customers into evangelists. The amount of investment the largest ten banks are making in social indicates the value they see in not only promoting products, but also responding to customer service inquiries.

It’s no surprise that smaller institutions have a higher positive sentiment ratings for their Facebook page activity. For starters, smaller institutions can leverage Facebook by posting about community events. This is a big disadvantage for larger institutions that struggle speaking specifically to local communities when their footprint canvasses large swathes of the country.

Additionally, institutions with less than $100 million in assets will always yield a higher standard deviation of results in any study, reflected in wildly divergent negativity scores.

Many financial marketers want to know what is being said by their competition and if they market any products using Facebook what are they marketing. Below is a topical extraction of the most promoted (posted by Institutions) and most commented about products.

Sentiment scores can gauge the level of negativity or positivity within conversations on bank and credit union Facebook pages. In the real world we would refer to the level of negativity or positivity as “emotion” — feelings. Banking is indeed an emotional activity — the heated subject of money is at its root — so any net positivity on Facebook serves as a strong indicator of a happy, satisfied customer base. Net negativity scores tend to suggest the organization’s service experience is lacking. Or something at a more fundamental level: that their products, services or features are disappointing.

( Read More: 15 of the Best Facebook Pages in Banking to Watch )

What We Can Learn

There is an infinite number of ways to measure success in social media: sentiment analysis, response times, engagement, followers, and other factors can all play a part. But now is the time for banks and credit unions to begin correlating their Facebook activity with customer information, and helping to identify the interactions that can benefit — or harm — their institution.