[Note: You should definitely check out 8 Things You May Be Doing to Get Your Financial Institution’s Facebook Page Shut Down before reading this article.]

Most financial institutions struggle to accrue a significant Facebook fan base. But there is one way that nearly every bank or credit union can build the number of Facebook likes they get: giveaways. Sweepstakes and other similar raffle-style contests have proven one of the most consistently effective ways financial firms on Facebook have achieved sizeable fan growth.

Financial Facebook promotions most commonly involve one of two giveaways: cash — as always — is king, followed by consumer electronics, primarily iPads. If you’re looking for a general rule of thumb, plan on giving away something worth at least $1 per fan you wish to add. That means if you want to add 250 fans, you’ll need an item with a cash value of at least $250. One financial institution gives away $50 for every 50 new fans, another holds a drawing for $100 every 100 new likes it receives. An iPad is worth around $500, so you should plan a promotion around 500 new fans. 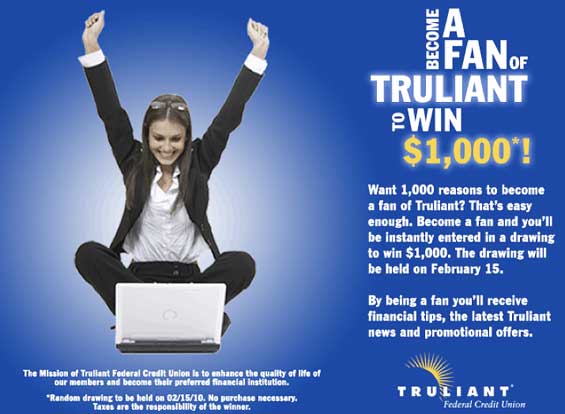 Mountain America Credit Union $1,000 Sweepstakes
Giveaway: Like the credit union on Facebook for an entry into a drawing with five $100 prizes and one $1,000 grand prize. You can get three extra entries for mentioning the contest on your wall, plus additional entries for inviting friends to participate.
Total Likes: 5,873
Comment: The entry form is an application powered by GroSocial, a third-party Facebook promo company. 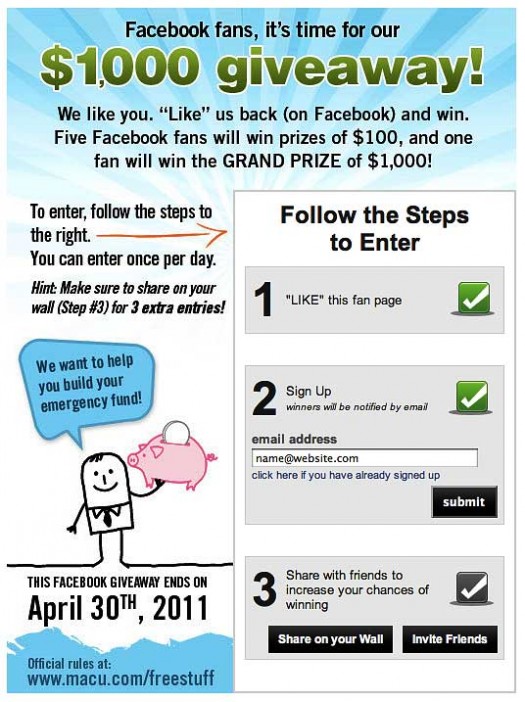 First United Bank & Trust 1,000 Fan Promotion
Giveaway: $1,000 to one of 1,000 fans
Total Likes: 731
Comment: Merely “liking” the bank on Facebook isn’t enough to qualify. You have to go to the bank’s blog and fill out a 10-part entry form. (Note: Each extra step entrants are required to complete will translate into exponentially fewer entries.)

Fairwinds Credit Union Facebook Fan Sweepstakes
Giveaway: One $100 Visa gift card to be given away when the credit union reached 4,000 Facebook fans.
Total Likes: 4,794
Comments: The credit union launched the promo when it was only 89 fans shy of 4,000. Building a contest around obtaining a fixed number of fans helps create excitement and fuels anticipation. It gives entrants (and lawyers) a clear calculation for odds. 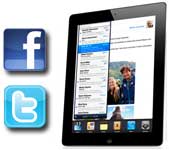 Arvest Bank 1 Million Meals
Giveaway: $1 = 5 meals donated to the hungry in exchange for every “like” on Facebook
Total Likes: 7,796
Comments: A million meals is a noble, inspired goal that will make people feel better about Arvest — and themselves –simply by clicking the bank’s “like” button. Customers can make additional cash donations by phone or by buying a $1 paper plate in the bank’s branches, where food donations are also accepted. 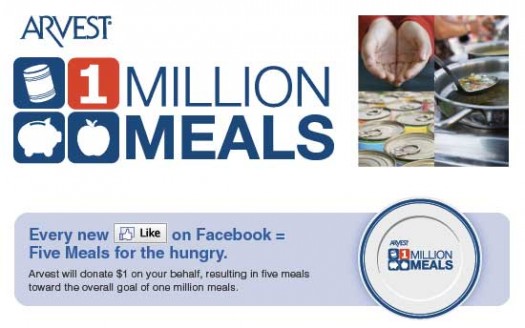 Chase Community Giving
Giveaway: $5 million to charities who got the most votes, and you had to “like” the bank in order to vote.
Total Likes: 2,436,143
Comments: This is one of the most famous examples of a corporate Facebook promotion ever, proving that the more you give away, the more interest you will generate. There’s a direct correlation: more bucks = bigger bang. Kohl’s held a similar contest, giving $10 million total to 20 schools that each received $500,000. Grassroots campaigns undertaken by schools in the contest garnered nearly 12 million votes and generated 1.5 million new likes for Kohl’s. New fans only cost Chase $2 each, whereas Kohl’s paid $6.67 each. 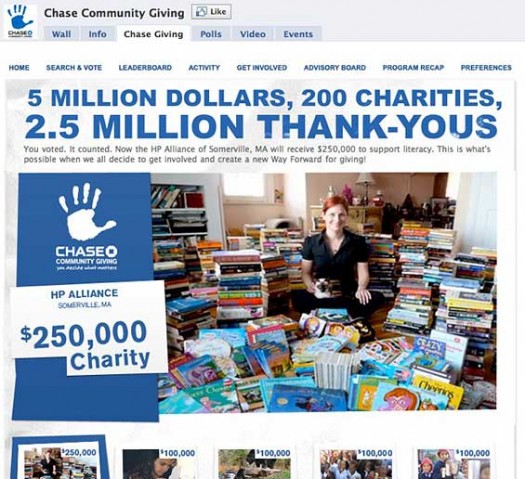 Desert Schools FCU – KNIX Fan Promotion
Giveaway: The credit union regularly gives away two tickets to local concerts and sporting events. They partnered with 102.5 KNIX, a country music station. People are entered to win if they like the credit union on Facebook or follow them on Twitter. Another way to enter is to post “I’m a KNIX fan!” on the credit union’s Facebook wall or on Twitter.
Total Likes: 468
Total Followers: 462
Comments: Giving away tickets to a local event encourages entries specifically from people within the credit union’s area of service (people aren’t likely to enter a contest if they can’t use the prize). By teaming up with a media partner for a co-promotion, the credit union at least picks up some name awareness. 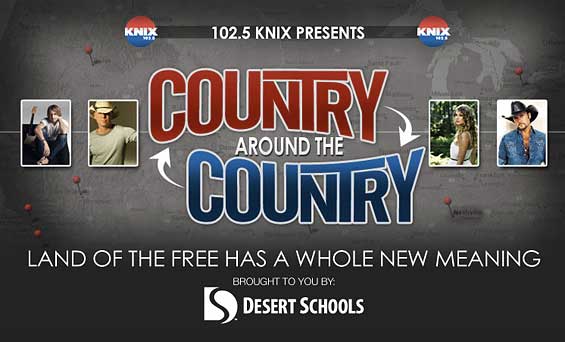 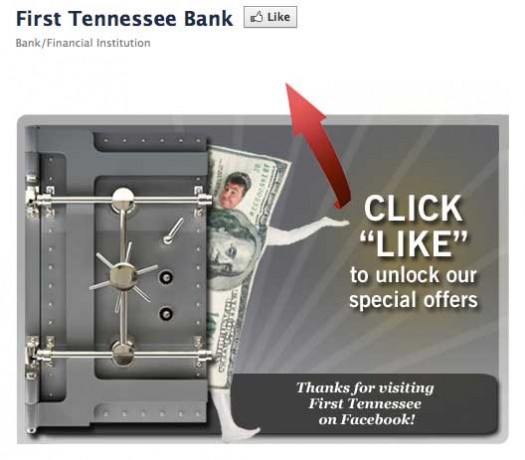 You don’t have to host a traditional contest where the only prize options are cash or iPads. For example, one random winner selected from everyone who posts a comment on the financial institution’s wall gets a dollar for every Facebook friend they have. You could give something to every new fan, like a free ice cream cone. Or offer a giveaway like a tropical vacation or Alaskan cruise… a giant TV for the kickoff of football season or a fully-catered Superbowl party… themed contests for holidays like Christmas, New Years and Valentine’s Day… a skybox at a major sporting event for the winner and 15 of their friends… a deluxe BBQ and patio set for summer…

1. Having fans doesn’t do you any good unless you’re able to capitalize on those relationships. There’s no point adding a comma to your fan count if it doesn’t help you accomplish your organization’s objectives. If you’re able to generate engagement and get fans to take action in a series of follow-up steps, then promotions focused on adding “likes” make sense.

2. Many people drawn to contests like these are only hanging around to win the thing you’re giving away. Most don’t have any genuine interest in listening to your stream of announcements, questions and polls. The number of fans may go up, but the average quality of fans will likely go down. It’s probably safe to say that fans acquired organically are worth as much as five times more than those added through giveaways.

3. Your giveaway isn’t likely to “go viral” on Facebook, so you have to back up your promotion with marketing muscle. A tweet, a press release and an ad on your homepage isn’t going to cut it.

4. If you have the marketing resources to apply to a sweepstakes-style contest, your energy might be better spent building a product-centered campaign rather than one aiming to only add fans.