Baseball slugger Adrian Gonzalez and Eastern Bank will award one lucky winner $2,500 in cash in the “Mentoring Wins” sweepstakes, which will also generate funds for five youth mentoring programs in eastern Massachusetts.

Gonzalez and Eastern Bank will together donate $5.00 per entry for the first 6,000 total sweepstakes entries received to a fund that will be distributed evenly among five local youth mentoring programs.

Gonzalez and Eastern Bank kicked off the sweepstakes with a surprise by making a combined $20,000 donation to start the fund. The sweepstakes entries could generate an additional $30,000 for a total donation of $50,000 spread evenly among the five youth mentor programs.

“I am very excited about my season-long partnership with Eastern Bank to raise awareness and funds for critical youth mentoring programs in Massachusetts,” said Gonzalez. “The ‘Mentoring Wins’ sweepstakes will benefit one lucky grand prize winner and thousands of local children in need.”

The sweepstakes, which runs July 2 to Aug. 13, is hosted on Eastern Bank’s Facebook page. The promotion is open to Massachusetts, Rhode Island and New Hampshire residents.

Eastern Bank has acquired around 8,000 ‘Likes’ since joining Facebook in July 2009. The bank’s averaging one ‘Like’ per every $1 million in assets, which is just about the norm in the retail financial industry. 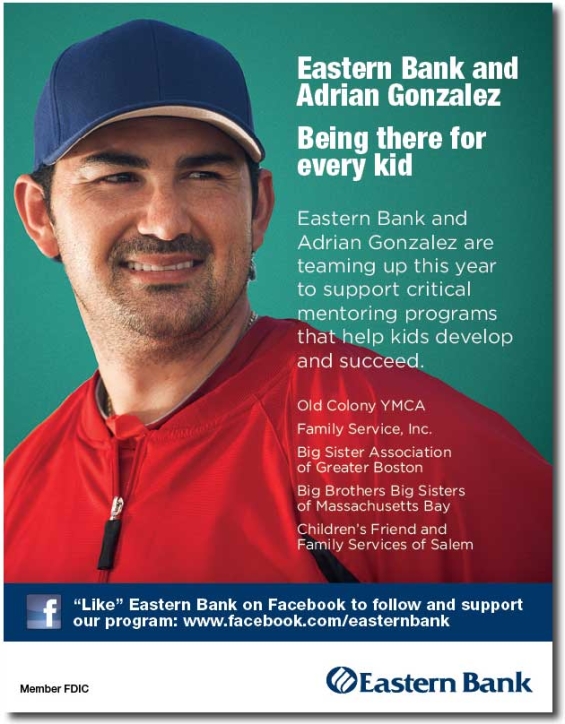 In addition to raising funds, Eastern Bank has created a webpage (www.easternbank.com/adrian) to generate awareness about the need for youth mentor volunteers.

The five organizations are also featured in a 30-second television commercial, “Being There,” which stars Gonzalez and underscores the importance of youth mentoring programs. That TV spot is now airing on local television and on the bank’s YouTube channel.

Founded in 1818 and based in Boston, Eastern Bank is the largest independent and mutually owned bank in New England, with $7.6 billion in assets and more than 90 branches serving communities from the Merrimack Valley to Cape Cod. Eastern Bank offers banking, investments and insurance all under one roof, and prides itself on working harder to understand its customers’ needs so it can deliver these services in a committed and personal way. Eastern Bank includes Eastern Wealth Management and Eastern Insurance.