People who ‘Liked’ Credit Union ONE’s Facebook page between November 18 and December 6, 2013 were presented an entry form for a special sweepstakes. Existing fans could also complete an entry form and enter to win. Anyone could submit a new, additional entry every day.

At the promotion’s conclusion, three drawings were held with a total of 19 winners selected. Prizes included gift cards to Starbucks, Kroger and Meijer stores ranging in value from $10 to $40.

This is the second year in a row that Credit Union ONE has ran this kind of fan appreciation sweepstakes, because it was “such a fan favorite last year,” says Andrea Pertile, Credit Union ONE Social Media Manager.

Read More: 15 of the Best Facebook Pages in Banking to Watch 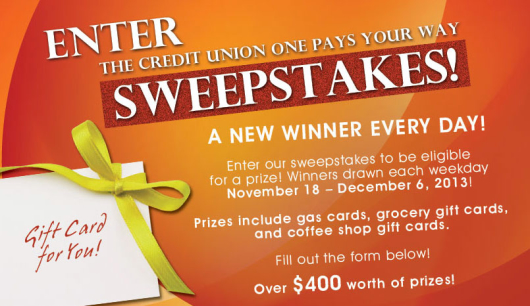 “Credit Union ONE’s goal is to engage our members by giving back,” Pertile explains. ”Whether it’s joining a discussion on an interesting topic, making our fans laugh with a joke, or brightening a fans’ day with a cup of coffee — adding value to our members’ lives is what drives us.”

Based in Michigan, Credit Union ONE ($808 million in assets) serves 108,000 members through 17 offices in three major metropolitan areas, including Metro Detroit, Grand Rapids and Traverse City.