Commonwealth Bank in Australia will be opening a vault on its Facebook page. A “Time Vault,” to be precise. Inside The Time Vault will be trivia questions related to Commonwealth’s 100-year history. Starting on Monday, November 21, and for each day over the next ten business days, the Vault will release a new question about a specific decade in the bank’s past. The promotion is part of an ongoing marketing push surrounding Commonwealth’s centennial celebration in 2011.

Players are sent on a ‘treasure hunt’ style quest to collect information, clues or codes so they may answer each question correctly. Sources of answers range from the Commonwealth’s dedicated Centenary microsite to the bank’s thousand-branch network. It’s like a treasure hunt, only it blends both online- and offline channels.

Players have just 23 hours to find the correct answer before each day’s question closes. The ten winners (one for each question in the contest) will receive a $2,000 prize. Daily winners will be randomly drawn from a pool of those players who submit the right answers.

The Time Vault, set up as a Facebook app, housed within a tab on the bank’s main corporate page. To be eligible for The Time Vault game, all players must first hit the ‘Like’ button on the contest’s tab.

Just days before The Time Vault contest kicks off, Commonwealth’s Facebook page had a total of 74,000 Likes. 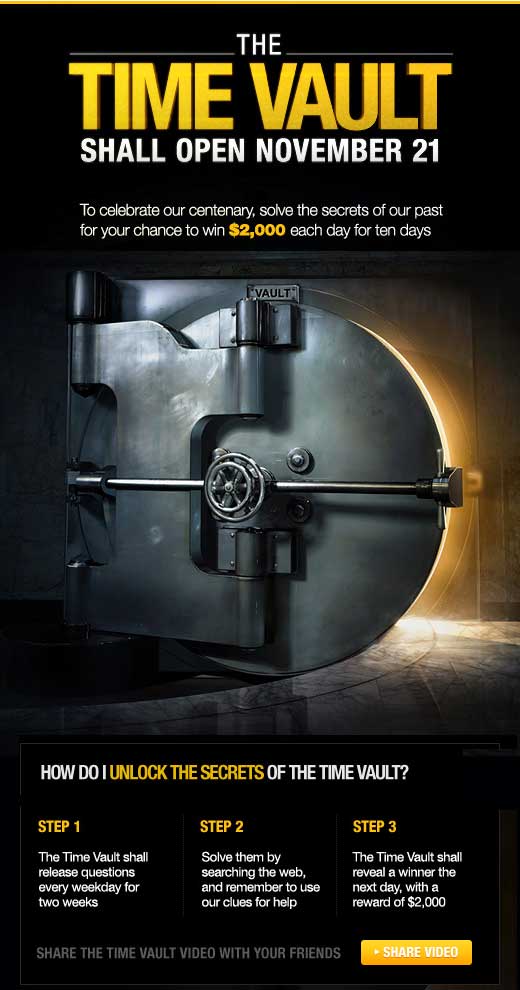 This melodramatic teaser video intrigues the audience with all the grandeur of an action movie trailer, but with few details.

“I’ve never been a huge fan of giving away money to drive ‘engagement’ and increase the size of your community on Facebook,” wrote Christophe Langlois, an authority on social media in banking, at his Visible Banking blog. “Beware of diluting the value of your fan base.”

Langlois raises an excellent point. Yes, any brand can artificially pump up the number of Likes it receives simply by handing out cold hard cash. But these “sweepstakes seekers” don’t usually engage with your brand beyond the bare minimum required to qualify for whatever prize(s) you’re giving away. At least Commonwealth has tied its promotion to something related to its brand.

Even Langlois concedes there may be some value from the way in which Commonwealth has structured its contest. “Here I guess CBA is talking about their history, and the very use of ‘vault’ puts the emphasis on money, so I can see the link,” he said.

In a previous article, The Financial Brand noted that it costs an average of $1 cash for every Like a bank or credit union wishes to add. With prize money in Commonwealth’s Time Vault promotion totaling $20,000, we’ll see if the bank can push its Like count past 100,000.