A controversial two-page social media policy Commonwealth Bank introduced to its employees back in December has turned into a public relations disaster. The document threatens “serious disciplinary action which may include termination” for a range of online activities extending far beyond office walls.

The policy forbids its employees from doing anything online that may damage the bank’s brand. Most troublesome is a section of the policy informing employees they would be held accountable for the actions of their online friends.

Commonwealth told employees that they were to report “inappropriate or disparaging content and information stored or posted by others (including non-employees) in the social media environment” or risk being fired.

“For example, your friend could post an inappropriate comment about the Group on your Facebook page or create a blog about the Group,” the policy states. “If you become aware of any such material, you should immediately notify your manager and the Media & Communications team.” 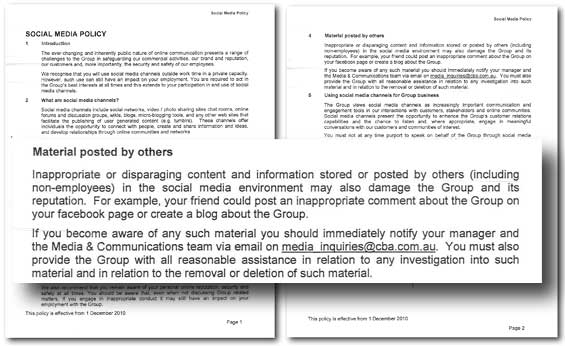 The document, which was obtained by an Australian newspaper, not only told employees they were expected to snitch on their friends, participation in any subsequent police action would also be required.

Translation: Rat on your friends, then collaborate in the resulting witch hunt.

The social media policy, which restricts what employees do and say in their time away from work, has outraged privacy and civil liberties activists. Labor union officials say the policy violates freedoms of speech and association.

The Financial Sector Union, which represents Commonwealth employees, characterizes the bank’s social media policy as unfair, suggesting that even innocent and harmless comments might result in an employee’s dismissal. “Such conduct, whilst being a breach of the policy, would not constitute a breach of the employee’s duty of good faith under the contract of employment and would not cause damage to the reputation or interest of the banks,” FSU’s letter said.

And yet, “a conversation about the colour of the tea cups at the workplace, who is winning the footy tipping competition, or what day of the week Commonwealth employees are permitted to wear casual clothes are examples of conversations that would constitute a breach of the policy as it is currently worded,” FSU continued in its letter.

At least one Commonwealth employee feared the social media policy would be used as an excuse to axe employees the bank wants to fire but otherwise can’t. “Because it’s subjective I have a feeling the policy is going to be used more as an excuse than the real reason [for firing someone].”

It’s worth pointing out that whomever leaked the bank’s social media document would certainly be subject to firing under the policy’s provisions. Furthermore, any employee commenting in an unofficial capacity here on this article at The Financial Brand would probably also lose their job. In fact, if you work at Commonwealth and you’re reading this, you had probably better report yourself, just to make sure you’re in compliance.

Backed Into a Corner, Now Backing Down

Commonwealth initially defended the policy but has now backed down, saying it is open to discussions with the Finance Sector Union.

Commonwealth is now promising to ”amend the policy where it is considered reasonable to do so to ensure that all of its staff continue to be treated fairly”.

Legal expert Peter Vitale told Startup Smart that he is unsure whether business have the right to force any employee to delete a negative comment from their Facebook account, particularly if it is made by a third party.

“There is a legitimate concern there that you are exposing employees to conditions beyond employment. There are situations where those comments may have something to do with being in a union and so on,” Vitale said in an interview.

Marilyn Tagocon, a former Chase analyst, was canned after telling her employer she blogged about historical fiction in her spare time. She had been unaware of the bank’s policy until a coworker told her the company’s code of conduct included online restrictions. Tagocon was sure her blog, which she writes under a pen name, didn’t fall under the policy, but to make sure she talked to her boss. She was given a choice: her job or her blog. Tagocon refused to take down her blog and she was fired. Now Chase is staring at a nasty wrongful termination lawsuit.

“I’m not sure the intent of the rules was to restrict employees in this fashion,” Jim Kim wrote at FierceFinance. “They ought to be able to pursue hobbies that have nothing to do with work and pose no issues, even if those hobbies involve an online component.”

A similar recent situation involved an NBC employee fired for posting old footage from the “Today” show online. The clip from 1994, which showed Today hosts dumbfounded by the internet, generated massive online buzz. Once it went viral, the Today decided to do its own entire segment which it then posted online.

Establishing a social media policy to protect a financial institution’s brand is a good idea, but you have to wonder if Commonwealth wouldn’t have been better off with no policy than the Big Brother version it rolled out. Commonwealth threatened to terminate employees for failing to censor and conspire against their online friends crosses the line, and now it’s stuck with a big, painful distraction.

Section 1 in Commonwealth’s social media policy contains loads of prophetic irony: “The ever-changing and inherently public nature of online communication presents a range of challenges to the Group in safeguarding our commercial activities, our brand and reputation.” Indeed it seems the bank still has some way to go before its social media challenges turn into opportunities.

For all its faults, Commonwealth’s policy does contain one salient clause. Under Section 3 it says, “As a general rule, you should be guided by your common sense.” Such a simple guideline should sufficiently cover all employee behavior — not just social media — but unfortunately it doesn’t.

If your financial institution is planning to introduce a social media policy, you should be encouraged to see what other banks and credit unions are doing. Visible Banking points out two you examples you can check out, one from US Bank and the other from Monroe Bank & Trust.

Just be sure you exercise some common sense. You don’t want to blindly copy the mistakes of other financial institutions. Just because another organization has a social media policy doesn’t mean that policy is any good or right for you.

1. Introduction
The ever-changing and inherently public nature of online communication presents a range of challenges to the Group in safeguarding our commercial activities, our brand and reputation, our customers and, more importantly, the security and safety of our employees.

We recognise that you will use social media channels outside work time in a private capacity. However, such use can still have an impact on your employment. You are required to act in the Group’s best interests at all times and this extends to your participation in and use of social media channels.

As a general rule, you should be guided by your common sense and not display or post any information that may damage the Group in any way.

In particular, you must not use social media channels to:

We also recommend that you remain aware of your personal online reputation, security and safety at all times. You should be aware that, even when not discussing Group related matters, if you engage in inappropriate conduct it may still have an impact on your employment with the Group.

If you become aware of any such material you should immediately notify your manager and the Media & Communications team via email on [email protected] You must also provide the Group with all reasonable assistance in relation to any investigation into such material and in relation to the removal or deletion of such material.

You must not at any time purport to speak on behalf of the Group through social media channels without the express prior approval of the Media & Communications team.

The Group’s Media Policy provides a detailed overview of those people authorized to represent the Group in social media environments and it is important you understand and have proper authorization before participating in this capacity. You can contact the Media & Communications team via email on [email protected] if you are unsure of how these apply to you.

6. Breach
Failure to comply with this policy is a serious disciplinary matter and may result in disciplinary action being taken against you, which may include termination of your employment.

7. Miscellaneous
This policy may be subject to change from time to time at the Group’s discretion. It does not form part of your contract of employment or any industrial instrument that applies to you.