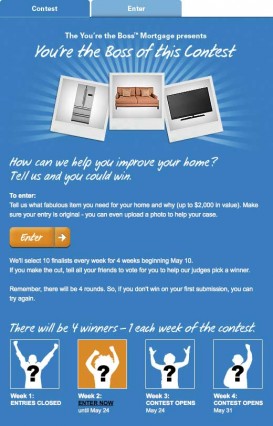 Coast Capital Savings hopes its Facebook-based “You’re the Boss of this Contest” will double the credit union’s fan base in four weeks. In the contest, participants name their prize, then compete in a vote to determine the winner.

Requests for prizes must be home-related, and the value is capped at $2,000. Ten finalists are selected from the entries each week over a period of four consecutive weeks.

The contest starts on May 10 and ends June 14. It is open to all residents of British Columbia who are 18 and older.

Even though the nexus of the promotion stemmed from Coast Capital’s innovative, flexible “You’re the Boss Mortgage” product, the credit union says it is not a sales-focused contest.

“The core purpose is not to generate direct mortgage business,” Coast Capital spokesperson Erin McKinley said. “The product connection is a soft-sell.”

According to Coast Capital, the contest is designed to raise awareness of its product as well as Coast Capital’s overall brand.

“ROI in social media is not measured in dollars and cents,” McKinely said. “It’s measured in brand affinity, customer loyalty and other soft metrics.”

“If we sell more mortgages, great,” she added. “If not, that’s okay because social media is about hearts and minds and that’s what we’re after with this contest.”

For the campaign’s goals, Coast Capital was hoping for 10,000 page views on its Facebook page. They hit 6,123 views in the first week, with three weeks still to go.

“That’s a 67% increase since the contest started,” McKinely observed. “It looks like we’ll surpass our goal by a significant amount by the time the contest ends.”

“We have modest expectations of our social media efforts,” McKinely added. “But this contest is demonstrating that we should perhaps revise our expectations upwards with regard to social media metrics and goals.

How are the 10 finalists selected each week? A panel of five Coast Capital employees sift through all entries and pick their favorites. Selections are based on three criterion — originality, humor and sincerity — helping judges evaluate entries with simple questions like these:

“Some entrants are sneaky,” she added. “They’ve upload cute photos of big-eyed babies and cats, and our misty-eyed judges have found it tough to ignore those entries.”

“We originally thought about using a 5-point rating system for judging entries,” said Coast Capital’s McKinely. “But we were concerned that this would be too much work if we received a lot of entries.”

Once the judging panel has the ten finalists selected for each week, the finalists are listed on Coast Capital’s Facebook page where entrants’ friends and family vote on them. Judges select a winner following seven days of public voting.

Everyone who wants to cast a vote for one of the weekly finalists must first “like” the Coast Capital page. This means the credit union picks up new “likes” from both people who enter the contest as well those voting in it.

Coast Capital says its judging panel will “strongly consider” the number of votes each finalist receives before choosing the winners, but entrants who get the most “likes” for his or her submission may not be the automatic winner — something that would surely aggravate the top-vote getter if they didn’t get their self-selected prize.

Key Question: Are participants really “The Boss of This Contest” if the final decision about winners rests with Coast Capital judges?

In the first week of the contest, Coast Capital received 239 entries. Among the items requested by the ten entrants selected by judges as finalists for public voting:

In total, the ten finalists in the first week had accrued over 600 votes, with the top entry getting over 120. And remember, each voter has to “like” Coast Capital’s Facebook page before they can cast their vote for one of the finalists.

The contest was developed in partnership with Coast Capital’s creative agency, Rethink.

”When companies start to use social media platforms, they need to have a solid strategy and clearly articulated objectives,” says Ailsa Brown, group account director and partner at Rethink. “Coast Capital had done that legwork, and was already actively using Facebook. Having this contest was a natural fit to continue building out their Facebook community and attract new fans.”