Nearly 60% of those working in financial services think that the industry has not been effective in utilizing social media so far.

That is one of the many findings in “Made in Heaven or Marriage From Hell?” a report on social media in the financial sector. For the study, global communications firm Cicero surveyed 158 financial executives from around the world. Less than half said they were making effective use of social media.

If you work in financial marketing, you should definitely check out the 28-page report. Cicero presents some interesting data, but many of the facts and conclusions don’t correlate with reality, or even the results contained within the report itself. Cicero expresses a clear bias in favor of social media, so you’ll need to keep an open mind and approach the study with at least some degree of skepticism.

Ignore This at Your Own Risk

Cicero Conclusion: “Social media is an opportunity that can no longer be ignored.”

Evidence suggests the contrary. If you’re ignoring social media today, there’s nothing in Cicero’s report that will convince you to change your mind.

Indeed there are many financial institutions that have ignored social media, and quite successfully. There’s nothing to indicate that those who have ignored social media are struggling, whether that be from a branding, communications or growth/performance perspective. You can, however, find many banks and credit unions that are struggling with their social media efforts. But you won’t find one where you can say, “This financial institution would be more successful if they just stopped ignoring social media.” There is no proof. None.

What would happen to your financial institution if they didn’t have a presence on Facebook or Twitter? Probably nothing.

Social media is just another communications channel. It’s a choice you have to make. But it isn’t a massively foreboding imperative, as Cicero asserts.

Cicero Fact: One third of respondents are worried about how to measure the success of social media activity.

When Cicero asked which methods were most effective for monitoring the impact of social media, 24% of financial executives admitted they “don’t know.” Nearly one in three felt things like re-tweets and number of Twitter followers were good metrics. 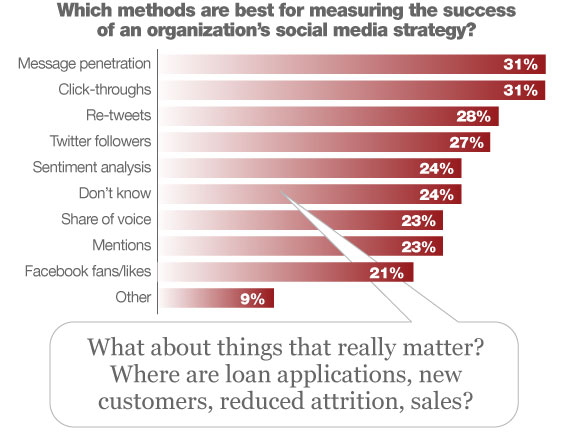 Social media will continue to struggle as a marketing/communications tool until researchers can draw a line — even a dotted one — between tweets, fans, followers, Wall updates… and the bottom line.

It’s worth pointing out that the number of social mentions a firm receives is not necessarily a byproduct of its social media strategy. Usually, people only talk about a brand following an experience they have with a company’s product/service. If your organization has sales or service problems, your social strategy will likely be all apologies. If your organization has sales and service success, your social strategy will be all thank-yous. That makes social mentions a better measure of a company’s sales- and customer service channels, not the strength of its social strategy.

Social Media = The Future of Communications?

Cicero Fact: “25% of respondents felt that social media offers new ways to communicate to tomorrow’s consumers. 30% of those surveyed see social media as the future of communications.”

This means that the vast majority of respondents (75%) don’t feel that social media is a new way to communicate with consumers, and 70% don’t see it as the future of communications, a point Ron Shevlin, Senior Analyst with Aite, noted in his review of Cicero’s report.

That three in four financial institutions are unsure about social media’s future role and power should be seen as a good thing. Considering how severely banks and credit unions have been goaded into social media over the last five years, it’s refreshing to see financial marketers finally applying a greater degree of skepticism.

Cicero Fact: “40% of financial institutions said they were interested in social media because their brand is being discussed online, but one-quarter of respondents are daunted by the volume of social media traffic and how to monitor/manage it.”

Social media analysts often leave financial institutions believing that there is this vast, mysterious conversation about their brand occurring somewhere out in cyberspace. For most banks and credit unions, there isn’t. Consumers just don’t talk about banking in online social circles all that often. A study by The Financial Brand found financial institutions were mentioned only once per month for every $100 million in assets they have. So unless you’re one of the über big boys, you have no reason to sweat the miniscule volume of social data you’ll have to monitor and manage.

Cicero Fact: “41% were interested in discussions of their brand or firm occurring on social media.”

And what about the other 59%? Either they didn’t care what was being said, or (more likely) were conceding that people did not discuss their brand on social networks.

Cicero Conclusion: “Social media provides the financial sector with a form of repentance by offering a way to communicate and engage with consumers through innovative channels.”

Do banks need to repent? Maybe. But does it take a “new and innovative channel” to find redemption or to say you’re sorry? Nope.

Truthfully, there are probably better ways to say you’re sorry and make amends than through tweets and status updates. If you’ve wronged someone so severely that you need “repentance,” there probably isn’t much Twitter or Facebook is going to do for you. If you got caught cheating on your spouse, would you apologize through Facebook?

Cicero Conclusion: “The financial sector lost trust among the public during the financial crisis. Now social media arguably offers the sector a real opportunity to rebuild its brands and trust among consumers.”

As study after study has shown, people trust their own bank, but not “banks” in general. While a handful of megabanks have very serious trust issues, the truth is that most financial institutions are not facing a crisis of trust. The industry has a big black eye, but the need for individual banks and credit unions to repair and rebuild trust is actually very low. There may be reasons for financial institution to use social media, but the oft-cited reason “to rebuild trust” is not among them. If blown trust was indeed a problem, social media would not be the tool to use.

Cicero Conclusion: “Social media can offer the financial sector a new means by which to engage with its customers — to understand them better and slowly rebuild relationships.”

Yes, social media is a new means of communication. But that doesn’t necessarily mean it is an efficient tool, nor the one financial marketers should worry about most. Financial institutions have — for a long time now — had other means to figure out what’s on consumers’ minds — e.g., market research and focus groups. They’ve also had other forms of communication at their disposal — e.g., email. That doesn’t mean financial marketers effectively utilize these other tools. For many banks and credit unions, social media just represents one more channel where they will stumble. Financial institutions have mounds of (arguably more valuable) data they either ignore or under-utilize.

There’s a Difference Between Meek and Timid

Cicero Conclusion: “The financial sector has been slow to embrace the opportunities that social media provides.”

This simply isn’t true. Back in 2010, banking ranked third among the most active industries in social media, far outpacing consumer electronics, apparel retailers and travel/tourism. Today, nearly three in four financial institutions are actively using some form of social media. Banks and credit unions are falling all over themselves chasing social media rainbows.

But that doesn’t stop media outlets and consultants from rushing to label banking as “behind the times.” Nearly every story and every report published about social media in the financial industry includes some reference to how slowly banks have adopted it, truth be damned. It is simply assumed and accepted as fact that financial institutions are timid with any new innovation. Not true with social media.