Subscribe Now Get The Financial Brand's FREE Email Newsletter
Back in late 2009, Chase Bank became one of the first financial institutions on earth to use social media channels to give money away to charities -- millions of dollars. Five years later, the bank's "Community Giving" campaign has become one of the most celebrated social media success stories in the financial industry, and has helped elevate Chase to preeminent status among banking's social media elite.

Chase Bank recently took top honors in the Social Media Power 100 and many of you requested an analysis that layered context into the ranking list. So here’s my stab at helping to provide some depth to what the Power 100 list can’t provide. So, how well is Chase “Community Giving” utilizing social media? Let’s take a closer look at where they rock awesome and where they could use a little (or a LOT) of help.

Social media — just like traditional marketing — should be cohesive across all channels. There is clear consistency to Chase’s social media strategy, which remains firmly rooted in promoting charitable activities, civic organizations,  eco-green ideas, and other such things that make the world a better place. Nowhere in the Community Giving program will you find posts about financial products, interest rates or new branch locations.

In just the last month alone, they posted something for Earth Day, Women’s History Month, World Water Day, National Crochet Week and more. Almost all posts were matched with a corresponding custom-created image featuring their stick-person artwork — a signature element developed specifically to give the Community Giving program its own branded look-and-feel.

Their YouTube channel stays on-point, but is mostly a highlight reel for the Chase Bank’s “American Giving Awards” (a made-for-TV awards show that Chase spun out of its Community Giving campaign). However Chase hasn’t posted anything to YouTube in three months. Consistency is as important as quality when it comes to social strategy.

It’s pretty obvious Chase decided to focus on Facebook over other social channels. Their Twitter feed and YouTube channel feel somewhat neglected compared to the frequency and quality of posts on Facebook. If you only looked at Facebook their grade would be much higher, but their halfhearted effort in other social channels brings them down a notch.

Read More: Make Social Media Promos Out of Money You Already Give Away

How good is the material Chase Giving puts up? Is it stuff people really want to see? Or just fluff and filler?

Some days Chase does nothing more than tweet inspirational quotes, which are on-topic but don’t exactly create a riveting content strategy. At least on Facebook anyway, they take the time to create interesting, visually-appealing images to go with their quotes. Yes, it’s filler, but it is filler that’s done well.

Chase does post some really great content, too. They are at their best when it’s about the activities their Community Giving program supports, like planting trees in El Salvador or how crocheting empowers women in Uganda to rise above poverty. The posts are informative and not preachy or political, and the accompanying pictures are stunning.

Chase Community Giving uses their creative department to coordinate with their social campaigns quite well. Their Facebook page is filled with custom photography of the charitable organizations promoted, but also professionally designed images and promotions advance their brand and bring some real polish to the page.

The production quality of their YouTube videos is quite high. Videos focus on the organizations that have participated in the American Giving Awards. 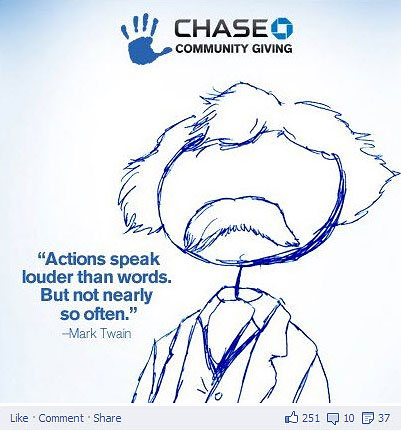 This one is a bit tricky. Judged solely on their Facebook page, they’d get an A grade. But we’re looking at Twitter and YouTube as well…

Chase has acquired a large number of followers on Twitter, but they’re simply not seeing any engagement. Each of their posts receives a very low percentage of retweets, if any at all. Their tweets trigger few @replies and almost no “Favorites.” It’s not that they aren’t trying — specific calls to action and requests for retweets are common in the Chase timeline. It’s just not working.

Facebook is where all the magic happens, with people commenting on a high percentage of posts. The pictures that accompany their posts catch people’s attention and really seem to resonate with the audience. One post in particular from March 29th focused on making others happy. Not only did it include a typical call to action, but it asked their audience to tag friends and pass the message along — a creative idea that generated one of their most-shared posts last month. Unfortunately, their low engagement on Twitter and YouTube pulls down what would have been an outstanding grade otherwise. 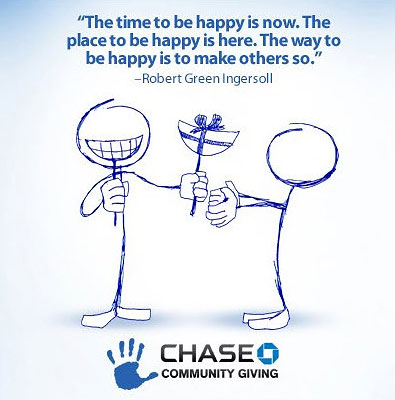 This may be the most subjective of all the categories but here’s how it works: after reading a post or a tweet, how likely is someone to say, “Holy Smokes! That was [funny, cool, useful, informative, thought-provoking, etc.].” This is what Jason Falls, founder of Social Media Explorer, calls “measuring the awesome.” It is the difference between “meh” and “omg.” 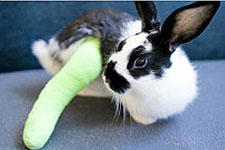 Chase Giving combines timely posts with interesting information then ties it back to one of the charities they support. For instance, around Easter, they posted about bunnies being the third most popular pet after dogs and cats and how an LA-based charity they support rescues abused bunnies, and put up a picture of a bunny with a broken leg in a cast. Holy smokes! That’s heart-breaking!

Chase’s high-quality images really go a long way to generating a ‘Holy Smokes’ reaction to their Facebook posts. They post pictures of children and adults who benefit from the causes Chase supports, giving fans a chance to check-in on the progress those organizations are making. Holy smokes, now that’s a good content strategy for a Facebook page.

Conclusion: Chase Community Giving is rocking some serious awesome over on Facebook. They have figured out what works with their community and aligned it with a clear strategy that delivers on corporate goals (awareness of their charitable work). Their Twitter and YouTube accounts needs some help, but in these channels Chase falls right in line with what the rest of the pack is doing. While their presence on Twitter and YouTube doesn’t stand out, it isn’t awful. It’s just in need of some TLC.

I’ve always been a big fan of picking one social media channel and rocking awesome at it. Once you’ve done that you can look at what other social channels make sense for the brand. It’s always best to be amazing in one place than mediocre in five. Chase Community Giving is amazing on Facebook. Now, it’s time to figure out how to be equally amazing on Twitter or YouTube.