A unique partnership between the biggest bank in the U.S. and the world’s #3 social network yields marketing synergies.

“We talk to a lot of leaders of small businesses about the challenges of integrating Twitter into their ongoing marketing efforts.”
— Russ Laraway,
Head of SMB, Twitter

Four million customers will be eligible for the program, including those using Chase Business Banking, Chase Ink credit cards and Chase Paymentech. Not all will reap the benefits though. The Twitter ad packages will be awarded in $100 increments to 40,000 small businesses — one in 100 of qualifying Chase customers.

The $100 credit can be used on Twitter’s Small Business advertising platform, which became available to all U.S. businesses in April 2013.

Right now, it’s unclear precisely how and when customers will be able to claim their ad credits, but Chase promises more details will be available by early fall.

In its agreement with Chase, Twitter will also provide access to research, best practices, and workshops focused on helping small businesses better understand how to use the social network for growth.

“We talk to a lot of leaders of small- and medium-sized businesses,” says Russ Laraway, head of Twitter’s small business division. “We hear about the challenges of integrating technologies such as Twitter into their ongoing marketing efforts.”

Chase and Twitter will host events around the country exclusively for the bank’s small business customers. The first is about “Effective Social Media Strategies for Small Business.”

Chase and Twitter will also be jointly publishing content via two new Twitter accounts: @ChaseSmallBiz and @TwitterSmallBiz. The pair says they will be posting videos, infographics, white papers and a how-to guide to demonstrate the value of Twitter. You can also follow along with the conversation using the hashtag #ChaseSocialBiz. 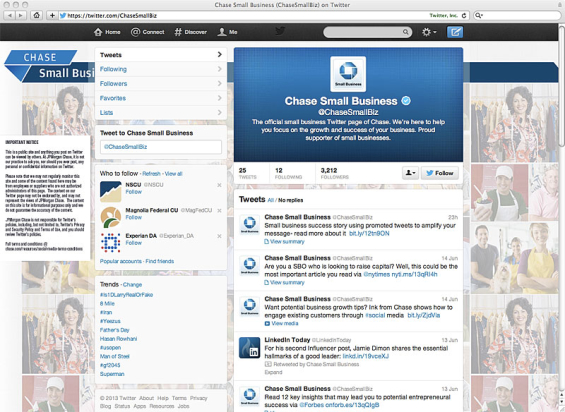 The arrangement creates obvious synergies for both parties. Chase can offer its customers a nice perk, and Twitter can market its ad services to an important — and tricky — market segment with relatively little hard cost. Trial offers are an effective way for Twitter to grow new relationships, and many small businesses are sure to feel a sense of gratitude to Chase for the gift.

If it only takes $100 to persuade a business owner that marketing on Twitter is worthwhile, then Twitter’s partnership with Chase will definitely pay off.

The deal with Chase represents Twitter’s second major push into the small business market — both times co-branded with a banking partner. In November 2012, Twitter forged a similar pact with American Express to offer around $1 million in credits as part of the financial giant’s Small Business Saturday promotion.