Subscribe Now Get The Financial Brand's FREE Email Newsletter
With a slight twist of marketing irony, BECU is using traditional media to broadcast comments about the credit union that members have left on social networks.

To produce what BECU dubs the “Share” campaign, the credit union tapped their agency partner, Seattle-based DNA, who spent hours going over Twitter, Facebook, Yelp and Pinterest to find out what people were saying about BECU. The agency then tracked the commenters down and asked if they would be willing to be a part of the campaign. About 30 agreed, and their comments and images are being used in the campaign.

“We listened to what members are already saying, then putting it verbatim into the advertising,” said said Alan Brown, principal and managing director of DNA. “There isn’t any spin here — it’s just a reflection of the reality that is happening.”

“It’s not every day that someone asks you to be in a television ad,” said Zachary B., a BECU member. “I’ve had varying bank experiences and by far the best one that I’ve had is with BECU. It’s a pleasure to return the favor.”

To facilitate media coverage of the campaign, BECU built a special “Share” page on its website where you can easily find TV ads and a billboard. 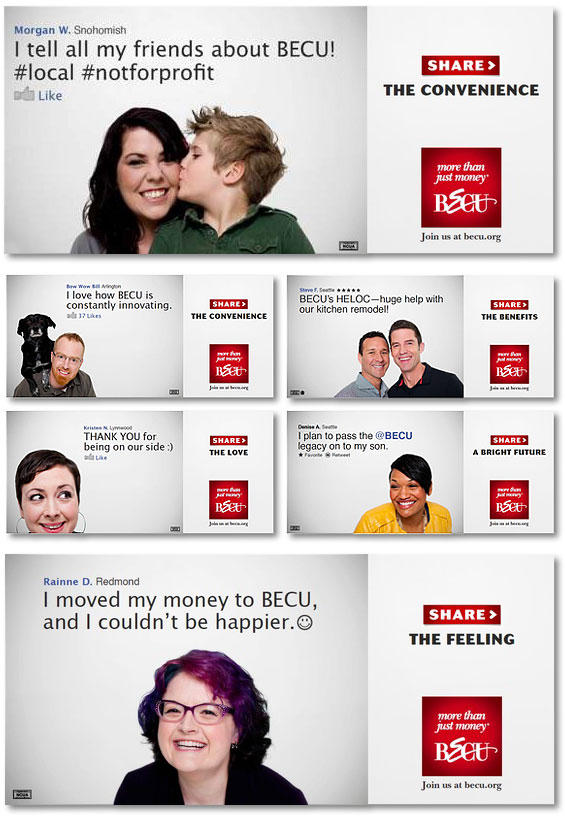 The “Share” TV spots captures members’ unscripted testimonials — their actual words — about BECU on social media. The manner in which the commercials were constructed is creatively clever.

This is one of the real tweets captured in BECU’s “Share” campaign. After Ms. Powell was contacted by the credit union’s ad agency, she appeared in a TV spot filmed back in early March.

“Up to this point we have been speaking collectively for the membership,” said Stephen Black, VP/Marketing at BECU. “With this campaign we are letting more members speak in their own words, in their own environment where they chose to share about us.”

“The ‘Share‘ campaign is the BECU brand as voiced by our members,” Black explained. “We love seeing the real thoughts and opinions of our members come through our social media interactions with them every day. Their stories inspire us and move us. We wanted to share them with the community.”

“People share their love for BECU every day — in face-to-face conversations, on Facebook, on Twitter, on Yelp, and on blogs,” Black added. “It is a one-of-a-kind campaign bringing real member comments to life.”

BECU Is No Social Media Slouch

BECU is active in just about every major social media platform there is, with the exception of Google+. They have links to Facebook, Twitter, Pinterest and YouTube on their homepage. They even have a link to Yelp.

BECU has garnered around 16,000 ‘Likes’ since first creating their Facebook page back in January 2008. They have an additional 3,187 followers on Twitter, where the credit union has been active since August 2009.

On YouTube, BECU’s six videos have been viewed 49,343 times. And they are one of the more successful financial institutions on Pinterest, with 541 followers and 10 ‘Likes.’

They also have 1,190 followers at LinkedIn, but don’t use that channel actively for much of anything besides recruitment. They aren’t ignoring LinkedIn though (as many other financial institutions do). Within hours of launching the “Share” campaign, BECU had posted fresh “Share” graphics to its LinkedIn page.

They have an RSS feed for news and press releases, and even publish their rates out via a RSS feeds.

All this social media activity is enough to push BECU into the list of the “Power 100,” a list of the top banks and credit unions using social media today. (Note: This list is almost finalized and will be published on the site soon.) This is no minor accomplishment, as the Power 100 ranks all financial institutions in English-speaking countries around the world. That means BECU is among the ranks of BofA, Chase, Ally, Barclays, HSBC and other social media powerhouses. Only about 20 credit unions will crack the top 100.

With 800,000 members, 40 branches and more than $11.0 billion in assets, BECU is the largest credit union in Washington and one of the top five financial cooperatives in the country. In 2012 alone, its membership grew about 8%, with the addition of 56,000 new members — +18% over the last two years.