Subscribe Now Get The Financial Brand's FREE Email Newsletter
Who's adding the most followers? Does tweeting more boost follower counts? Answers to banks' tough Twitter questions in this exclusive study from The Financial Brand -- follower growth, tweeting efficiency and other performance metrics for over 300 U.S. retail banks. The hard data doesn't lie.

This study encompassed 314 banks on Twitter, estimated to represent around 4.2% of all U.S-based deposit-taking retail institutions in the U.S. and at least 20% of all such banks on Twitter. Only banks that sent at least one tweet from a public Twitter account with a customized profile were included. Banks with uncustomized or protected accounts, and those with no tweets or followers were ignored. This is believed to be the first and only public study of its kind in the retail banking industry.

If you took the 314 banks in this Twitter study and picked one right in the middle (#157, the median), this is what that bank would look like: They would have launched their account in late September 2009, accruing 277 followers since then — an average of one new follower gained every four days. During that time, they would have sent around 330 total tweets, or one about every 3-4 days. They’d follow no more than 100 accounts back.

A total of 67 accounts (21.3%) were found to be dormant or abandoned entirely. Accounts considered dormant or abandoned did not send a tweet in at least the last 6 weeks. That means more than one in five banks launching a Twitter initiative gave up (21.3%). This is nearly identical to the number of credit union Twitter quitters The Financial Brand identified back in February — 74 of 350 credit unions studied, or 21.1%.

But banks didn’t roll over as easily as you might suspect. The average bank quitting Twitter sent an average of 128 tweets over a period of 1 year and 9 months before throwing in the towel. 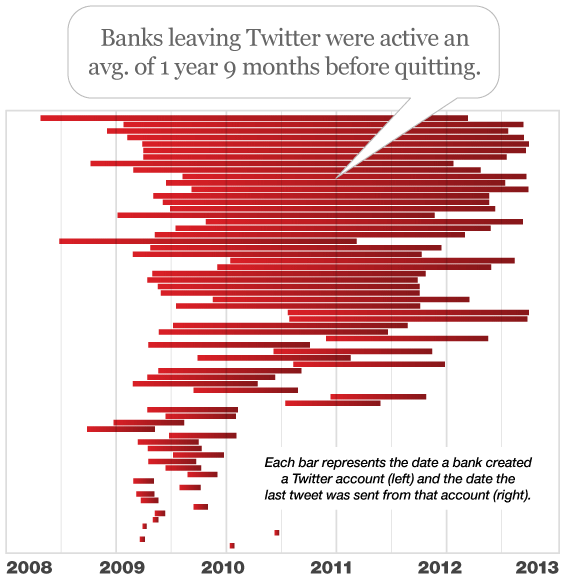 The bank on Twitter longest before surrendering — Foster Bank — had created their Twitter account way back in April 2008 and kept it account active until March 2012. Their 1,527 followers haven’t heard a peep from them in seven months.

Another bank walked away from their account after sending 1,107 tweets over a period stretching two years.

18.4% of banks at least doubled their follower base in the last year, but only 15 total (5.3%) saw increases of more than 200%. The average annual growth rate was 90%. The median, however, was only 51.1% — meaning half the banks studied only added one new follower (or less) for every two followers they had the year prior. 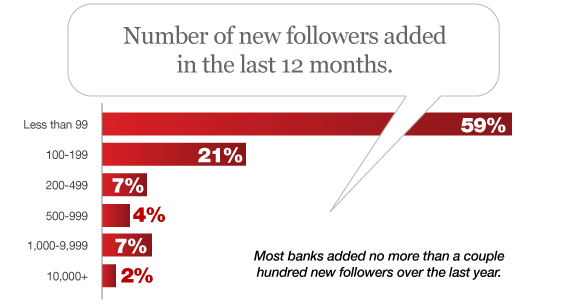 Of those banks actively tweeting in the past year, one in four averaged at least one tweet per day. 50% of banks studied sent less than one tweet every three days. One in 10 banks (11.3%) sent fewer than 20 tweets… that’s total — all year long.

One way to evaluate banks’ use of Twitter is to compare the number of tweets they send to the number of new followers they add. You could call this a “tweeting efficiency” ratio. Those banks who send out few tweets but get the most followers in return have a “high tweet efficiency,” while those who send out disproportionately more tweets than they get followers could be considered to have a “low efficiency.” Here are the top 10 most efficient tweeters — those who yielded the biggest bang for a minimal investment. Bottom line: Sending out a bunch of tweets is no guarantee you’ll get a ton of followers.

Sorry, Not Following You

Social media experts are constantly nagging banks to use social channels to “listen.” Well, it’s pretty darn hard to “listen” on Twitter if you aren’t following anyone. Sure, banks might be using social media monitoring software… but you know most aren’t.

The average bank follows one account for every 3-4 followers they have. Of the 314 banks studied, 40 follow more accounts than they have followers.

Banks that follow fewer than ten accounts will struggle to ever break 1,000 followers themselves — most will have 175-300 followers.

One common theory among social media experts is that you can boost the number of Twitter users following you if you go out and follow a bunch of accounts yourself. This theory does seem to bare itself out in the study’s data; those banks who added the most followers also started following the most new accounts. 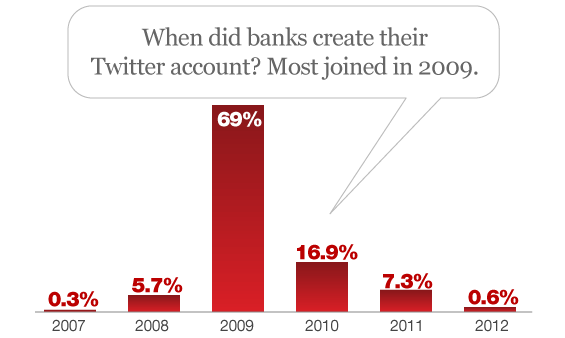 There doesn’t appear to be any correlation between when accounts were created and follower growth. In other words, there is no real, significant advantage (at least in terms of follower growth) to being an early adopter.

There seems to be only one thing that can spike massive follower growth: Twitter Verification. Only banks big enough to partner with Twitter can get verified because they are the only ones who can afford to pay for promoted tweets and accounts. (Twitter only verifies accounts for celebrities and its advertisers.) Basically, if you’re big enough, you can buy followers. Only three of the following 15 accounts aren’t verified by Twitter: USAA, USAA Help and Citi Jobs.

Why Don’t More Banks Give Up?

It makes you wonder… Why don’t more banks just give up already?

There are two kinds of financial institutions on Twitter: a handful who take it seriously (mostly big banks)… and everyone else, who should probably ask themselves, “Why bother?”

Many are just going through the motions, spewing lame tweets about rate changes or happy holiday wishes. These guys can probably find more productive things to do with their time.