Subscribe Now Get The Financial Brand's FREE Email Newsletter
Bankers Trust's content marketing site gets promotion from employee influencers, which helps the influencers promote themselves as 'go-to' bankers. Effort begins with internal training in what you do and don't do on LinkedIn, bank's platform of choice.

In an era when the face of a financial institution may be digital or human, a middle ground can be using social media channels to help establish the expertise of a bank or credit union’s employees. Thought leadership delivered by employees using LinkedIn has helped Iowa’s Bankers Trust Co. strengthen the images of both the bank and individual bankers.

The outreach taps into a broader effort to provide financial information and education to both consumers and small businesses. The $4.5 billion-assets bank launched the Bankers Trust Education Center in 2017. The center is the bank’s content hub, delivering articles, infographics, and videos produced by specialists on the bank’s staff working with Marketing.

New content appears regularly on personal finances and business issues. Consumer subjects include getting ready for tax season, spring cleaning personal finances, teaching children about money, and multiple aspects of budgeting. For businesses, topics range from using purchasing cards to leasing versus buying technology to understanding the basics of blockchain. In 2018 the site had about 50,000 page views.

Emily Abbas, SVP and Chief Marketing and Communications Officer, says the bank saw an opportunity to use the growing body of content on the hub site to keep bank staffers in the public eye, and to use these influencers to keep the bank itself in front of businesses and consumers.

“Our team constantly looks at marketing trends and best practices across industries,” says Abbas. “We noticed that not many banks, especially at our size and in our markets, were using LinkedIn effectively.” As the hub built up inventory, she adds, “it was natural to encourage our employee experts to share their articles and videos on social media.” 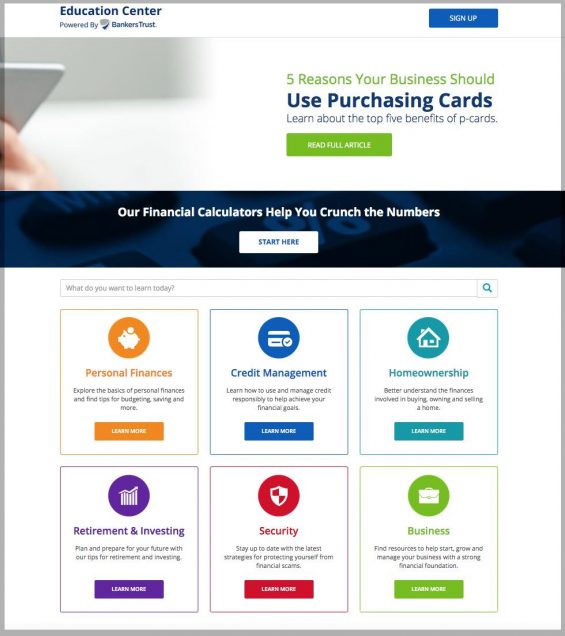 In late 2018, the bank went further and decided to include more sales team members in the program. The payoff was quick. Already they are building strong relationships with customers, prospects and others in their communities. “Sharing insights adds value to their networks and helps to keep them top of mind,” she explains. Pageviews of the hub rose 44% in the first quarter 2019, versus the first quarter 2018, before the bank’s sales team influencer effort began. 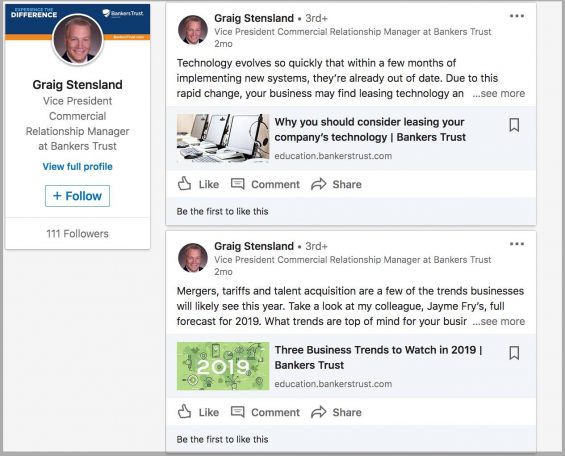 “And the quality of traffic that comes in from LinkedIn is very high in terms of engagement,” Abbas adds.

Management didn’t issue an edict that certain staffers would get on LinkedIn and start posting. They knew that social media can be botched. Abbas saw the need to show staffers the best ways to use the platform and assigned one of her marketers to develop and conduct a training program.

“LinkedIn 101,” designed for both the staff content experts and sales staff influencers, covers such basics as:

• Building your profile. Using a professional headshot, writing a headline that includes the bank’s name and the banker’s clear and accurate title, along with a strong personal summary. Completing profiles with work experience, community involvement, awards and honors, certifications, etc., is also covered.
• Making page updates. These can be made as things change, or on a regular schedule, such as twice annually.
• Engaging on LinkedIn. How to add connections, who to connect with, which companies and organizations to follow, how to post, how often to check LinkedIn and how often to post.
• What information to share. Some things suit LinkedIn business accounts, and other matters are best left for personal accounts on other platforms.

“LinkedIn 201” is chiefly meant for sales team members. “The idea is to position them as banking and lending experts in their niche markets,” Abbas explains. 201 goes into the value of thought leadership and influencer marketing; enhancing the LinkedIn profile beyond the basics of 101; how to use hashtags; and when it’s OK to share sales messages. The training also includes examples of successful efforts. 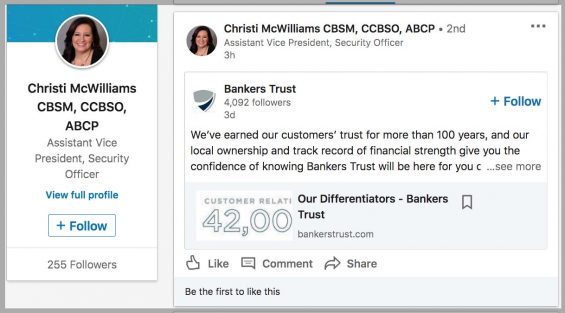 LinkedIn newcomers also receive some pointers on strategy, including:

“It’s an opportunity to extend the banker’s personal brand as well as the bank’s brand to a wider audience,” Abbas explains. “We tell them to think about what they post and what messages they want to send.”

The bank has more than 18 employee experts working on the education hub, each responsible for three content items a year. In addition to their own content, the experts are encouraged to share posts by other experts or posts under the bank’s name.

Efforts to create a base of influencers beyond the experts themselves, among the sales teams, began in the fourth quarter 2018 with a pilot group of five commercial lenders. In 2019 the effort expanded to include other bankers. Presently over 30 staffers from various banking areas participate. Marketing emails them a package of content that can be easily cut and pasted every two weeks. Besides material from the Education Center, the influencers receive curated national or industry news items to share.

“They select what to post for their connections and decide what comment they want to add to personalize the post,” Abbas explains. The influencers can also post other material on their LinkedIn accounts that they deem of interest to their audiences, so long as it qualifies under the bank’s social media guidelines. 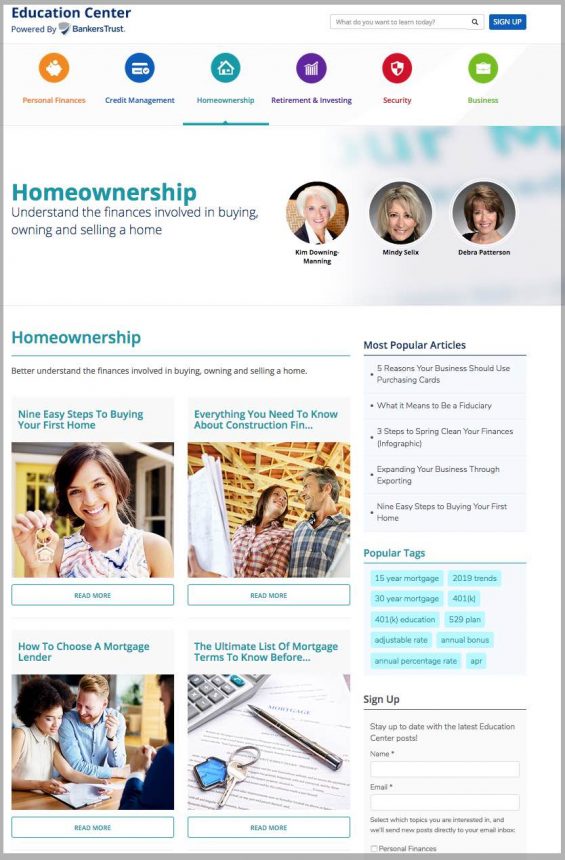 “Employees are encouraged to use the provided content as frequently as they feel comfortable doing,” says Abbas. “We make sure to internally recognize our Education Center experts who have the most engagement on their articles at the end of each month. And we often share our top-performing posts with our leadership team.”

Abbas says the expanded LinkedIn effort already seems to be paying off.

“We’ve seen success from the team members who regularly post content related to their area of expertise, the bank, and their community involvement,” says Abbas. The outreach has generated likes, comments, shares, and reach.

“These efforts help build reputation and increase mindshare, and also lead directly to opportunities for meetings and new business, which we’ve seen already,” according to Abbas. She says a few large deals have resulted from connections made.

Starting small, such as beginning with the initial pilot group of five bankers, helps get a program like this going in the right direction.

“Work with the willing, and when others see their successes, they will want to join in,” says Abbas.

Indeed, she says in the beginning the marketing team did the posting for the lenders, to get things moving.

“We quickly learned that it’s important they be directly involved and have some ‘skin in the game’,” says Abbas. Ongoing sharing helps, too, so that all participants learn best practices.

As exposure for the Education Center grows — it is also promoted via the bank’s own social accounts and some paid social media advertising — the bank’s content mix will be evolving. Abbas says the bank has begun developing higher-investment, higher-value content forms, such as ebooks.

“Having team members who can help push this content out to their networks makes the effort more effective,” she says.